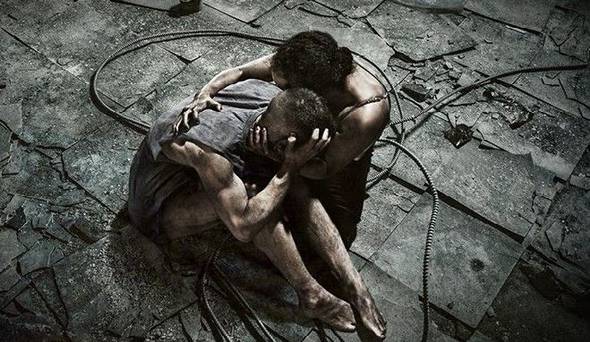 Director Rufus Norris’s production of the Scottish play for the British National Theatre places Macbeth squarely in a dystopian present.

Costumes are scruffy contemporary. The set is dominated by a moving ramp bridge, made from metal and wood; drapes are tattered black tarpaulin.

Macbeth, encouraged by Lady Macbeth, kills the king of Scotland in order to seize the throne. But concealing the regicide demands more and more killing, and a tyrannical murder spree ensues.

The three witches, who can be interpreted as a supernatural engine behind the malevolence, are here played as magical sprites, more witness than cause. Their skittering up and down poles is charming and nicely establishes the trees for Birnam Wood.

This is the great Shakespeare play about conscience; Kirsty Besterman as Lady Macbeth does a delightful meltdown, wracked with guilt and self-loathing. Macbeth (Michael Nardone) ties himself in knots justifying his tyranny.

The darkness is located not in the supernatural world, but rather at the core of ambition. As the United Kingdom juggles ambitious men and nationalism in the real world, this murky Macbeth casts some light on Brexit Britain.