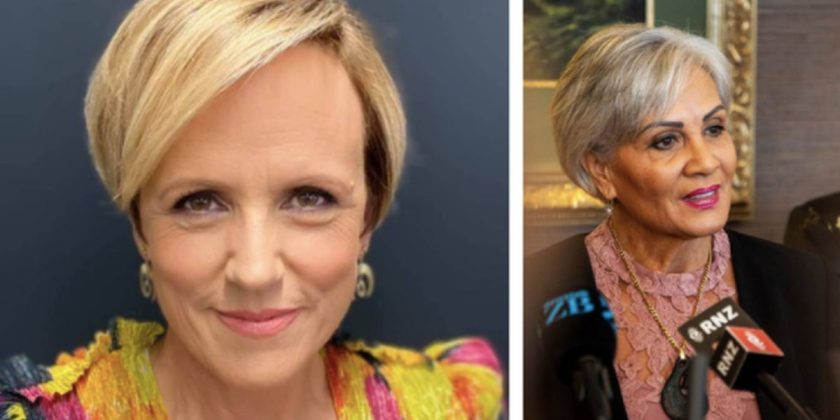 Broadcaster Hilary Barry has taken a swipe at Hannah Tamaki after the Destiny Church co-leader shunned controversy around the Tamaki family’s travels during level 3 and added that she would not take the Covid-19 vaccine.

Taking to social media, Hilary Barry wrote that “Jesus would get the jab”, hitting at the Christian values that the Tamaki couple say they stand for.

On Instagram, in the caption accompanying her image, Barry wrote: “An alternative Christian perspective for Hannah Tamaki’s followers”.

She sent a similar message out to her Twitter followers, where she bet $100 that Jesus would get the Covid vaccine.

“Jesus would take the church collection turn it into vaccines and vaccinate the lepers, homeless, sex workers and blind,” one person commented on Instagram.

Hannah Tamaki, who “escaped” Auckland with her husband on the eve of the latest Covid lockdown, has attacked her critics and declared she will not be getting the vaccine.

The Destiny church leader and aspiring politician has this morning lashed back at critics who have lambasted the couple’s decision to leave their home with just hours to spare before the city’s borders were closed to curb the spread of the latest community outbreak in South Auckland.

It’s a stance that’s troubled a leading vaccinologist who says not only is the church leader’s stance ill-conceived but could result in a lot of damage.

He personally would be getting vaccinated, trusting the science and need to do so.

The Tamakis sparked outrage when it was revealed they hurriedly left Auckland late on Saturday night for a speaking tour of their churches across New Zealand.

They addressed a congregation in Rotorua on Sunday morning before heading to the South Island. They are due to speak in Invercargill this weekend and were spotted in Te Anau on Tuesday.

But in a Facebook post this morning the Vision NZ leader said they had nothing to apologise for.

“We are not the ones to say sorry. The media need to apologise to our people, calling them poor and less intelligent and need to have the Covid vaccine.

“Everything in life is a choice. Make sure you choose for yourself, not be talked into something you are not happy to do.

“I’m not taking the vaccine. That’s my choice.”

“It is extremely harmful.

“It’s also ill-conceived and can result in a lot of damage.

“These people are highly respected in their community and they should be basing their communications on good trustworthy information, not misinformation.”

Petousis-Harris said church leaders in the past had been fabulous voices for public health and helping to keep their congregations safe.

She advised those in the congregations to listen and seek advice from family doctors about the Covid vaccine.

Epidemiologist Professor Michael Baker said these people were leaders in their community and with leadership came real responsibility.

While vaccination was voluntary, advising others the fact that you weren’t having it would clearly influence people.

“Your point is not to remind people it’s a personal choice, the point is to make a stand that you’ve decided not to take a vaccine and when you’re in leadership position that’s clearly going to have an influence on people.”

Baker said it was an unfortunate position to take given the nature of this virus.

“We know what the impact of Covid-19 would be if there was widespread infection in South Auckland for instance, where they’re based. Māori and Pacific leaders are saying the opposite. They’re urging their communities to vaccinate and, in fact, not only that but they are encouraging it to be prioritised highly.”

“Well he does get around, doesn’t he?” Bloomfield said in the 1pm press conference.

“The request of them has been clear, they should be minimising their interaction with large groups of people,” he added.

Bloomfield says he is confident Government has a “really powerful narrative” and “New Zealanders will take up the opportunity and make the decision themselves” regarding the vaccine.