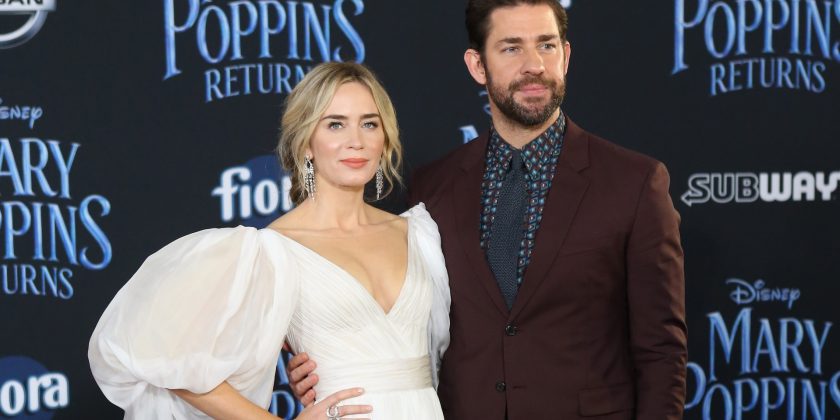 In case you needed any more convincing that John Krasinski and Emily Blunt are the love story we all need right now, consider this: the pair’s first date involved eating pizza at his apartment, and Blunt holds the story too dear to even discuss.

The husband-and-wife duo opened up about their meet-cute during a rare joint interview with The Hollywood Reporter published on Dec. 18. But, when conversation turns to specifics of their first official evening as a potential couple, Blunt gently pumps the brakes. “It’s so precious, I don’t want to talk about it. Is that all right?” she asked.

She does, however, reveal who made the first moves — although that point is in cute contention between the pair.

As the biggest year of John Krasinski & Emily Blunt's lives comes to a close with #MaryPoppinsReturns, the actors — part of our year-end Rule Breakers issue — give a rare joint interview and reveal why they've kept their careers separate, the reason they made an exception for #AQuietPlace, and how they navigate marriage, parenthood, famous friends and staying down to earth on the A-list. Link in profile. Photo: @andrew__hetherington

“Probably me, I think,” Blunt responded when asked who asked whom out. Feigning shock, Krasinski retorted, “Yeah, right.” When she counters that it was her, he offers his version of their history: “It was me asking for a while and you took some time, and then we finally had a date.”

Semantics aside, Blunt and Krasinski were clearly a match. A decade of dating, eight years of marriage and two little girls later, the couple has become one of the most adored pairings in Hollywood.

A large part of that likability lies in just how grounded they seem to be, as their humble pizza-first-date would suggest. And, according to Blunt’s Mary Poppins director Rob Marshall, what you see really is what you get.

“Neither of them has a jealous bone in their body. People think marriage is looking deep into each other’s eyes. No, it’s looking out and seeing the same life. Emily and John see the same life,” Marshall explained, calling them “old souls.”

This statement seems to be supported by the growing number of other celebrities who consider the couple to be close friends — think Matt Damon, Bradley Cooper, Jennifer Aniston, Jimmy Kimmel and Chris Pratt.

“They’re caring and kind,” Pratt told The Hollywood Reporter. “They’re always doing bits and making themselves and other people laugh.”

Emily Blunt and John Krasinski always kept their careers separate – until #AQuietPlace. Blunt sheds some light why the film was worth the risk of sharing a project, "It was the only idea that had come our way that seemed bigger than our marriage. The narrative of our marriage was not going to overwhelm this movie and this amazing opportunity for him as a director, as a filmmaker, as a writer." ?: @andrew__hetherington

In the couple’s own words, though, the secret to their successful marriage is that they love each other within the context of their relationship… but also as individuals.

“There’s a large fraction of stress that is taken out by someone who’s so supportive,” Krasinski said of his wife, elaborating, “Meaning, ‘You are directing this movie, so when you reach for your phone, I know you’re not trying to isolate me as your wife. You actually have something to do.’ I don’t have any of that pressure of, 15 percent of my day is explaining to my wife that I have a job to do.”

Added Blunt, “We’ve always allowed and rejoiced in each other having a very full life outside of the other one.”