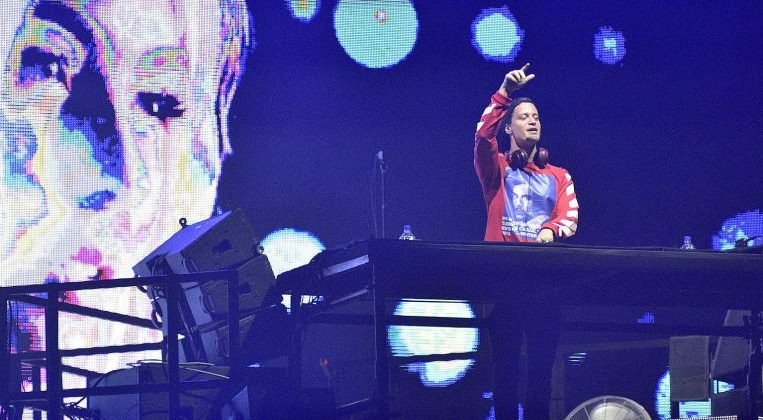 Perhaps it is fitting that the first full-scale EDM (electronic dance music) show at the Indoor Stadium, since the sold-out Swedish House Mafia farewell tour show in 2013, was by one of the best-selling DJ-producers in the world – 27-year-old Norwegian Kygo.

For almost two hours on Monday night (Nov 5), he pulled out all the stops for the crowd of 5,500. The original singers of his chart-topping tunes turned up, there were mesmerising visuals projected on the big cube atop which his DJ set up was located, and what felt like a constant deluge of lasers, pyrotechnics and confetti canon showers.

There were even multi-coloured lit-up wristbands and flags emblazoned with “Kygo Kids In Love Tour Singapore” given out to everyone, so that the crowd felt very much a part of the show.

The gig, his second here since a headlining set at dance music festival Ultra Singapore in 2016, was the last show of his worldwide Kids In Love tour.

He was ambitious in trying to cover all the bases and he certainly showed off his repertoire of hit after hit.

Kicking off with his collaboration with Imagine Dragons called Born To Be Yours, he delved into plenty of tracks off his sophomore album Kids In Love (2017) such as Sunrise and Remind Me To Forget.

But unlike the dreamy, chilled-out set of his last show here, he unleashed several tropical house tunes – a genre he initially built his career on – midway through the show, including the remake of Marvin Gaye’s Sexual Healing, Stay and Carry Me.

It was clear that the crowd preferred these numbers judging by the cheers the songs elicited. Kygo also threw in dance-pop crowd pleasers from other DJs, like Axwell and Ingrosso’s More Than You Know and Khalid’s Young Dumb & Broke.

The DJ shone in the quieter and more intimate moments, such as when he left the decks to tickle the ivories and just jam on an all-white baby grand piano, while accompanied by a four-piece string section.

It was also a lovely reminder that beyond a dance floor hit-maker, he is also a classically trained pianist with the chops to prove it.

The singers who joined him on stage, namely American Justin Jesso and Swede Sandro Cavazza, were the standout addition to the show that could otherwise have descended into standard EDM festival fare.

The latter started off with a beautiful acoustic interpretation lead by Kygo on piano and the string section. But as it built to its original, sun-drenched tropical house version, Jesso’s vocals powered up as well.

“He’s taught me so many things about music and life,” said Cavazza, before launching into Without You – the lead single featuring him on Avicii’s final EP, Avici (01).

In what proved to be a goosebumps-inducing memorial during the set, he sang: “I got to learn how to love without you, I got to carry my cross without you, stuck in the middle and I’m just about to, figure it out without you”, as he climbed down to the front of the stage to share the moment with the fans at the barricade. It was as poignant as it was celebratory.

While Kygo’s banter with the crowd was kept to minimum, his actions spoke louder than words. He may be the superstar, but he has no problems sharing the stage and letting his music do the talking.