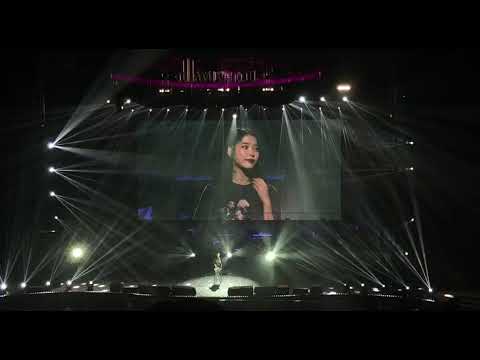 SINGAPORE – South Korean pop darling IU is ready to move on to a new phase of her career. At her first concert held in Singapore on Saturday (Dec 15), the 25-year-old told her fans: “I think it’s time to leave the young and cute IU behind.”

And her desire to mature as an artist was evident in her music and her performance. The concert, meant to celebrate IU’s 10th anniversary – yes, 10th; the singer debuted at 15 – was, as IU herself explained, a look back at her music career so far. And true to her word, she sang her cutesy, earlier hits such as Boo and Good Day.

But her passion came through strong during a segment of her concert featuring songs she penned herself such as Bbibbi and Palette, the latter of which is one of my favourite IU songs.

In a talk portion of the concert, the singer, whose real name is Lee Ji-eun, explained how much she enjoyed writing her own lyrics, and the performance of these songs gave her an edge and personality her earlier hits could not convey.

Another highlight of the concert was just how intimate it felt. Sure, she brought some elaborate sets and a whole crew of backup performers, but many moments in the almost three-hour concert were focused on just her as she showcased her clear, well-controlled vocals.

And while she belted out some power ballads and hit the famous three consecutive high notes on the “I’m in my dream” line in Good Day, her sweet spot is relaxed, pared down songs with a playful vibe that places her dreamy voice front and centre.

One such example was Gloomy Clock, which was a bittersweet moment as she dedicated it to someone she missed very much – presumably the late singer Jonghyun of Shinee, who wrote the song.

During the moments of audience interaction, she apologised several times for coming to Singapore for a concert 10 years into her career and promised fans she would return.

She also dedicated a Mandarin song – Karen Mok’s 1998 ballad Love, which has a splash of Hokkien in it – to Singapore fans, thanking them for singing along to her Korean lyrics.

And she gave not one, but two encore performances.

After the first encore, she left the stage and the credits rolled, but she came back.

Dressed in a black T-shirt, she lifted the ban on videography and photography and sang two more songs.

While her concert could definitely have done with a better sound system – which was at times jarring at my stall seats – and lighting, which was sometimes blinding, it was a concert with a clear message.

It showed an artist who has evolved from a teenager singing bubblegum hits to a confident young woman who is done with haters, is in control of her life and, most importantly, has learnt to accept and love herself.