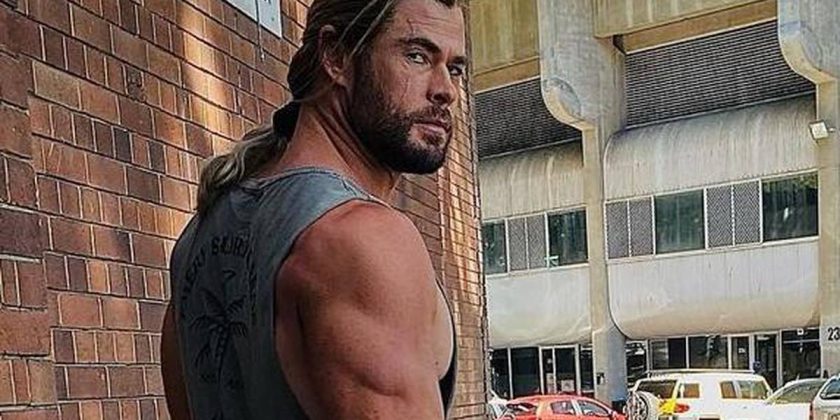 Chris Hemsworth isn’t usually one to be teased about his body.

However, the muscular actor was teased by his fans for “skipping leg day” after he shared a photo on Instagram on Tuesday.

The Hollywood star, who is known for his intense workouts, posted a photo of himself on the set of his upcoming Marvel action movie Thor: Love and Thunder walking hand-in-hand with one of his sons.

While it was hard to miss his huge biceps, his fans couldn’t resist pointing out the size of his legs.

“Holding my little man’s hand and asking him the age old question. ‘What do you want to be when you grow up’ ‘Dad i wanna be Superman’ Lucky I have two other kids,” Hemsworth wrote in his post.

While many people laughed at the cheeky caption, others were fixated on the difference in size between his arms and legs.

“Thor has been skipping the leg day,” said a third user.

One even wrote: “Damn Thor, how do you toss that hammer and not fall with those neglected legs my man? Double up those leg days and cut back on the arm and chest and get more symmetry.”

While the photo appears to show a pretty big difference between Hemsworth’s arms and legs, we doubt the fitness fanatic has ever skipped a workout.

The actor has time and time again shown off his muscular legs, so we’re calling this one just a bad angle.

In fact, Chris’ body double Bobby Holland Hanton has been struggling to gain the same size as the actor.

“Dude, listen, everyone is like ‘wow look at the size of him’ and I’m like, yeah, that’s brilliant, I’m that guy’s double so I text him I’m like, ‘thanks very much dude you’ve just made this even harder’,” he told Nova’s Fitzy and Wippa in February.

“I train with him a lot, we train all the time, we’re on the same diet regimen and training. He’s the biggest he’s ever been so I have to be the biggest I’ve ever been which is a challenge but I’m up for it.”

He even explained the intense diet he has been following, which includes seven meals a day.

He explained: “Every two hours we are eating, it’s become a chore, I don’t enjoy eating at all, every two hours it’s like get calories in, training twice a day, it’s full on.”