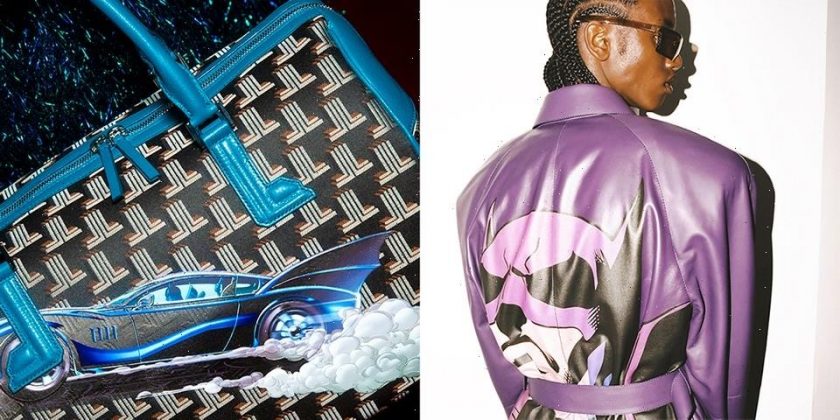 For Spring/Summer 2022, Bruno Sialelli invited DC Comics‘ Batman and Catwoman to interpret Lanvin, and as the world saw during the house’s runway show it proffered a collection dominated by graphic-adorned clothes, accessories, and shoes. Now, ahead of the collaboration’s global launch, Lanvin provides a closer look at what’s to come.

The collection is of course exciting for the brand, but something that’s sure to cause a storm is DC Comics’ take on Lanvin’s Curb Sneaker. Here, the retro skateboarding-inspired shoe has been given a reworking in the style of Batman, notably adding the superheroes face to the tongue (complete with pointed ears) and more themed artwork on the toe box. Shirts are split into two sides, with Batman’s face gracing the right, looking into the black side as if he was to tackle the night, while accessories such the bags are adorned with Batman’s face in a similar fashion to the sneakers, finished with pointed ears as a considered detailed.

Elsewhere, the Batmobile has been printed across leather cropped tops for women, and Catwoman has been artistically portrayed on sparkly silver slip dresses, small box bags, technical form-fitting dresses, denim shorts, and much more. For something less intricate, Lanvin also serves up Batman-branded garments wearing the signature logo.

The collection will be available online and in Lanvin stores from early March, ahead of the release of The Batman, releasing in theaters in North America from March 4, 2022, and internationally from March 2, 2022. Take a closer look at the collection above.

In other news, Aries has revealed its SS22 collection.
Source: Read Full Article