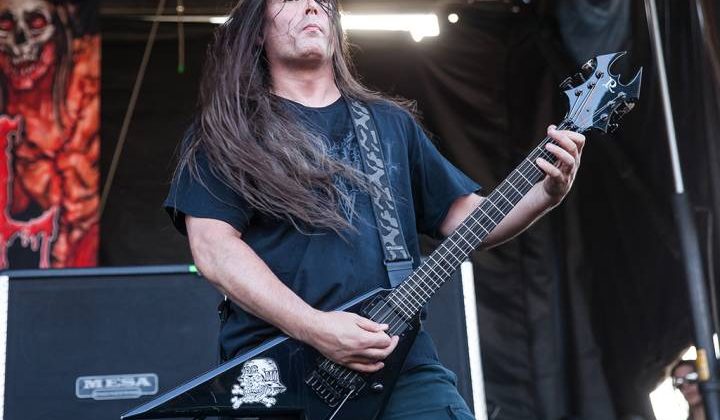 The 53-year-old allegedly broke into one of his neighbours’ homes in Northdale, Fla., on Dec. 10, warning them of “the rapture.” After ignoring multiple requests to leave the couple’s home, O’Brien allegedly pushed a woman down and fled into the backyard where he proceeded to hide behind a garden fence.

Authorities were called to the scene to assess the situation. Upon appearance, O’Brien charged at one of the officers with a knife before being repeatedly shocked with a taser gun. He was arrested and taken to the Hillsborough County Jail.

During the burglary, O’Brien’s nearby rental home reportedly went up in flames. It is unclear if this was related to the invasion, but according to the Tampa Bay Times, fire marshals discovered more than 80 firearms in his home, including two military-grade flamethrowers.

O’Brien faced multiple charges of aggravated assault and burglary. He was shockingly released on Dec. 14 after paying only a US$50,000 bond.

Pat O’Brien of Cannibal Corpse performs at the Mayhem Festival at the AT&T Center on Aug. 14, 2009 in San Antonio, Tex.

In an interview with ABC Action News, the unnamed victims believed he may have been under the influence of hallucinogenic drugs when he entered their home. The male victim further revealed that O’Brien claimed “someone was after him.”

Further investigation revealed that O’Brien had called his parents hours prior to the incident. As shown in the newly released records, he allegedly warned them of an incoming “alien invasion.”

Before given a bail amount, O’Brien was required to take a drug test on Dec. 11. The condition for the test was inexplicably removed the next day and the bond was set for $50,000.

The records detailed exactly what the guitarist was equipped with. As well as flamethrowers, the authorities seized around 20 handguns, 10 semi-automatic rifles and close to 50 shotguns — one of which had its barrel illegally sawed off according to Florida news network WFLA 8.

Many fans and speculators are under the impression that O’Brien’s large collection of artillery was a way for him to “prepare” for such an occasion.

Officials taking part in the investigation have not yet discovered the initial cause for the fire; however, O’Brien’s stash of ammunition is believed to be the root.

Fire marshals discovered the ammunition was exploding in the process of putting the fire out. As a result, half of the Windflower Circle residents were forced to evacuate their homes for safety.

O’Brien has not yet commented on the matter.

Unfortunate timing as Cannibal Corpse was announced to play 16 gigs with Slayer next summer only one day before the incident.

The tour will be Slayer’s last and will welcome the heavy metal icons back to Canada for a single show in Ottawa.

There have been no comments regarding the future of the band. It has been speculated that Cannibal Corpse will find a replacement guitarist.