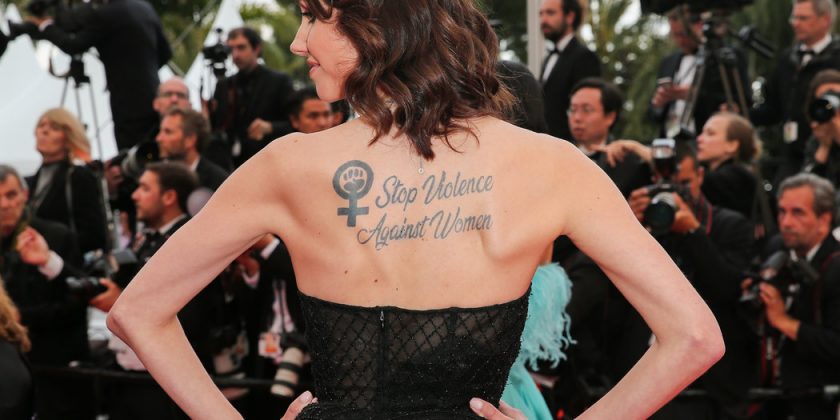 “There is one thing in the world that I’m truly proud of, the only thing: It’s my career, and this Palme d’Or has been offered to me for my career and nothing else,” said Delon, who, starting in the 1960s, worked with some of Europe’s most prominent movie directors, including Luchino Visconti and Michelangelo Antonioni. Delon held up the award and the crowd rose to its feet in a standing ovation.

But unlike the other honorary awards the festival has granted over the years, a cloud hung over this one. On April 19, soon after the move was announced, the Women and Hollywood advocacy website condemned it, saying Delon had “publicly admitted to slapping women.”

In a separate online campaign, more than 26,000 people petitioned to stop Delon from collecting the prize. And at the ceremony, Sand Van Roy — an actress whose rape suit against the filmmaker Luc Besson was dropped for lack of evidence — walked up the red carpet in a flowing gown and the words “Stop Violence Against Women” tattooed across her back.

Delon declined to comment through the festival’s organizers, who were handling his media requests. But Thierry Frémaux, the festival’s artistic director, was defiant onstage as he presented the award.

“Alain Delon is not afraid to displease, he’s not afraid to be wrong, and he doesn’t really think like other people,” Frémaux said. At a time when “ignorant” individuals are able to “attract attention by telling lies,” he added, the festival “will always be on the side of the artists.” 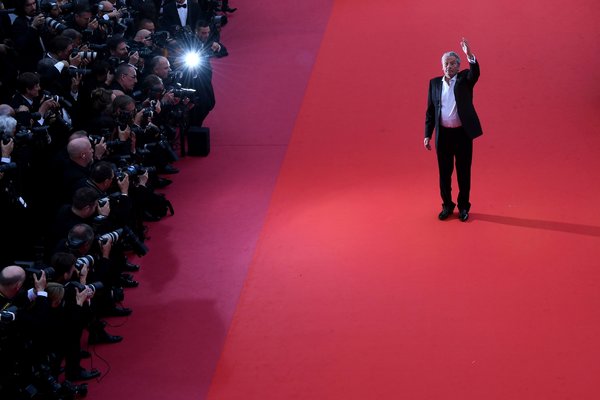 The Cannes Festival — the longtime stomping ground of the film mogul Harvey Weinstein — continues to feel the ripple effects of the #MeToo movement. The annual event is once again being called out for its track record in admitting and rewarding female filmmakers, and on its general attitude toward women. Only one woman has ever received the top trophy, the Palme d’Or, and critics say too few movies directed by women are included in the main competition. Of the 21 films competing this year, four are directed by women — one more than in 2018.

In 2018, 82 prominent women in film swarmed the Cannes red carpet to demand better representation. The festival’s bosses signed a charter pledging equality and vowing to compile and release gender-specific data, and they have set up a sexual harassment hotline and added child care facilities during the 12-day event. But many say that a lot more needs to be done.

“This festival has had a really abysmal record of being inclusive for women directors, and the people in leadership have taken a long time to even begin to understand how they can be a part of the change,” said Melissa Silverstein, the founder and publisher of Women and Hollywood, which issued the statement against Delon. Giving the French actor the award “feels like they just stopped in their tracks,” she said.

Delon made the remarks denounced by Women and Hollywood in November 2018. Asked in an interview on French television whether he was macho, the actor said: “I don’t know what you call macho. Is a slap in the face macho? Yes, I must have been macho.” He added that he had “received a lot of slaps, even from women.”

In an interview published on Sunday with the French weekly Journal du Dimanche, Delon confirmed that he had slapped a woman, saying: “I should have added that I received more slaps than I gave. In all my life, I never harassed a woman.”

In an interview on Monday, Van Roy said she got the temporary tattoo on her back — featuring a clenched fist and the Venus symbol representing womankind — done in Paris two days before the ceremony.

Delon was “admitting he’s violent against women, and he doesn’t realize it’s a problem, which is even worse,” she said. In France, “people tend to forgive” actors or directors who do great work, she added.

Van Roy said Delon should “take responsibility for his actions, because he’s an example to a lot of people.”

A day before the Delon ceremony, the festival set out to burnish its image by releasing data showing that it had at least as many women as men on its selection committees, juries and staff. Frémaux shared the figures at a news conference of the 50/50 by 2020 Collective, an advocacy group that organized the women’s red carpet rally last year.

Frémaux noted that 26 percent of the full-length films submitted for this year’s festival were made by women. In the short film section, the figure rose to 32 percent, and it was 44 percent in the category for student films.

Julie Billy, a co-president of the 50/50 by 2020 Collective, called the figures “encouraging.”

“A new generation of women directors is emerging, and being selected by the festival, with films that are very well received,” she said.

The festival also provided child care spaces for attendees for the first time. The main festival building was equipped with a changing room. Right outside it, across from the Kazakhstan pavilion, was Le Ballon Rouge, a pop-up day care center set up to look after 11 children at any given time (a tiny number given the thousands of accreditations).

Inside, a small team of minders watched the children, whose ages ranged from 18 months to 6 years, as they napped and played games.

“What’s crazy is that this is the first time that the service is being offered at a Cannes festival: It never existed before,” said Nihel Bemrah, who oversaw the child care facility. She said the initiative had received the full backing of the festival, and that she expected much larger facilities in the future.

On Saturday, at a villa in the hills overlooking Cannes, Women in Film and Television International hosted a cocktail party with Time’s Up, an organization that advocates equality in the workplace.

Dozens of guests mingled outside despite the rain, then gathered around Helene Granqvist, the president of the women in film group. She announced that a half-dozen companies had joined an initiative to offer a 10 percent discount on postproduction services and equipment to gender-balanced productions. Among them was Studio Babelsberg in Germany, Europe’s largest film studio.

Granqvist noted that 2020 — the target year set by advocacy groups for parity in the film industry — was about six months away. “The clock is ticking,” she said. “We all need to roll up our sleeves and get it done.”

Wrapping up the evening’s speeches, Heather Rabbatts, the chairwoman of Time’s Up U.K., said that everyone in the movie industry had to contribute.

“If you are a producer, you hire women in all your departments. If you’re a director, you have women across as many roles as you can get them,” she said.

That way, she added, “we will change the paradigm.”