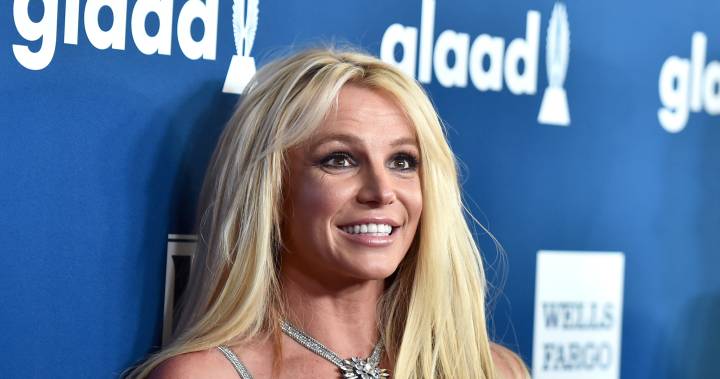 Britney Spears accused the media of photoshopping pictures of her in a bikini.

In a video posted to Instagram on Monday, the Toxic singer wore a crop top and jeans and asked fans if she looked “any different today.”

“Good morning, so this is the day after me on my boat ride. Do I look any different today then yesterday?” she asked.

People always say people or celebrities cheat with their images, but never do they question the papparazzi for selling your pic that they have messed with !!!! This was all done within the same 17 hours !!!!

Spears was referring to the recent paparazzi photos of her that showed her and her boyfriend Sam Asghari jetskiing in Miami.

The mother of two said she looks nearly “40 pounds bigger than I am today” in the tabloid photos.

“People always say people or celebrities cheat with their images but never do they question the paparazzi for selling your pic that they have messed with!” Spears captioned the video, adding a comparison of herself and one of the tabloid picture. “This was all done within the same 17 hours!”

On Sunday Spears posted a series of videos to Instagram, claiming that some of her followers say her photos and videos “are either not on time or they’re fake.”

“But my question to all of you is, a lot of fans in our world today, they always are subject to really criticize people and say that the pictures and videos that they’re posting are either not on time or they’re fake. But no one ever really asks are the paparazzi pictures fake? And do the paparazzi people do stuff to the pictures, and is the news really real?” she continued. “It’s a conspiracy theory that I’m actually interested in.”

“Yesterday, I went swimming,” she continued in the Instagram video. “I look like I’m 40 pounds bigger than I am today. This is how I am right now. And I’m skinny as a needle. You tell me. What is real?”

This comes after the news that Spears’ restraining order against her former manager Sam Lutfi will stay in place until June 13, while a hearing will resume on whether it can be extended for several years.

The restraining order alleges that Lutfi harassed and disparaged Spears and her family via social media and text messages. Lutfi has been critical on social media of a conservatorship that has left the singer under the control of the court and her father, adding his voice to a chorus of fans who want her “freed” from the arrangement.

The restraining order issued May 8 demands that Lutfi stay at least 183 metres from Spears, her parents, and her two sons and to refrain from contacting or disparaging them.

Lutfi and his lawyer argued in documents opposing the order that it is “an unconstitutional prior restraint on speech” to prohibit him from making disparaging comments about the singer or her family.

The papers also say that Lufti, 44, has not contacted Spears in 10 years and that her lawyers had not shown that he caused her harm.

“There has been no psychological or other evidence offered by Ms. Spears that she has actually suffered any distress,” the documents said.

Lutfi acknowledged that he had sent several text messages to Spears’ mother, Lynne, and called her once.

—With files from the Associated Press