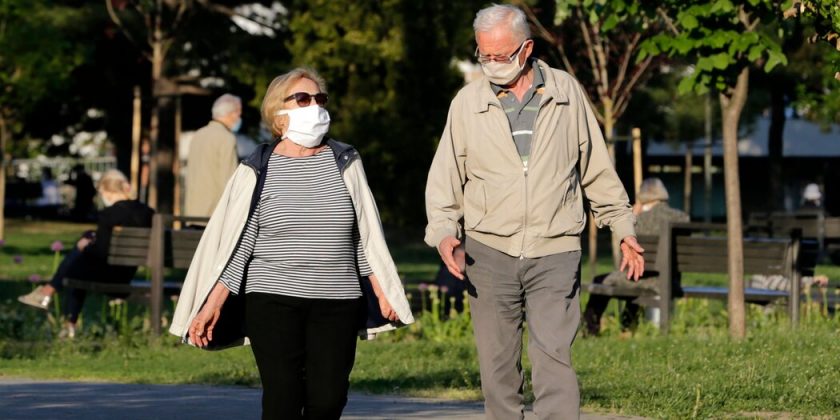 Brisk walking improves brain health and thinking in aging people with memory impairments, according to a new, yearlong study of mild cognitive impairment and exercise. In the study, middle-aged and older people with early signs of memory loss raised their cognitive scores after they started walking frequently. Regular exercise also amplified the healthy flow of blood to their brains. The changes in their brains and minds were subtle but consequential, the study concludes, and could have implications not just for those with serious memory problems, but for any of us whose memories are starting to fade with age.

Most of us, as we get older, will find that our ability to remember and think dulls a bit. This is considered normal, if annoying. But if the memory loss intensifies, it may become mild cognitive impairment, a medical condition in which the loss of thinking skills grows obvious enough that it becomes worrisome to you and others around you. Mild cognitive impairment is not dementia, but people with the condition are at heightened risk of developing Alzheimer’s disease later.

Scientists have not yet pinpointed the underlying causes of mild cognitive impairment, but there is some evidence that changes in blood flow to the brain can contribute. Blood carries oxygen and nutrients to brain cells and if that stream sputters, so can the vitality of neurons.

Unfortunately, many people experience declines in the flow of blood to their brains with age, when their arteries stiffen and hearts weaken.

But the good news is that exercise can increase brain blood flow, even when exercisers are not moving. In a 2013 neurological study, the brains of physically active older men showed much better blood saturation than those of sedentary men, even when everyone was quietly resting. The greater brain blood flow in people who exercise also is associated with better scores on tests of memory and thinking than among sedentary people.

But these studies generally focused on people whose brains and cognition were relatively normal. Exercise bulked up, for them, what already was reasonably sound. Far less is known about whether physical activity similarly benefits the blood flow, brains and thinking of people who are starting to experience more serious memory loss.

So, for the new study, which was published this month in the Journal of Alzheimer’s Disease, researchers at the University of Texas Southwestern Medical Center in Dallas and other institutions asked a group of 70 sedentary men and women, aged 55 or older and diagnosed with mild cognitive impairment, to start moving more.

They first brought everyone into the lab and tested their current health, cognitive function and aerobic fitness. Then, using advanced ultrasounds and other techniques, they measured the stiffness of their carotid artery, which carries blood to the brain, and the amount of blood flowing to and through their brains.

Finally, they divided the volunteers into two groups. One began a program of light stretching and toning exercises, to serve as an active control group. The others started to exercise aerobically, mostly by walking on treadmills at the lab, and then, after a few weeks, outside on their own. The exercisers were asked to keep their exertions brisk, so that their heart rates and breathing rose noticeably. (They could swim, ride bikes or do ballroom dancing if they chose, but almost everyone walked.) The control group kept their heart rates low.

Everyone in both groups worked out three times a week at first, for about half an hour and under supervision. They then added sessions on their own, until after six months, they were completing about five workouts most weeks. This program continued for a year, in total. About 20 volunteers dropped out over that time, mostly from the walking group.

Then the volunteers returned to the lab for a repeat of the original tests, and the researchers compared results. To no one’s surprise, the exercise group was more fit, with higher aerobic capacity, while the stretchers’ endurance had not budged. The aerobic exercise group also showed much less stiffness in their carotid arteries and, in consequence, greater blood flow to and throughout their brains.

Perhaps most important, they also performed better now than the stretch-and-tone group on some of the tests of executive function, which are thinking skills involved in planning and decision-making. These tend to be among the abilities that decline earliest in dementia.

Interestingly, though, both groups had raised their scores slightly on most tests of memory and thinking, and to about the same extent. In effect, getting up and moving in any way — and perhaps also interacting socially with people at the lab — appeared to have burnished thinking skills and helped to stave off accelerating declines.

Still, the researchers believe that over a longer period of time, brisk walking would result in greater cognitive gains and less memory decline than gentle stretching, says Rong Zhang, a neurology professor at UT Southwestern Medical Center, who oversaw the new study.

“It probably takes more time” than a year for the improved brain blood flow to translate into improved cognition, he says. He and other researchers are planning larger, longer-lasting studies to test that idea, he says. They hope, too, to investigate how more — or fewer — sessions of exercise each week might aid the brain, and whether there might be ways to motivate more of the volunteers to stick with an exercise program.

For now, though, he believes the group’s findings serve as a useful reminder that moving changes minds. “Park farther away” when you shop or commute, he says. “Take the stairs,” and try to get your heart rate up when you exercise. Doing so, he says, may help to protect your lifelong ability to remember and think.