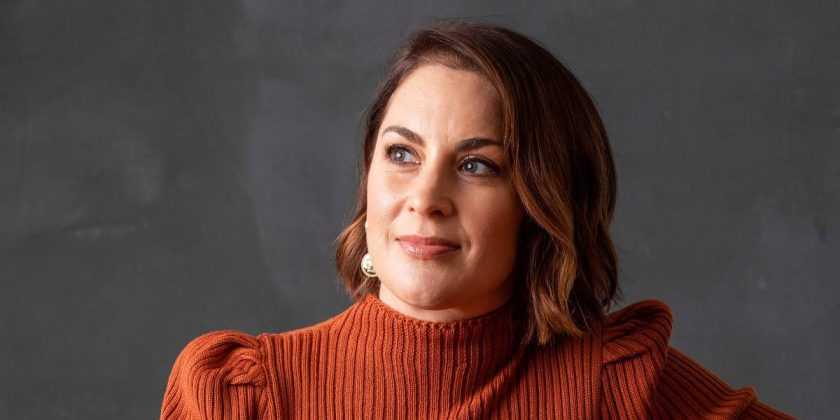 Cool and calm, Melissa Stokes is often the face presenting the news to hundreds of thousands of people across New Zealand. But over the past year, when the cameras stopped rolling, the TVNZ star has faced some of the biggest hurdles in her life – including battling anxiety, helping her eldest son with his ADHD and being there for her mother who has lung cancer.

“When Covid first hit in 2020, I’d only been the weekend newsreader for a year before I had to move to the Breakfast show, as we broke into teams,” recalls Melissa, who turns 43 next month.

“I don’t think I handle change very well, so that made me quite panicked because nobody knew how long that was going to go for. We’re used to people popping in and out of the studio, but there were no guests coming in and it was just Pippa Wetzell, John Campbell and me sitting there for three hours in what felt like quite a vacuum.

“Particularly on Breakfast, however, I knew we were company for people. And 10 years ago, you wouldn’t have heard newsreaders telling people to ‘Take care’ or ‘Be kind’. Yet that’s part of our vernacular now.”

Touchingly honest, Melissa isn’t the type to shy away from things, including the topic of mental health. A self-confessed worrier, she realised she needed help with her anxiety during that first lockdown.

“I wouldn’t say I was particularly bad. I was just sick of my brain giving me these worries all the time and needed a break from it.”

Her doctor prescribed anti-anxiety medication for a short time, which she says “definitely helped” to take the edge off.

“Now I can manage my anxiety with exercise. I walk a lot with a really solid group of girlfriends and we talk things out.”

As mum of two energetic boys, Hugo, 9, and Freddie, 7, Melissa admits that appearing live in front of an audience of over half a million people is much easier than some of the parenting challenges that come along.

She arrives at the Weekly photo shoot fresh from coaching Freddie’s basketball team before school. “Yeah, seven seven-year-old boys who don’t listen to me,” she says with a grin.

“And I haven’t played basketball since I was a child myself, but you’ve got to throw yourself in there, don’t you, when they need a coach? I actually get hoarse after every game. I try not to yell in my enthusiasm, but I can’t help it!”

Older son Hugo is also sports-mad. He loves football and tennis, and is part of a swimming squad. Three years ago, he was diagnosed with Attention Deficit Hyperactivity Disorder (ADHD), which was somewhat of a relief to Melissa and her husband, cameraman Dave Peirce, 45.

“It was really, really tough when we knew there was something going on, but we couldn’t work it out,” she explains. “Hugo just couldn’t focus on anything – forever asking, ‘What’s this? What’s that? Why has that moved?’ So he couldn’t sit and look at his book or write a page because he’d be so busy looking at everything else.

“We feel so fortunate we could get him really good help. We went to a counsellor for a little bit and waited a long time to see a paediatrician. She sent us to an occupational therapist, who’s amazing.

“And since then, he really loves life, loves the school routine and is mad keen on being a YouTuber (check out his channel Minecraft Roblox by kids for kids!).

“We’ve just accepted he’s a child who needs some extra support to learn some new tools to deal with things. Not every kid skips through life, do they?”

Hugo’s journey has taught Melissa that ADHD is different from child to child, so she’s found comparisons aren’t helpful. She prefers to share knowledge of a range of treatment options to other parents going through the same thing.

“I often feel … not judged,” she pauses to reflect, “but that some people might be like, ‘What are you doing?’ I’ve learned you’ve got to do what you feel in your gut is right for your kids and advocate for them.”

This year marks two decades working at TVNZ, where Melissa began her career as a reporter in its Christchurch newsroom before scoring her dream job of Europe correspondent in 2006.

Based in London, one of her most eye-opening assignments was covering the conflict in the Middle East, where she spent a nerve-racking night with Dave (before they were dating) trapped in Gaza.

“It’s interesting seeing things there kick off again because we were probably only two of the few people from TVNZ who have actually been into Gaza.

“Dave and I went in to do a story and something happened, so Israel shut down the border, which meant we had to stay the night there. I’ll always remember we were in this hotel, but we stayed awake all night as the building shook constantly from the bombing.”

However, it was the next day when things got more frightening.

“Somebody important must have been killed and there was a very big rally,” recalls Melissa.

“Because I was a Westerner, a whole lot of men went for me in the car. If it hadn’t been for the local producer, who slammed my door shut and quickly got us out of there, I don’t know what would’ve happened.

“That was exciting work, being the war correspondent, but for me, it’s not the story but the people you meet along the way. Such as when I visited Gallipoli for Anzac Day and met a 100-year-old woman who was the only surviving member of her village, who remembered the war.”

It’s been in the past few years that Tauranga-born Melissa has found herself more connected to New Zealand, through learning te reo Māori, taught by TVNZ presenter Scotty Morrison and his broadcaster wife Stacey.

“A group of us meet every Monday and I love it!” she enthuses. “I’m in no way at all fluent, but I feel the more I learn about tikanga [customs], the more I understand about our country.”

In 2019, Melissa stayed on a marae in Rotorua for five days doing a full immersion.

“I’m not very good in big social situations. So going to an immersion is like trying to make small talk – which I’m not very good at – in a different language. I’ve never
felt so out of my comfort zone!”

Her passion for learning something new has also been a welcome distraction while supporting her seamstress mother Gill, 69, who was diagnosed with lung cancer five years ago. Although the prognosis wasn’t good and the family felt “quite lost” at the time, amazingly, Gill’s health is great and she still has the energy to babysit her grandkids and go for a walk.

“I’m not sure we would’ve thought she’d still be here today,” shares Melissa.

“Mum’s under great care from her oncologist and also fortunate that we bring in a targeted chemo drug from India for her because it was too expensive to buy monthly from Pharmac.

“Without that drug, her quality of life would be much different.”
Melissa adds, “There’s definite ‘scan-xiety’ within the whole family coming up to a scan, which she has every few months, and I go to those with her.”

“My Nana Peg was half-Chinese and hid it from my mum because when she was growing up, it was seen as a bad thing. My mum only found out about her heritage when a Chinese girl came up to her at school and said, ‘You’re my cousin!’ Nana Peg later confirmed that it was true.

“For me, learning this as a child was exciting and now for my kids, too. When Hugo gets a cut, he asks, ‘Is that my Chinese blood coming out?’ It’s that thing that makes you a little bit different, isn’t it, and we’re happy to embrace our differences.”

What was your first job?

Working in the deli section at New World Tauranga. Then in my later teens, I worked for my parents in their fabric store and was terrible at it. In fact, Dad says he fired me but I always tell him I quit!

Who inspired you to be a journalist?

My uncle is Spencer Jolly, who was a political reporter at TVNZ for a time. And he didn’t get on with Muldoon apparently, so he moved to Australia, where he was political editor at Channel 9 for years. When I would go over there, he would take me into the studio.

Delhi Commonwealth Games in 2010 were completely chaotic. And compared to the Beijing Olympics, where you had to follow every rule and everything was very strict, in India, everything was left so wide open that I found myself not only on the 100m track, but also on the dais pretending to get a medal.