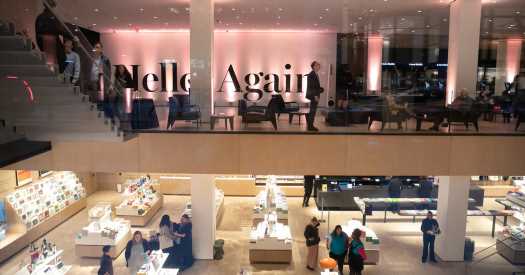 We’ve been asked many questions about how to visit the newly-expanded Museum of Modern Art. Based on roughly a dozen visits, I’ve figured out some of the answers.

All right, the new MoMA is here. When can I get in?

How do I get there?

The main entrance is on West 53rd Street between Fifth and Sixth Avenues, now tricked out with a sharp new canopy. You can also enter on West 54th Street.

How much does a visit cost, and when is it free?

Tickets are still $25. Those 65 and older pay $18, students pay $14, and children under 16 are free. Admission is free for everyone on Fridays starting at 4 p.m., but don’t show up right at 4 unless you like waiting in line.

Buy your ticket at the new kiosks in the museum’s expanded lobby, or at moma.org. Your ticket also covers admission to all movies screening at MoMA that day, and to PS1, MoMA’s sister institution in Long Island City, Queens.

You can always see everything on the ground floor without buying a ticket. That includes — if you head east — the MoMA sculpture garden, still home to Aristide Maillol’s torqued sculpture of a tumbling nude, and an entire Paris subway entrance. If you head west you’ll be able to access two free galleries in the new extension: a design exhibition and a painting show by the Kenyan-British artist Michael Armitage (on view through Jan. 20).

How much time should I expect to spend at the museum?

The new MoMA is definitely larger, with 30 percent more gallery space. If you want to see everything, budget a solid four or five hours — and you’ll still be moving fast past many works. (I’m assuming you don’t want to watch all five-plus hours of “Sleep,” part of MoMA’s significant restoration and digitization of Andy Warhol’s movies.)

Unlike at the Metropolitan Museum of Art, where tickets are valid for three straight days, MoMA still sells only a one-day ticket. The museum ought to consider a multiday offer, especially if it’s encouraging visits to both the larger museum and PS1, too. Until then, if you plan to visit several times in the next year, it’s cost-effective to buy an $85 individual membership. Members get in free and can visit for a half-hour before the general public each morning.

You should plan to visit more than once anyway. MoMA’s curators will be regularly rotating the collection displays; come April, all 20 of the westernmost galleries will be rehung.

I’m still in the lobby, and I’m confused. Which way do I start?

I’d suggest starting on the east side of the museum. (Look for the suspended helicopter.) Take the escalators or elevators to the fifth floor, where the chronological display of the collection (1880-1940) begins. You’ll see Cézanne and van Gogh with new company, and then discover “Lime Kiln Club Field Day” (1914), the first feature-length film (according to MoMA) with an African-American cast.

The galleries are numbered, so you can work counterclockwise, moving from the older building into the new wing and back. If you’re enjoying the chronological approach, you can do it again on the fourth floor (for postwar art, 1945-75 or so) and the second floor (for contemporary art, from the late 1970s to the present).

But if you’re more adventurous, head west from the ticket desk, hit the design gallery and Projects gallery, then hop on the new “blade” staircase by Diller Scofidio + Renfro/Gensler. This way will plunge you into the middle of the timeline; ascend to the fifth floor for Amy Sillman’s exquisite Artist’s Choice show, “The Shape of Shape” (through April 20), and to the sixth for the new terrace.

Tell me the three collection galleries I absolutely cannot miss.

In Gallery 406B you’ll find Henri Matisse’s pulse-quickening “Swimming Pool,” whose fragile blue cut-outs can only be shown rarely.

And in Gallery 206 you’ll find work by women from India and Romania to Colombia and South Africa, a reflection of the museum’s deepening global engagement.

Some galleries have funny names. What kind of a title is “Stamp, Scavenge, Crush”?

Many rooms in the new collection display still orbit around art movements — Dada, Surrealism, Abstract Expressionism, Pop. But the wall texts encourage conversations and cross-fertilization. (This gallery includes Robert Rauschenberg’s “Canyon,” a painting with a taxidermied bald eagle affixed to the surface, but also less famous artists who incorporate repurposed materials into their works.)

Some galleries have precise focuses, whether on early Russian book design (Gallery 507) or on ’80s downtown New York (Gallery 202). Others are broader and more thematic, like Gallery 414, “City as Stage,” which unites graffiti tags by Rammellzee with Trisha Brown’s gravity-defying “Man Walking Down the Side of a Building.”

I can’t find the photography galleries…

Many photographs are included within the general flow of the collection display, offering you the serendipity of coming upon something you wouldn’t have sought out, while others appear in spaces for photography alone.

Currently those are Galleries 502, 510, 520 for prewar (don’t miss the vernacular photo-booth portraits in the last of those), and Galleries 409 and 419 for postwar (the first of which features abstract imagery by Harry Callaghan, Rauschenberg and several Japanese photographers).

What about architecture and design?

Visit Galleries 216 (social housing and its discontents), 511 (skyscrapers), 519 (architecture of modern museums) and 417 (modular construction, including a glass wall of the United Nations building and a clip of Jacques Tati in a maze of modern architecture from his 1967 film, “Playtime”). And the show “Taking a Thread for a Walk,” on the third floor, presents textiles and other fabric works.

I’m in a dark room with stuff hanging in midair. It sounds like I’m in the Amazon.

That’s “Rainforest V (Variation 1),” the sonic sculpture by David Tudor that is the first presentation in MoMA’s new Studio on the fourth floor, a dedicated space for media and performance. “Rainforest V” is only here until Jan. 5.

Some people are dragging giant jingle bells around the floor.

You must be in the atrium, where the South Korean artist Haegue Yang is presenting “Handles,” six monumental sculptures on wheels that are skinned with silver and bronze bells. Every day at 4 p.m. , performers activate Ms. Yang’s work by rolling the sculptures, which produces an eerie, ritualistic rattle.

My brother-in-law asked me to buy him a van Gogh umbrella.

The new Museum Store occupies an enlarged concession below the lobby. It’s the hub for all art books from MoMA’s own imprint and from other publishers, as well as toys, umbrellas, calendars and cards. You’ll also find umbrellas on 2 and across the street in the MoMA Design Store.

I need a coffee. Or maybe a drink, and definitely a cell recharge.

On the sixth floor is MoMA’s new Terrace Café, with flashy Grand Antique marble and art by Kerstin Brätsch. On the second floor, the Italianate Café 2 has been spiffed up, and there’s also a coffee cart that makes espresso and sells pastries. It’s next to the phone recharging bank.

Downstairs, as before, is the museum’s fancier restaurant, The Modern, where a six-course meal in the main dining room will run you $188 (service included). The livelier Bar Room has a less expensive à la carte menu (roasted mushrooms with polenta is $24, and excellent).

Jason Farago is an art critic for The Times. He reviews exhibitions in New York and abroad, with a focus on global approaches to art history. Previously he edited Even, an art magazine he co-founded. In 2017 he was awarded the inaugural Rabkin Prize for art criticism. @jsf