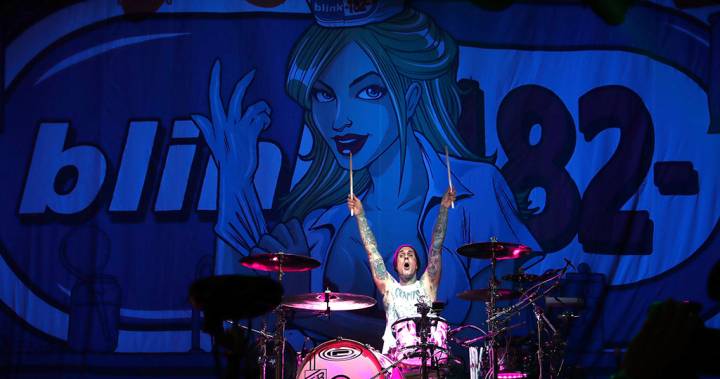 Blame It on My Youth — the supposed lead single from the band’s upcoming eighth album — dropped on Wednesday afternoon.

The band teased the release of the single on Tuesday morning.

“Tomorrow,” they wrote on Instagram with the single’s cover, which features the iconic Blink-182 logo.

Blame It on My Youth is now available on all major streaming platforms.

The release of Blame It on My Youth coincides with the band’s recent announcement that they’ll embark on a 40-date tour across North America with Welsh pop-punk band Neck Deep and Lil Wayne.

The Miss You stars are currently scheduled for one Canadian appearance this summer at Toronto’s Budweiser Stage on July 7.

“There will be Canadian dates on the tour,” he responded when asked if Blink-182 would be playing Vancouver. “I don’t know if Vancouver is one of them, I’d have to check.”

In addition to joining their tour, Lil Wayne recently collaborated with Blink-182.

The Uproar rapper dropped a live mash-up performance of his A Milli hit and Blink-182’s What’s My Age Again? on Monday morning. It was met with mixed reviews.

(L-R) Travis Barker, Mark Hoppus and Matt Skiba of Blink-182 perform as the band kicks off its 16-show ‘Kings of the Weekend’ residency at The Pearl concert theatre at Palms Casino Resort on May 26, 2018 in Las Vegas, Nev.

An exclusive presale for American Express cardholders is now open.

Tickets and additional information can be found on the official Blink-182 website.