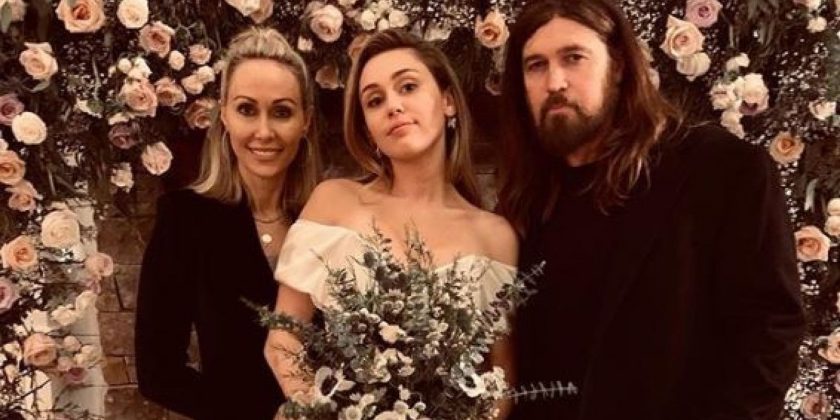 The country music singer, 57, shared intimate snaps of the bride and groom cutting into their wedding cake after tying the knot surrounded by family and friends on 23 December.

“Wedding wouldn’t be complete without one shot from Dads out dated blackberry camera. Love seeing all so happy,” the Achy Breaky Heart singer wrote.

He also congratulated the couple, who have been dating on and off since 2009, in a candid shot of them embracing.

One image of the Malibu singer, 26, standing in between her parents was captioned, “This makes my heart so happy,” while another of just her and her father was posted with a love heart emoji.

Cyrus, who became a teen idol after she starred as the character Miley Stewart on Disney Channel’s Hannah Montana television series, confirmed her marriage to actor Hemsworth, 28, on Thursday with a kissing shot.

She also shared a video of her Nothing Breaks Like A Heart collaborator Mark Ronson whistling Here Comes The Bride.

The Wrecking Ball singer later posted a clip on Twitter of herself dancing to Ronson’s hit Uptown Funk after the small ceremony in Tennessee.

An image she posted on Instagram carried the caption “12.23.18”, which is reported to be the date of the wedding.

Two other photos from the day were captioned: “This is probably our one – millionth kiss” and “10 years later” in a likely reference to the film The Last Song.

Some details of their wedding appeared online last week, including photos of Hemsworth’s brothers Chris and Luke at the wedding and the married couple cutting the cake.