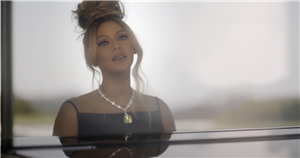 Beyoncé may have confirmed that new music is on the way, but she’s yet to indicate when. Luckily, there is a new tune to tide fans over. As part of her “About Love” campaign with Tiffany & Co., also starring JAY-Z, the icon debuted a beautiful cover of “Moon River.” It’s fitting, since the song was first performed by Audrey Hepburn in Breakfast at Tiffany’s, and Hepburn once also wore the staggering 128.54 carat yellow diamond Beyoncé now models in the campaign.

As part of the new partnership, Beyoncé and JAY-Z established a scholarship fund benefiting students of five historically Black colleges and universities. The news comes after the power couple faced criticism for appearing in the campaign which, for many, promoted the oppressive colonial histories of diamond mining. As of right now, a total of $2 million has been pledged towards the scholarship program.