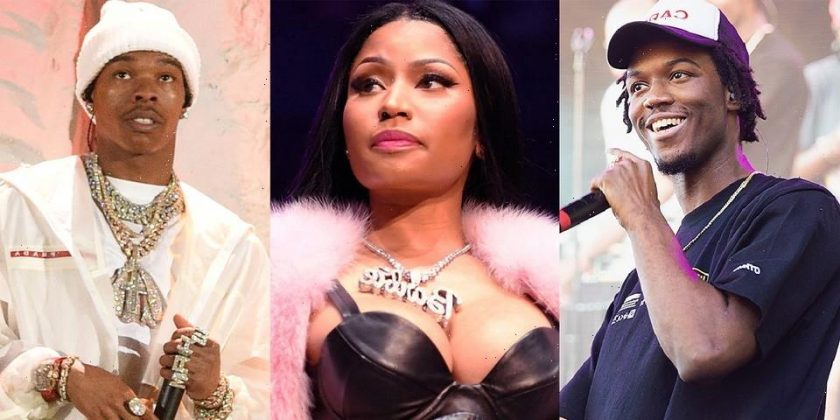 This week’s list is led by releases from Saba and Nicki Minaj x Lil Baby who dropped the new album Few Good Things and the single “Do We Have A Problem?” respectively. Also joining this selection are offerings from Nardo Wick, BEAM, Obongjayar, Mitski and 2 Chainz, along with collaborations from Griselda titans Conway The Machine, Benny The Butcher and Westside Gunn, Queen Naija and Big Sean and $NOT and A$AP Rocky.

Nicki Minaj x Lil Baby – “Do We Have A Problem?”

Nicki Minaj enlisted Lil Baby for her first release of the year, “Do We Have A Problem?” The single marks the pair’s second collaboration following “Bussin,” which the Young Money rapper stated “didn’t feel like it really matched with him.” She told Zane Lowe on Apple Music 1 that the beat of of “Do We Have A Problem?” had more of Lil Baby’s “vibe” on it, so she opted to drop two collabs with him. “I normally don’t do those things with anybody outside of the Young Money fam right? I mean, it’s not a lot of rappers that I have a lot of different records with,” she said. “So yeah, with Lil Baby, it was surprising for me too. I didn’t think they would even want to put out both songs. It was like, I’m thinking he was just going to be like, I like this one, so let’s scrap the other one. But they was like, let’s go with both.”

After four long years, Saba is officially back with his new album Few Good Things. His first full-length effort since CARE FOR ME features Pivot Gang, Black Thought, Krayzie Bone, 6LACK, Smino, Mereba, Fousheé, Benjamin Earl Turner, G Herbo, Krayzie Bone and more, and its concept “is the realization of self after a search for exterior fulfillment.” He added, “It is the satisfaction and completeness you gain by simply living a life that is yours. Few is a small number, but few is not lonely. In the face of all adversity, a few good things is recognizing and accepting blessings. Few is to count them, one by one – an empty glass is full of air, an empty bank is full of lessons., and an empty heart is full of memories. Few good things is to grow comfortable with the empty, and despite that, finding your fullness.”

Nardo Wick has shared an accompanying music video for “Me or Sum,” the Future and Lil Baby-assisted cut from Who Is Nardo Wick? The breakout Jacksonville rapper’s debut studio album dropped in December 2021 and entered the top 20 of the Billboard 200 chart, making it the fifth-largest debut of the year.

Griselda titans Conway The Machine, Benny The Butcher and Westside Gunn are back together for “John Woo Flick,” the latest single off Conway The Machine’s God Don’t Make Mistakes. He also officially revealed a February 25 release date for his Shady Record debut, “Announcing the release date of God Don’t Make Mistakes with my new single “John Woo Flick,” its perfect timing. He added, “Finally, my fans get to hear the music I put my heart and soul into.”

After more than half a year of teasing, $NOT and A$AP Rocky’s collaborative effort “Doja” is finally here. The track is set to appear on the former’s third and upcoming studio album Ethereal, which will also feature Teddi Jones, Trippie Redd, Lil Yachty, Kevin Abstract, Juicy J and Joey Bada$$.

Mitski is finally back from her lengthy hiatus with Laurel Hell, her first record since 2018’s widely successful effort Be the Cowboy. Despite being away for long, the artist told Rolling Stone that the break was good for her, “I had physically neglected my health because I was on tour so much. I didn’t have health insurance. Basically during all of my twenties, I had no time or space to figure out who I am. I needed to actually figure out how to take care of my body.”

GRAMMY winner BEAM has officially dropped off his full-length debut album, ALIEN. The 19-track record features collaborations with Justin Bieber, Zacari, Papa San, Jorja Smith, Vory, Valee and Landstrip Chip, and hears BEAM explore themes of alienation, redemption and perseverance. “I just want people to realize they are not the only ones who feel alienated in life,” BEAM said in a statement. “Whether that’s a good or bad thing, you have to walk a narrow road. You feel alienated because you discern a certain thing that people don’t understand. You get to digest a piece of my brain and get to know me on an artistic level with this album.”

Detroit natives Queen Naija and Big Sean have teamed up for a brand new single, “Hate Our Love.” The romantic cut samples the classic ’70s hit “Sounds Like A Love Song” and is a celebration of love that perseveres. “What I’d like for people to take away from ‘Hate Our Love’ is don’t let anybody come in between anything or anyone that you love,” Queen Naija said in a statement. “I’m so excited to finally collaborate with Big Sean on a record…it’s been a dream of mine for a while now. With both of us being from Detroit, it felt like the perfect match up and I hope everyone loves the song!”