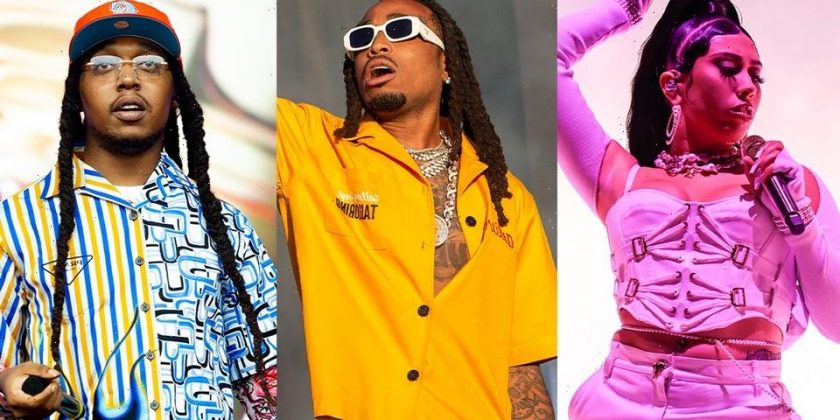 GRAMMY winner Kali Uchis joins Sprite Limelight with her new official music film “La Unica.” The hyper creative Latin crossover artist joins the global music program following Omah Lay’s “Take it On” and Coi Leray’s “The One,” and serves as the latest musician to connect music lovers from different cultures and influences with a new method of collaborative music that celebrates the unique creativity of the individual. GRAMMY-winning producer and artist James Blake created the central for each artist, allowing them to create their original tracks.

Takeoff and Quavo deliver their first collaborative album as a duo, Only Built For Infinity Links. The 18-track project features guest appearances from Mustard on “See Bout It,” YoungBoy Never Broke Again on “To The Bone,” Young Thug and Gunna on “Chocolate,” Summer Walker on “Mixy,” Birdman on “Big Stunna” and Gucci Mane on “Us vs. Them” along with production from the likes of Murda Beatz, DJ Durel, Money Musik, Budda Beats and more.

Joyce Wrice follows up her debut studio album Overgrown with the five-track EP Motive, where she teams up with frequent collaborator KAYTRANADA for three tracks along with producers like Kaelin Ellis, Osinachi Nwaneri and rising R&B artist Mack Kaene contributing. “In between coming off of my debut album and brainstorming ideas for my sophomore album, I was motivated to create an EP that the world could dance to,” she shared in a statement. “This new project is experimental, fun, carefree, and sexy. After ‘Overgrown,’ I was inspired to be free-spirited and to let loose and during this process I was consistently asking myself, ‘what’s your motive?’”

Freddie Gibbs continues his run with $oul $old $eparately with the new music video for “Dark Hearted.” Helmed by Aaron Hymes and Rouxx, the animated visual sees Gibbs as himself going on a midnight chase across the city with a bionic rabbit.

NBA YoungBoy is back with a vengeance with his latest project, 3800 Degrees. The 13-track effort features Mouse on Tha Track, E-40 and Shy Glizzy and was announced with a personal note from YB himself: “To whom stabbed me in my back laughing like me being counted out funny- it’s all good”.

RINI joins forces with Beam for his latest single, “Selfish.” The collaborative track between the Filipino-Australian singer-songwriter and the Jamaican-American artist serves as a new chapter in RINI’s career, leaving fans excited for what’s next.

Jamila Woods drops off her first solo release in two years, “Boundaries.” Produced by BLVK, she notes, “‘Boundaries’ is a song about the negotiation between private and shared space in a new relationship, the risk involved in letting someone get close enough to see your rough edges. I think a lot about the Prentice Hemphill quote, ‘Boundaries are the distance at which I can love you and me simultaneously.’ The song is about learning the difference between erecting boundaries out of fear versus out of love.”

Nick Hakim preps for the release of his upcoming album COMETA, which drops October 21, with the new single “M1,” which is co-produced by Andrew Sarlo and the revered DJ Dahi. “I’ll never forget when Nick was opening up sessions he had previously been creating for the album and ‘M1’ was just a DJ Dahi drum loop, a choir synth take plus a sub bass sound with minimal editing. It was an immediate head turner and we knew we had to mine it,” Sarli shared in a statement. “Later that night Nick delivered an insane scratch vocal take that still gives me chills just recalling the first moment I heard him ascend melodically during the chorus refrain. We tend to have one song during the final stages of the album process that is a hard one to crack and the adrenaline rush of finishing ‘M1’ in time was very gratifying. It’s definitely solidified as one of my favorite Nick songs.”

Black Sherif – The Villain I Never Was

Black Sherif drops his debut album The Villain I Never Was, a 14-track effort narrating the Ghanian star’s trials and tribulations. “It took me everything to give life to this body,” the 20-year-old artist said. “The one thing in my life that I gave everything up for. There is life in this body, I hope it treats you good and speaks to you like I want it to.”

Wiki and Subjxct 5 share their brand new single “The Fonz,” which is set to appear in their upcoming collab mixtape Cold Cuts. The single arrives with an accompanying music video directed by Christopher Currents, while Cold Cuts is set to drop October 21.