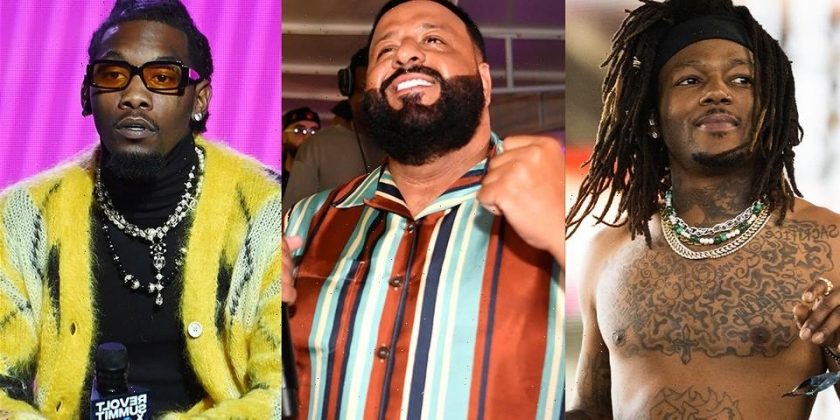 This week’s list is led by JID, DJ Khaled and Offset x Moneybagg Yo, who each released the albums The Forever Story and GOD DID and the single “Code.” Also joining this week’s selection are fresh drops from Joji, Flo Milli, Ezra Collective x Sampa The Great, Butcher Brown, Pi’erre Bourne, Mach-Hommy and FIDLAR.

JID releases his first album in almost four years, The Forever Story. The followup to 2018’s DiCaprio 2 is sprinkled with verses from Kenny Mason on “Dance Now” and “Just in Time” alongside Lil Wayne, EARTHGANG on “Can’t Punk me,” 21 Savage and Baby Tate on “Surround Sound,” Lil Durk and Mustafa The Poet on “Burddanem,” Ari Lennox on “Can’t Make U Change,” Yasiin Bey and BADBADNOTGOOD on “Stars,” Johnta Austin on “Better Days” and Ravyn Lanae on “Lauder Too,” while production was mainly handed by the likes of Monte Booker, Kaytranada, James Blake, Thundercat, DJ Khalil, Childish Major, Groove, Tommy Brown and Cardiak.

Joji announces his upcoming album SMITHEREENS with the record’s latest single, “YUKON (INTERLUDE).” The project drops November 4 via 88rising and will mark his first full-length effort since 2020’s Nectar, as well as incude the gold-certified single “Glimpse of Us” from June.

Pi’erre Bourne unveils his new album Good Movie with the lead titular single. The SossHouse CEO is also set to hit the road from September to November and is set to trek North America, Europe, the UK and Australia.

Flo Milli shares an accompanying music video for her YOU STILL HERE, HO? track, “Big Steppa.” The album dropped in July 2022 and marked her debut full-length, following the success of her 2020 mixtape Ho, Why Is You Here?

FIDLAR makes their exciting return after three years with the single “FSU.” The band’s first release since 2019’s Almost Free, the now-trio — comprised of Zac Carper, Max Keuhn and Brandon Schwartzel — the band describes their upcoming EP as “leaning into the extremes.” They add, “Loud, louder, loud. Three chords and the truth. Catchy and obnoxious. Lyrics are very thought mouth. It’s speaking to the FIDIOTS of the world.”

Ezra Collective enlists Sampa The Great for their newest track “Life Goes On,” the lead single off their upcoming album Where I’m Meant To Be. The cut arrives with a music video helmed by Nathan Miller and shot on-location in London and Lusaka, “London meets Lusaka. Moments of Joy, moments of struggle, but United in a spirit that we must carry on. Life must go on,” the band said of the new track. “We write our music with a consistent will to push the boundaries of what we can mix jazz with. This incorporates the energies of southern African vibes, mixed with our own style of London jazz. And no better person to voice this beauty than the queen, Sampa the Great.”

Butcher Brown preps for their upcoming album Butcher Brown Presents Triple Trey featuring Tennishu and R4ND4ZZO BIGB4ND, which drops September 16, with the new single and official performance video of “777.” The new album began as a hip-hop album from MC and multi-instrumentalist Tennishu, and developed into the group’s own eclectic ode to big band jazz.