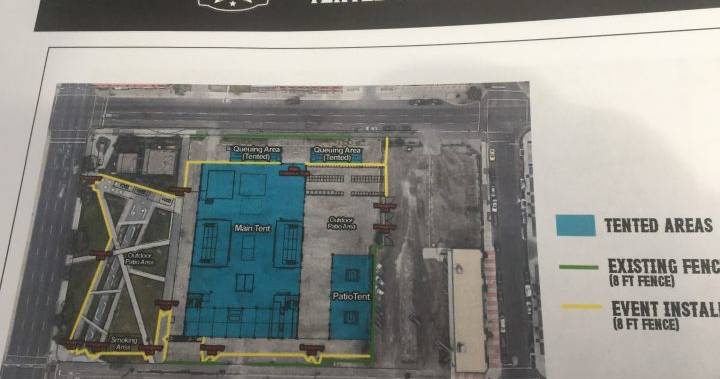 Now that construction has started on the BMO Centre expansion at Stampede Park in Calgary, the Cowboys Music Festival concert tent needs a new home.

The proposed new location is just north of the Stampede grounds at the old Enoch house site. That building burned down in February.

The president of Beltline Neighbourhoods Association is questioning what value his community will get out of being the home of the big party. Peter Oliver said on Saturday the association has been surveying residents in the area.

“It’s not a very popular proposal right now,” Oliver said. “The community is in strong support of the BMO Centre expansion and the potential new hockey arena and the whole redevelopment of this area into a really exciting residential and entertainment and cultural district but nowhere in there was there a 4,500-person beer tent once a year that runs until 3 a.m.”

Cowboys is holding information sessions at the Cowboys Casino this long weekend. People who live at the neighbouring condos are raising concerns about noise and the need for more security.

“This proposal, it’s all going to happen. They’re going to go ahead with it,” said Beltline resident Dawn Bialkoski who attended the session on Saturday. “Our concern is where the proposed security [is] going two blocks the other way and not two blocks [towards Keynote Towers] at all. We need to have security come around to protect our businesses and residents.”

No one from Cowboys would go on camera, but the proposal for the music festival states that the event will have 70 security staff. A dedicated neighbourhood block watch will patrol the perimeter of the site and extend to the Arriva and Guardian towers. Noise exemptions will be required but Cowboys said they will go above and beyond in taking all necessary steps to proactively reduce sound distribution.

“People move here and they know they’re moving next to Stampede,” Oliver said, “but this is now moving what was once part of Stampede on the other side of effectively a sound wall, which is the BMO Centre, directly into a residential area.

“I think there comes a point where there is a limit to how much people are going to be able to tolerate and live with that. I think that, for a lot of residents here, there would have to be a strong case for what an equitable benefit back to the community would be from what is a very lucrative business operation for them.”

Tourism Calgary and the 17 Avenue Business Improvement Area have stated support for the tent at the new location.

The Calgary Municipal Land Corporation, which owns the site, plans to use the tent structure until September for community events, according to marketing vice-president Clare LePan. She said Cowboys is in the process of the development permit application.

Capacity at the new venue will be similar to the old site at around 4,500 people.