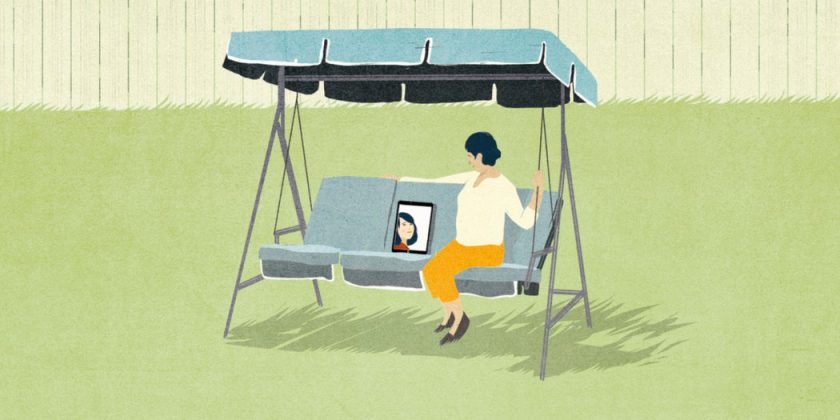 Emerging from a theater on a recent Sunday, I turned on my phone and found a flurry of texts from my daughter. My 2-year-old granddaughter had just smashed her thumb in a closing restaurant door.

Wincing, I read on:

They were headed for an urgent care clinic.

They were waiting for X-rays.

The thumb was broken and needed a splint.

My granddaughter, who lives in Brooklyn, FaceTimes with her other grandparents out West almost every Sunday, a way to help bridge the distance. I live only about an hour away and serve as her day care provider every Thursday, so I haven’t felt the same need to video chat.

But this was probably the most dramatic event of her young life. My daughter, filling me in by phone afterward, said that Bartola (a family nickname and a nod to the beloved former Mets pitcher Bartolo Colón) wanted to show me her splint. So: FaceTime.

She appeared on my phone, holding up her small hand with an enormous, bandaged thumb that resembled the Facebook “like” symbol.

Bartola: I broke my thumb!

Bubbe (it’s Yiddish for grandma): Ouch, ouch, ouch. That must have hurt.

Bartola: I cried, but then I calmed down.

Bubbe: You were very brave.

She explained that at the doctor’s office, she’d gotten not one but two lollipops. Did that help? Affirmative.

With that conversation, I joined the 38 percent of American grandparents, according to a new AARP survey, who sometimes or often use video chat to communicate with their grandkids. Many more told the researchers they like the idea, even if they haven’t adopted it yet. Forty-five percent of us sometimes or often stay in touch by text; a third use email and 27 percent use Facebook. We are becoming digital grandparents.

And we appear to love it. My own highly unscientific poll found enormous enthusiasm for staying in touch with far-flung grandchildren through digital platforms.

How can Vivian Carasso, who lives in Sarasota, Fla., see and hear her 11-year-old granddaughter in Portugal play the “Star Wars” theme on the piano, and applaud the performer in real time? She relies on FaceTime.

How can Nancy Masson, in upstate New York, virtually attend a heavy metal concert with her teenage grandson in Massachusetts? She follows his Instagram account. “I didn’t want to embarrass him or make him feel self-conscious,” she said, so she asked if he objected. Nope! “He said, ‘That’s fine; you keep right on doing it.’”

When Rosie Cantu travels from San Antonio to visit her 18-month-old granddaughter in Iowa, “the baby comes to me without any hesitation,” she said. “I believe it’s because of all the contact we have through FaceTime,” which allows them to coo at each other almost nightly.

Even non-distant families stay in closer contact with technology. Nancy Kolodny’s 10-year-old grandson lives near her in Norwalk, Conn., but he recently received a wearable device called a GizmoWatch as a birthday gift. Parents can program it to allow kids too young for cellphones to call or text a few preapproved contacts.

Now that he can reach her directly, without a parent as intermediary, “it opens up conversations that I’m not sure would happen otherwise,” Ms. Kolodny reported. “Last week, he texted me: ‘Can you come over? I miss seeing you.’”

I did hear from one naysayer, who thought her toddler granddaughter already spent too much time with electronic devices, thank you. This grandma lived nearby, so she could maintain a close relationship without them.

But despite the many warnings about the effects of “screen time” on young children, the experts I consulted turned out to be partisans of real-time digital communication for grandparents.

“I’m bullish on video chatting,” said Dr. Dimitri Christakis, who directs the Center for Child Health, Behavior and Development at Seattle Children’s Hospital. “It can enhance bonding and recognition.”

Dr. Christakis helped develop the American Academy of Pediatrics’ recommendations that parents limit children’s exposure to screens, because of research associating TV-watching with later attention problems and other health and behavioral issues.

But the academy guidelines, he noted, exempt video chat, which is inherently interactive and doesn’t involve the same sped-up pace, overstimulation or passivity as, say, watching cartoons. “I don’t think it should be considered screen time at all,” he said. “It’s something different.”

Even parents with strict no-screen policies make an exception for video chat, said the developmental psychologist Elisabeth McClure, who led one of the few studies to date, surveying 183 parents of infants and toddlers in the Washington, D.C., area. Eighty-five percent of participants used it, and more than a third used it weekly — primarily, they said, to stay connected to grandparents.

Dr. McClure is living in Denmark now and regularly uses FaceTime herself (starting in her hospital room after delivery) to keep her two young children in touch with family in the States. “It’s not for entertainment or education; it’s about building relationships,” she said.

No longer a special event requiring an appointment, video chat has become a way kids can share everyday events with faraway families. They may want to show grandpa a block tower or a drawing, a tooth that fell out or what the tooth fairy brought.

Dr. McClure and her research team have watched families find imaginative ways to use the technology, dancing and singing together, reciting the piggies rhyme while a parent squeezes the child’s toes, playing hide-and-seek while a parent follows the child around with the phone. “Families are figuring out how to act as the arms and legs of the grandparents,” Dr. McClure said. “It’s just magical.”

I wondered about privacy concerns as children grew older. Would they resist contact with grandparents, feeling spied on via Instagram or coerced into video chatting? But Dr. McClure felt those were the same boundary issues teenagers have always learned to negotiate. “It’s part of growing up,” she said.

And Dr. Christakis noted that children who have grown up with digital communications may have a very different take on privacy. “They don’t have the same expectations or place the same value on it,” he said. Besides, “it’s actually good advice: Don’t post anything you wouldn’t want Grandma to see.”

Of course, digital contact has its limits; some experiences lie beyond the reach of phones and tablets. Lucky Bubbe: I got to see Bartola’s splint in person. I smooch her bumps and bruises and catch her as she hurtles down the playground slide. We share French toast for lunch.

Ms. Carasso, who has grandchildren in Australia as well as Portugal, feels grateful for video chat. “It makes it bearable to be so far apart,” she said.

“But I can’t reach out and give a hug or kisses, and I miss that terribly.”