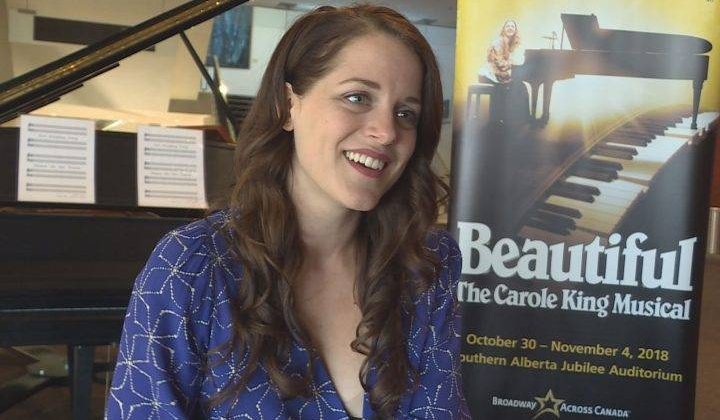 On any given night, Kaylee Harwood could be playing the lead, the secondary lead or one of three other characters in Broadway Across Canada’s presentation of Beautiful: The Carole King Musical.

“I’m actually a swing in the show which means I cover five parts,” she said. “I play five different women depending on who’s in or out. So I’m kind of the insurance policy of the show.”

Indeed she is; Harwood is required to be backstage and ready to go whenever she is needed.

“I’ve had to go on with no notice before or I get to the theatre and find out,” she said. “I’ve had to go on once at intermission. They try give me as much notice as possible, obviously, but that’s what I’m there for: to cover in those sorts of cases.”

Harwood will typically cover other actors’ holidays or illnesses. It’s her first production as a swing and she’s enjoyed the challenge.

The actor said she always been a dedicated student of her craft and being a swing allows to her to continuously learn.

“Part of the joy of being a swing is getting that mental stimulation,” Harwood explained. “And I really enjoy that. I’ve always been a dedicated student and worker and so I really like the studious aspect of it. So I’ve got all my note cards backstage to keep everything straight.”

The Toronto-based performer is just one of six swing performers in Beautiful. She also holds another unique distinction on set.

“I’m the only Canadian in the cast,” she said.

Hardwood has been touring North America with the production for the last 14 months. Beautiful is currently playing at the Southern Alberta Jubilee Auditorium in Calgary until Nov. 4.

“It is so thrilling to have everyone come to where I’m from because we have visited so many places where I don’t know anybody,” Hardwood said.

But it’s Nov. 13 she’s got circled on her calendar. That’s when Beautiful heads to Vancouver — where Harwood was born and raised.

“I used to go to the Queen Elizabeth Theatre [in Vancouver] when I was a kid and now to come and be performing there? It’s unreal. I might have a mini-breakdown when it happens because it’s so surreal.”