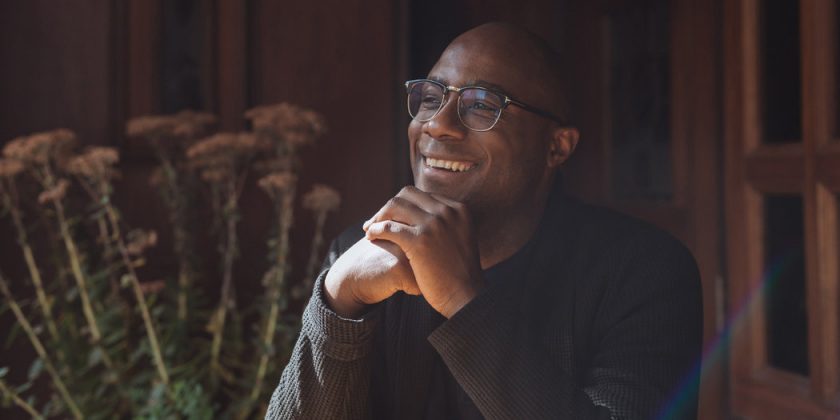 Before the awards circuit and the social media discourse; before the red carpet premiere and the critical consensus; before lights or camera or action, the screenwriter and director Barry Jenkins envisions an audience of one.

It’s a practice he began as a frustrated, underpriced Hollywood outsider, a way to shrink the burden of his own expectations down to manageable size. And it became a ritual after he abruptly transitioned, on the heels of his 2016 film “Moonlight,” into an exalted insider — the first African-American ever to direct an Academy Award winner for best picture — and the question of how to shrink expectations acquired fresh urgency.

Jenkins’s target viewer is usually the person to whom he feels most accountable. For “Moonlight,” about the emotional and sexual evolution of a gay black boy in poverty, it was the playwright Tarell Alvin McCraney, author of the film’s unproduced source material.

“If Beale Street Could Talk,” the director’s latest movie — adapted from the James Baldwin novel of young love and ingenuity under white supremacy, and a three-time Oscar nominee this year, including for best adapted screenplay — was written with Baldwin’s sister, Gloria Karefa-Smart, in mind.

And he has been picturing the novelist Colson Whitehead while scripting his next project, an Amazon limited series adapted from Whitehead’s Pulitzer Prize-winning 2016 novel, “The Underground Railroad.”

“I try and make it really small at first: What would Tarell think? What would Gloria think?’” Jenkins said, during a recent interview in New York before the December limited release of “Beale Street,” which went wide this month. “And then, once I’ve considered that, it’s like ‘O.K., cool — now let me go off and just do the thing.’”

[Read our review of “If Beale Street Could Talk,” a critic’s pick.]

The question of accountability — what is owed and to whom — has tugged at Jenkins, 39, as he has emerged as one of his generation’s most successful interpreters of black imperishability and longing. An empathy evangelist and former moderator for the Telluride Film Festival, he is a careful steward of acutely observed and often startlingly intimate stories, some of which originate in the work of others and all of which are deeply personal.

With “Moonlight” and “If Beale Street Could Talk,” he is one of the few filmmakers to ascend the narrow spires of American prestige cinema with work that regularly centers black characters. And he knows that, amid that uneven landscape, his interpretive talents may extend far beyond the lone audience figure of his imagining, illuminating the contours of black life for viewers who may never have seen it up close. 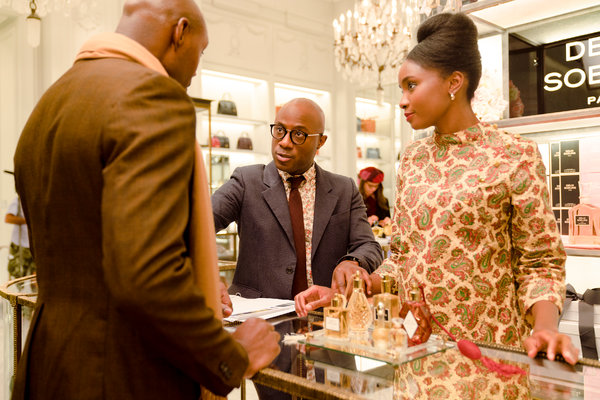 “I could say, very simply, that I make movies for black people about black people,” Jenkins said, considering the scope of his public. “But that’s not the mission statement, because the filmmakers who have moved me the most — Claire Denis, Wong Kar-wai, Jean-Luc Godard — were not making movies for me, Barry Jenkins.”

We were in a hotel suite with Central Park views and soft light that left a glare in his understated, dark eyeglasses. He made only fleeting eye contact, as if it derived from some nonrenewable inner resource.

“So what about all of the white boys and girls in Kansas or Missouri or Germany who might not have been exposed to our perspective?” Jenkins continued. “What would happen if they came and walked a mile in my shoes?”

He was raised in Liberty City, a low-income Miami neighborhood, to a single mother and a father he never knew. When he was a child, Jenkins’s mother became consumed by crack cocaine, and he spent much of his youth in varying degrees of isolation. In “Moonlight,” the main character’s mother, similarly afflicted by crack addiction and played by Naomie Harris, is a creature of both McCraney’s and Jenkins’s autobiographical recollections. Her converse can be found in “If Beale Street Could Talk,” in which a generous, watchful matriarch, played by Regina King in a Golden Globe-winning performance, reflects the director’s maternal ideal.

“I like to think about nature versus nurture, and what would happen if you took Naomie Harris’s character in ‘Moonlight’ and made her the mother in ‘Beale Street,’” Jenkins said. “And if you took Regina King’s character in ‘Beale Street’ and made her the mother in ‘Moonlight.’ How would that affect the children’s lives? How would it affect the families?”

Jenkins became a distinguished football player in high school and studied film at Florida State University. There, he found his tribe in a diverse crew of like-minded cinephiles — the cinematographer James Laxton, producer Adele Romanski, and editors Nat Sanders and Joi McMillon — with whom he has worked regularly ever since.

His debut feature, “Medicine for Melancholy” (2009), was a visually stylish and loosely philosophical relationship study about 20-somethings questioning love and identity in gentrified corridors of San Francisco. With its commingling of French new wave aesthetics, mumblecore austerity and pro-black politics, it prefigured the success of shows like “Atlanta,” “Dear White People” (Jenkins directed an episode of the first season) and “Insecure.”

Jenkins considers himself an introvert and “intensely private” person, a characterization that was corroborated by Romanski, who runs the director’s production company, Pastel, along with Jenkins, fellow Florida State classmate Mark Ceryak and Sara Murphy.

“He is very, very happy to spend a Saturday night by himself drinking a glass of wine, playing his records loud and dancing alone in his living room,” Romanski said.

He is most comfortable engaging through his work. One of Jenkins’s ambitions, he told me, is to “push productive images into the world.”

A productive image, he said, is neither overtly negative nor positive, but faithful to values of truth and empathy.

In “If Beale Street Could Talk,” for instance, the two main characters, a young black couple (KiKi Layne and Stephan James) expecting their first child have their lives upturned when James’s character is wrongly arrested by a racist police officer. The film portrays the central relationship with almost edenic reverence. But the story features no miracles. Instead, it honors its protagonists by insisting on their frailty.

“Sometimes the imagery is framed through the prism of love, often through the prism of struggle, but I think it’s best when the two intertwine,” Jenkins said. “You want just enough hope so that the struggle is real but not insurmountable, so people have something that they can apply to their lives.”

Beyond his commitment to productive images, he is ambivalent about the strange gravity of being one of few black filmmakers to make work earning film’s top prize. Jenkins is loath, in particular, to consider the effects that a creeping consciousness of his expanded audience might have on his art.

Case in point: A much remarked upon feature of both “Moonlight” and “If Beale Street Could Talk” is the use of haunting images in which a character stares directly into the camera, breaking the fourth wall.

Jenkins never intended for these shots to become a thing. He and Laxton, the cinematographer, more or less improvised the technique. But journalists fixated on The Stare. In articles about the director or his work, including a magazine article in this newspaper, it’s become a routine object of aesthetic and sociopolitical inquiry.

“I’m just doing them from my gut,” Jenkins said. “But then Angela explained” — he was referring to Angela Flournoy, the novelist and author of the magazine article — “that for a white audience it might be the first time that they have ever looked a person of color in the eyes for such a sustained, unbroken moment of emotion.”

Jenkins said this thought would never have occurred to him, on his own, in a million years. But now the idea had taken up residence in his head.

What, then, should he do when he makes a new film? Or while shooting “The Underground Railroad”? Keep recreating The Stare in full knowledge of its political and cultural baggage? Or ditch the technique for fear of being labeled polemical, or, worse, predictable?

“This is the next step in my evolution as an artist,” Jenkins said, straightening out his shoulders in the Central Park hotel suite. “The juvenile thing to do would be to say ‘I’m never going to do those shots again,’” he said, using an expletive. “But, instead, I’ll have to be like, ‘O.K., this is manipulative. I get it.’” He sketched himself an alternative solution — “‘Even though I understand what this tool is doing, I’m still going to use it the same way I did when it was coming from my gut’” — but found it insufficient.

He shifted in his chair, collecting a thought. “I don’t understand how you can be a public persona but also be a very diligent and focused artist,” he said.

The writer Ta-Nehisi Coates, a friend of Jenkins’s since the “Medicine for Melancholy” days, told me he empathized with the director’s struggle to disregard the narratives surrounding his work. He recalled watching an early screening of “Moonlight” with Jenkins shortly after Coates’s memoir, “Between the World and Me,” made him heir to a dubious legacy of writers crowned The Voice of Black America.

“I was going through my own thing at the time, and I think I remember telling him that he was going to have it a lot worse,” Coates laughed. He counseled that Jenkins embrace strategic ignorance in his creative life. “You’ve got to go in the box,” he told me. “What I had to realize is that not everything is up to you. You make the work that you want to make and then it goes out into the world and people are going to say what they’re going to say about it.”

Shortly after his Oscar wins for “Moonlight” (Jenkins also took home the award for best adapted screenplay) but before he had gone into production on “Beale Street,” Jenkins received a lunch invitation from another high-profile interpreter of the African-American experience — Denzel Washington.

He said the actor and director, who was unavailable for an interview, gave him a master class in how to navigate the thin air of his newfound celebrity.

“He just sat me down and laid it all out for me,” Jenkins said. “He talked me through the whole evolution of his career — what happened when he was at the point where I’m at and all of the different ways that I could end up doing this thing or that.”

At the lunch, Washington produced a satchel containing decades of personal memorabilia, Jenkins said, which the actor had kept to remind him of pivotal junctures in his life. In the wake of “Moonlight,” the director took this as an invitation to consider his own crossroads.

“It made me feel like I didn’t have to veer just because of new access and privilege,” he said. “You’re already on the road — you just have to keep going.”