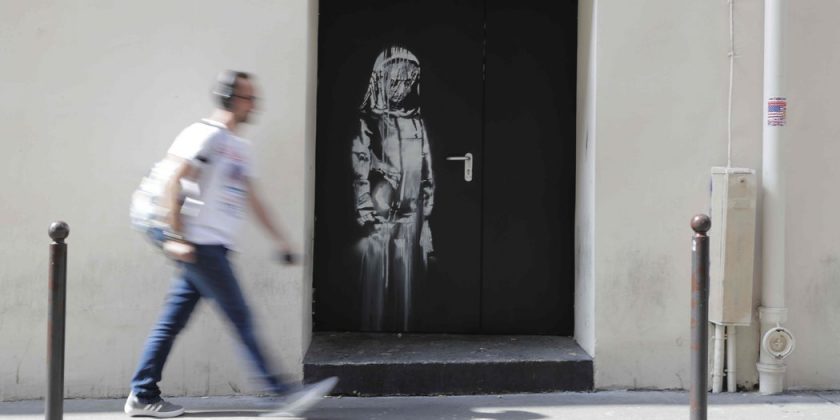 A mural painted on the emergency exit door of the Bataclan theater in Paris, attributed to the British street artist Banksy, has been stolen, the venue said in a post on Twitter.

According to Reuters, a police source said that the door was stolen overnight on Friday by thieves in a van. The Bataclan confirmed the theft on Saturday morning. In French, the venue wrote, “The work of Banksy, a symbol of remembrance belonging to all: locals, Parisians, citizens of the world, has been taken from us.”

The painting of a veiled figure with a bowed head is believed to be the artist’s tribute to the survivors of the 2015 terror attack, in which Islamic State militants killed 90 concertgoers at the Bataclan, and dozens more across the city in a series of mass shootings and suicide bombings. Banksy posted photos of the mural on his Instagram account in June, one of many works that quietly appeared on the city’s walls around World Refugee Day.

The nature of the elusive graffiti artist’s public works, which often comment on issues like greed, pollution or immigration, leave them prone to theft and vandalism. According to Le Monde, one of his murals in Paris was cut completely from a wall just days after it appeared on it. And in 2013, a work entitled “Slave Labour” vanished from the wall of a London discount store and wound up on auction in Miami, before it was withdrawn and returned to Britain.

His works have also become more lucrative on the auction circuit over the years. In October, a spray painted work on canvas called “Girl With Balloon” was sold for $1.4 million before it self-destructed thanks to a secret shredder the artist built into its frame.

In the past, Banksy has encouraged buyers to avoid purchasing public works. “For the sake of keeping all street art where it belongs,” he wrote in a 2008 statement, “I’d encourage people not to buy anything by anybody unless it was created for sale in the first place.”

In its post on Saturday, the Bataclan reiterated this idea, writing that the work stolen from its door “only has meaning in this place.”

“It’s the reason that we wish to leave it free, in the street,” it added, “accessible to all.”