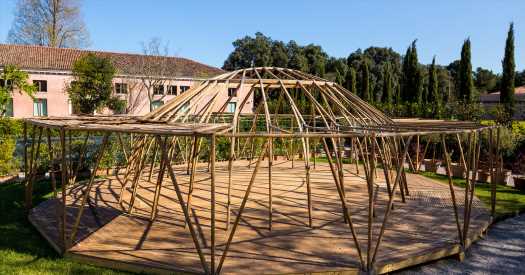 The Church of San Giorgio Maggiore is one of the architectural jewels of Venice. Designed by the Renaissance master Andrea Palladio, it sits prettily on the edge of an island opposite St. Mark’s Square.

For the next six months, the gardens behind the church will host an edifice that could not be more of a contrast: a temporary structure made of bamboo and wrapped in handwoven Moroccan textile.

The structure — known as the Majlis, an Arabic word that means communal gathering place — is one of the collateral (or sidebar) events of this year’s Venice Architecture Biennale. Presented by the Caravane Earth Foundation, a nonprofit established by Qatar’s former ambassador to Moscow, Fahad Bin Mohammed Al-Attiyah, it will serve as a forum for discussion in Venice and then reappear in Qatar, where it is to be reinstalled next year in time for the 2022 Football World Cup.

The designer of the Majlis is Simón Vélez, a Colombian architect who has worked with bamboo all his life. Born in 1949, he drew international attention at the World Expo in Hanover in 2000 when he put up a vast pavilion made of Colombian bamboo. The pavilion, which drew more than six million visitors, was seen as an example of sustainable, zero-emission architecture.

The Majlis grew out of a much bigger project. Mr. Vélez was commissioned in 2018 to design a pop-up village with eight bamboo buildings where artists and craftspeople from around the world would run workshops in the Al-Adaid desert in southern Qatar, according to the Caravane Earth Foundation. 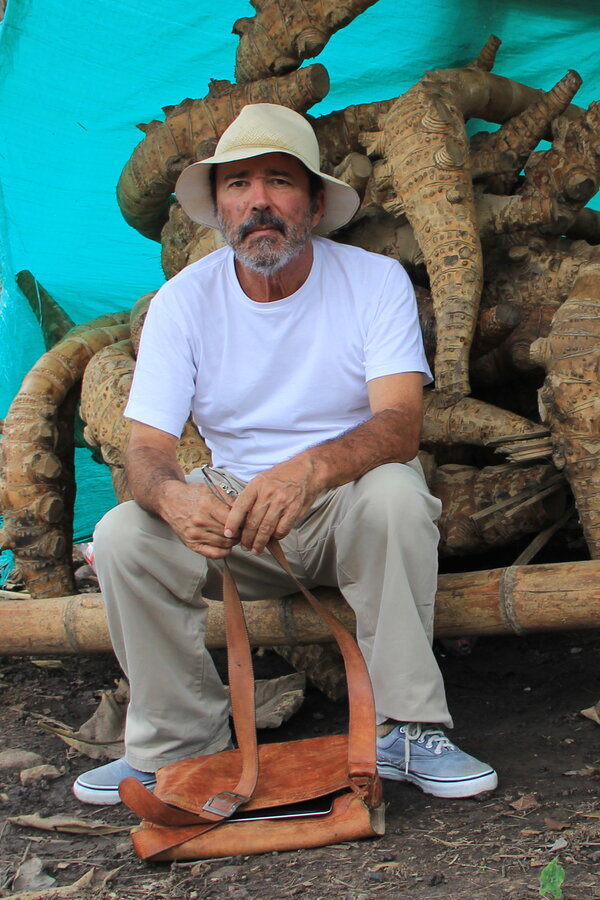 “The idea was to build a nomadic village in the desert that would disappear completely after the winter,” he said. Its purpose was to transmit traditional arts and crafts to younger generations — “teach people how to cook, how to weave, how to paint, how to draw. It was really a very ambitious cultural project.”

When the Covid pandemic scuttled the pop-up village project, Mr. Vélez and his fellow architect (and wife), Stefana Simiç, decided to build a prototype. That prototype is the Majlis that is going on display in Venice.

The architect said the original nomadic village commission was a “very interesting” one, because “it was the first time in my life that I was making textile architecture. We were used to working with bricks, with clay tiles, with cement mortar, with very heavy materials. But I had never built with fabrics, with tents.”

The Majlis walls and roof will be covered with wool woven in the Atlas Mountains of Morocco by Ahmed Chmiti and the weaving community of the city of Boujaad. Inside the Majlis, there will be a Shepherd’s Carpet woven by the Ain Leuh Women’s Cooperative in Morocco.

The Majlis exhibition curator Thierry Morel said that when he first proposed the idea to the curators of the Architecture Biennale, he was not very hopeful. But Mr. Vélez had a “good track record,” and Mr. Morel had found a great location for the temporary edifice: the monastery of San Giorgio, one of the very few gardens in Venice.

He said the bamboo structure helped promote the mission of the foundation: reviving local craftsmanship and traditional architecture and farming.

“Very often, we think of architecture as totally independent from the environment,” said Mr. Morel. “I think it’s time we think more about how architecture and nature should work together.”

Visitors will first be ushered into an exhibition illustrating the traditional uses of the Majlis in Qatari culture. There will be rugs and carpets, bronze objects, ceramics, and musical instruments, displayed alongside historic objects borrowed from Venice’s own collections and originating in Egypt and Turkey.

A separate room and screening room will explain how the bamboo structure and its textile components were made. Finally, visitors will walk through a garden designed by the landscape architect Todd Longstaffe-Gowan, showing how the gardens of Europe were influenced by the East, and how plants were imported via Venice into the Western world.

Mr. Vélez explained that he fell into bamboo architecture by chance. Though he grew up in the bamboo-rich region of Manizales, in Western Colombia, he never thought of working with the material, because there was “a stigma: that bamboo was for the poor.”

His attitude soon changed. “As a young hippie, I became interested in natural materials,” he recalled.

Then a very wealthy client — a German-Colombian named Carlos Lehder, who would go on to spend 33 years in prison in the United States for drug trafficking as a co-founder of the Medellin cartel — hired him to make a bamboo stable for his horses.

What Mr. Vélez discovered was that if he poured liquid cement into hollow bamboo, and inserted screws and bolts and steel plates where the joints would normally go, he would end up with “a very strong connection.”

He realized that bamboo was a kind of “vegetable steel” — as sturdy as steel itself, and highly renewable because of its abundance in nature: Bamboo can grow as much as one meter a day.

Nowadays, Mr. Vélez said, “I design mainly country houses for rich people, because poor people hate the material I use, which is bamboo. Rich people don’t have a problem with it.”

Not that he is wedded to the material himself and incapable of building with anything else. “I love when a client asks me to build a house without a single piece of bamboo,” he said. “It’s just one of the hundreds of materials that you have as an architect.”

For now, bamboo is putting Vélez in the spotlight, and not just any spotlight: on one of the most glorious sites in Venice, and in the vicinity of the architect he admires the most in the world — Andrea Palladio.