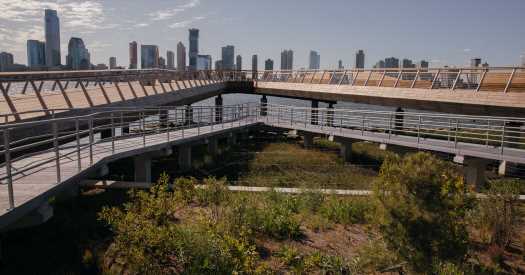 This environmentally themed project features an unusual design, including soaring walkways that lead to an unexpected destination.

The new Pier 26 in Manhattan, which features a human-engineered rocky tidal wetland, opens on Wednesday afternoon. Credit…Celeste Sloman for The New York Times

Expanding a park usually means modifying an existing landscape. The designers of Pier 26 faced a far more daunting challenge: creating an entirely new one in the swift current of the Hudson River.

The results can be seen on Wednesday afternoon, when the revamped pier opens at the end of North Moore Street in Manhattan. The latest addition to Hudson River Park, this 2.5-acre expanse is the city’s only public pier dedicated to river ecology. Incorporating a lawn, a sports court and decks elevated more than 12 feet above the water, it exhibits indigenous plants and trees that hark back to when only Native Americans occupied what is now New York. But the pier’s most distinctive feature is a feat of 21st-century artifice: Because the park’s sea wall prevented developing a rocky intertidal wetland — a science-education bonanza — at the shoreline, the trust decided to engineer one on the river itself.

“We all know that you can build marshland and tidal pools near a bulkhead,” said Madelyn Wils, president and chief executive of the Hudson River Park Trust, the nonprofit public corporation that operates and continues to develop the park. “But how would they actually do 800 feet out on the water?” 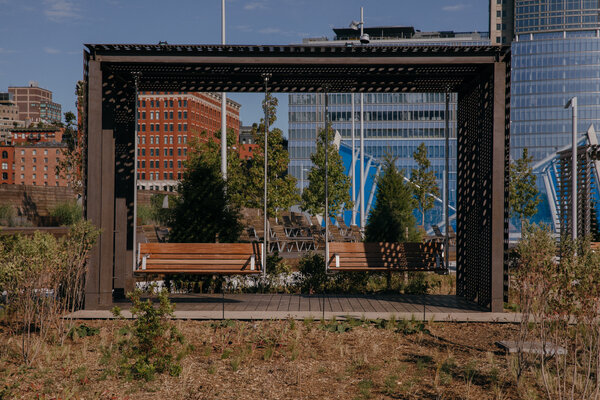 Ms. Wils presented her vision to OLIN, a Philadelphia-based landscape architecture firm. Its team, including Trevor Lee as lead designer and Lucinda Sanders, OLIN’s chief executive, worked with Mueser Rutledge Consulting Engineers and Biohabitats, a company specializing in ecological restoration, to design a 15,000-square-foot wetland. Called the Tide Deck, this human-engineered rocky marsh rests on a concrete platform atop 36 steel piles that descend into the river bottom under and around the end of the pier.

To break up the waves and provide refuge for water fowl, Demetrios Staurinos, the project manager, and Jamee Kominsky, another OLIN landscape architect, selected 1,300 boulders from upstate New York that they assembled “like a jigsaw puzzle,” Mr. Staurinos said. Spaces were carved into these rocks to make tidal pools for marine creatures. To give the marsh plant life, the designers inserted smooth cordgrass into 96 modules of durable polyester that were anchored to the platform.

“It’s sort of like hair transplants,” Ms. Wils said during a recent walk around the pier. “You plant the grass in the plugs,” and then sediment naturally collects around the seedlings.

Madelyn Wils, president and chief executive of the Hudson River Park Trust, said the goal was to create a “beautiful, passive area” that is an urban refuge.

Twice a day, at high tide, this manufactured wetland floods completely, a process that visitors can observe from the decks overhead. During low tide, tour groups and school classes can descend a walkway into the marsh, where they can closely study the Hudson estuary, a vast ecosystem where the saltwater of the Atlantic Ocean mingles with the freshwater of the river’s tributaries. The designers plan to attach Biohuts, artificial habitats to nurture young fish, at different heights along the Tide Deck’s piles. The trust is also striving to rebuild the oyster population, which students will be able to examine.

“We use the park as our living laboratory,” said Carrie Roble, the trust’s vice president for estuary and education. Other species expected to inhabit the environment include microscopic algae and tiny snails; raptors like red-tailed hawks; and American kestrels. (While public programs have not yet been scheduled because of the pandemic, on Oct. 7 the trust will host a live Facebook tour of the Tide Deck, a video of which will remain online afterward.)

The pier’s redevelopment has been long in coming. Built over the footprint of an old maritime wharf, the new Pier 26 was begun in the early 2000s. But the project ran out of funds; except for the City Vineyard restaurant and the Downtown Boathouse, which were independently financed, nothing new has been constructed at the pier since the end of 2008. During this hiatus, the trust developed new funding partnerships: The City of New York, the Lower Manhattan Development Corporation and Citi, which has offices nearby, have paid for the $37.7 million project that is opening now; it has also received grants from New York State’s Environmental Protection Fund.

The trust, which hired OLIN in 2015, treated the pause in construction as an opportunity to re-envision the site. “Aside from being flat, many piers are also kind of one-note — you just want to get to the end,” Mr. Staurinos said. “We wanted to make that journey from the city out to the water interesting.”

That meant creating a series of environments and elevations. As visitors stroll westward, they encounter a sequence of small ecological habitats — woodland forest, coastal grassland, maritime scrub, the wetland and, finally, the river. Ascending walkways on the north and south sides eventually converge in an inverted V around the marshland; at that apex, a 1,353-square-foot platform angles high over the Hudson.

The pier’s perimeter, which offers seating that includes stadium-style bleachers and deck chairs, also has an unexpected north wall with window openings, bar stools and a desk-level shelf for coffee cups or laptops. By providing shade and blocking wind, the wall “is going to extend the seasonal use of this park,” Ms. Sanders said. OLIN also added modern-day gazebos: two sheds, one wood and the other perforated steel, each equipped with pairs of six-foot-wide swings. These designs are “more like a folly, having a bit of fun,” Ms. Sanders said.

The architects describe the project as “choreographed” and quite different from its bustling neighbor, Pier 25. Apart from the sports court, which seemed like a requirement for a neighborhood filled with families, Ms. Wils said the pier was dedicated to “creating microcosms for reading, passive recreation, swinging, looking, sitting in different places and wandering.”

Another goal was sustainability, as well as a rigid substructure designed to withstand another superstorm like Sandy. Instead of rainforest hardwood, the decks and furnishings are made of Kebony, an alcohol-impregnated pine, while most of the metal is stainless steel; both can weather a maritime environment. Tillett Lighting Design Associates also engineered the illumination throughout the site so that it would neither compete with the stars nor disturb the Hudson’s 70 fish species.

The full project, however, is not yet complete. An “estuarium,” a $30 million educational center that is still at the fund-raising stage, and a $4 million playground — with two giant models of endangered sturgeon species to frolic inside — will be built at the eastern edge of the site, just before the pier begins. The objective is the kind of comprehensive urban oasis that New Yorkers first craved in the years following Sept. 11, Ms. Wils said.

“Now, we’re finishing this in the time of Covid,” she added, “when, again, parks have become less of an amenity and more of a necessity.”