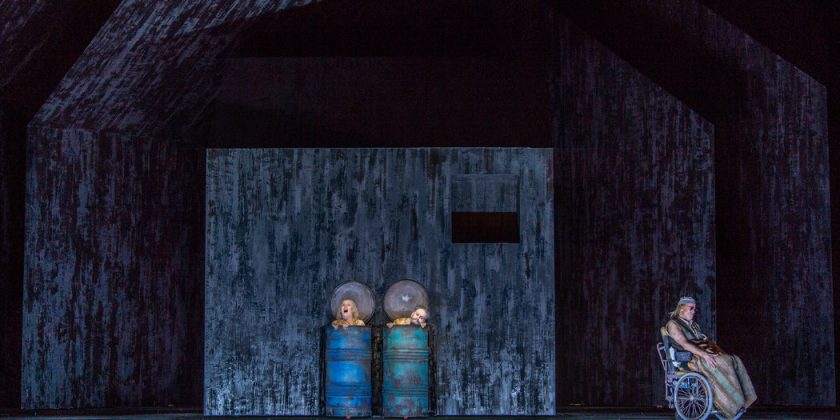 [Read all of our classical music coverage here.]

Happy Friday! I’m filling in for Zachary Woolfe, who is away in Milan for the premiere of “Fin de Partie,” Gyorgy Kurtag’s long-awaited operatic adaptation of Samuel Beckett’s “Endgame.” This opera — which Zachary said is a “patiently, perfectly tailored work” that unfolds with the confidence of Mr. Kurtag’s best music — was 10 years in the making and acts as something of the 92-year-old composer’s farewell to a life, a marriage, an entire culture:

Mr. Kurtag is one of the last who remain of the generation of avant-garde composers that came of age during World War II and in its wake: Boulez, Ligeti, Henze, Stockhausen, Schnittke. Even if the great final scene equivocates — modernism is always on the verge of leaving, it seems to say, yet it is also always here to stay — the opera, drawn from a play that Mr. Kurtag saw in Paris as a young man, is truly goodbye to all that.

Read the rest of Zachary’s magisterial review, then check out our recent profile of Mr. Kurtag.

With one opening past, it’s time to look forward to others:

Kaija Saariaho’s “Only the Sound Remains,” directed by Peter Sellars, is coming to Lincoln Center this weekend. Ryan Ebright spoke with them about this Japanese Noh theater-inspired opera.

In California, a marathon of Fluxus music is on tap at the Los Angeles Philharmonic on Saturday. I wrote about the orchestra’s Fluxus Festival during my visit there last week.

On Tuesday, the Mannes Orchestra will give the premiere of a new edition of Julius Eastman’s long-lost Second Symphony. Seth Colter Walls interviewed the score's editor, who will conduct the concert.

Finally, good news: Florence Price, the female African-American composer whose music languished in obscurity after her death in 1953, finally has a publisher. So you can expect her resurgence to gain momentum as G. Schirmer promotes her music. Here is her Second Violin Concerto. Happy listening! JOSHUA BARONE

In keeping with the theme of spirituality that defines the White Light Festival, the 24-voice Latvian Radio Choir on Tuesday presented a program titled “The Distant Light,” mostly devoted to mystically spiritual works by contemporary Baltic composers. This acclaimed ensemble is also a kind of choral laboratory that invites composers to explore unusual vocal effects, including whistling, ethereal overtones and, a special of these singers, the dramatic use of long, sustained tones, often in extremes of high and low. The basses were especially impressive on Tuesday as they prolonged eerily steady low bass notes, over which other voices would float and mingle.

Here, from a recent recording, is the choir singing one of the works they performed this night: Valentin Silvestrov’s “The Lord’s Prayer” (from his 1995 “Diptych”). Listen to those basses! And here’s a compelling video of the choir performing Arvo Part’s “Salve Regina” with Sinfonietta Riga in 2011 at Riga Cathedral. ANTHONY TOMMASINI

I’ve had countertenors on the brain lately, and not just because we’re approaching season for that most angelic of Christmas fachs. The voice type, which experienced a kind of renaissance in the 1990s, appears to be making another comeback right now, with new opera roles and acting opportunities cropping up at the Metropolitan Opera and on Broadway. Yet while the previous generation tended to float on an airy cloud of early-music primness, this new generation feels a bit more hip. Iestyn Davies is putting his high-flying stamp on a swathe of new operas, most recently Nico Muhly’s “Marnie.” John Holiday is equally at home in Handel’s “Ombra mai fu” and “Fly Me to the Moon.”

And then there’s young Jakub Jozef Orlinski, the handsome Juilliard graduate who won big at the Met’s National Council Auditions in 2016. He is in ad campaigns for Levi’s and Nike, and — mic drop — also breakdances. Last month, Mr. Orlinski released his Warner/Erato debut album, “Anima Sacra,” a collection of sacred arias featuring period orchestra Pomo d’Oro. It’s a generous helping of 23 songs, including works by some Baroque regulars as well as people I didn’t know quite as well, like the 18th-century Domènec Terradellas, whose dignified “Donec ponam” is sung with lovely, twisting, legato line. New York admirers will have the chance to catch the B-boy in action in January, when he makes his Carnegie Hall solo concert debut alongside members of New York Baroque Incorporated. JOEL ROZEN

Despite the snow and sleet on Thursday, most the seats at Alice Tully Hall were full for the sold-out concert by conductor William Christie and his superb Les Arts Florissants chorus and orchestra, performing Haydn’s glorious oratorio “The Creation.” True to his reputation, Mr. Christie led an energetic, richly characterized yet detailed and purposeful performance of this challenging masterpiece. He has had an inconsistent record of tapping top-notch singers for his projects. But for this performance he has three excellent solo artists. The noted French soprano Sandrine Piau was at her luminous best. The two, less-known young male soloists sang impressively and seemed to win many new fans on Thursday. The English tenor Hugo Hymas brought poignant vocal colors and melting tenderness to his performance. Those qualities come through on this recording (with the English Baroque Soloists) of an aria from Bach’s “St. Matthew Passion.” And the California-born bass Alex Rosen sang with robust, deep sound, crisp German diction and instinctive authority. Here he is sounding comparably in command singing one of Schubert’s most intense songs, “Prometheus,” a couple years ago at WQXR. ANTHONY TOMMASINI