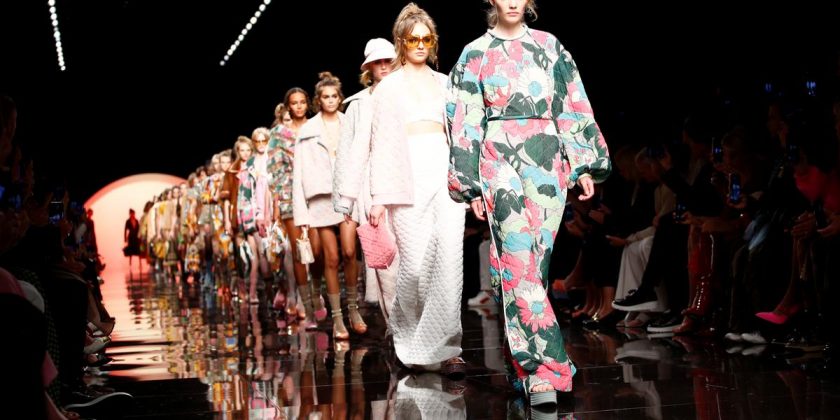 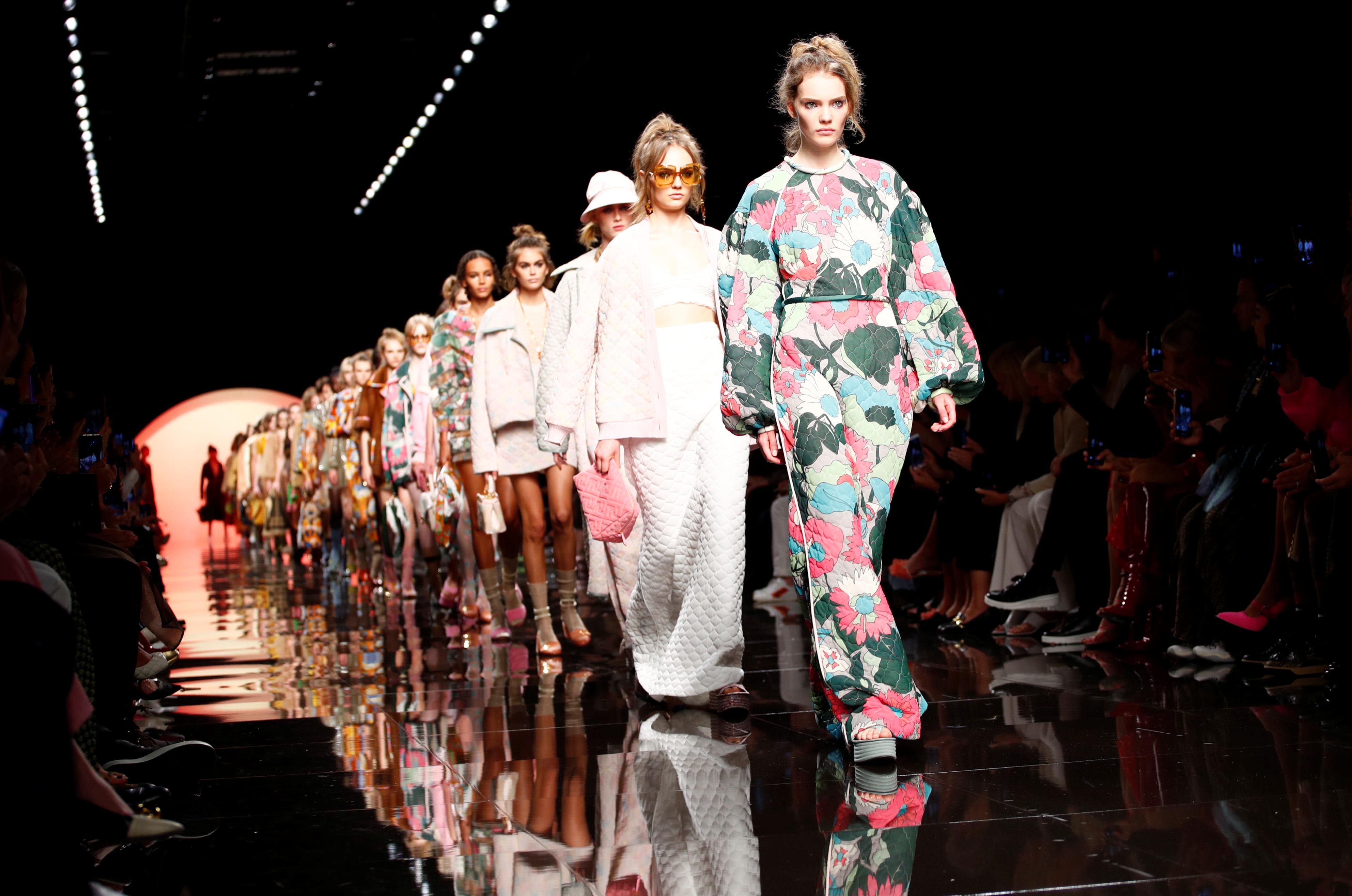 Soft pink, blue, grey and beige dominated the catwalk where models strutted under a blue sky lighting in wrinkled jackets and trousers, the latter straight or gathered at the ankle.

Trousers were striped, silk and pinstripe, and at times also see through, while jackets were round at the collar, wrap-around or tied at the neck. Duster coats and blazers were shiny or in embroidered tulle. Tops were cropped or long and loose.

“The city is the horizon, the attitude is effortlessly feminine,” show notes read.

“A collection in which the clean lines come from a play on subtractions … The balance of soft colours and surfaces that are worn, wrinkled, lightened and worked on create a syntax of a floaty, immaterial style.”

Though the colour palette was mainly neutral, there were bursts of acid green and bright blue punctuating the presentation, which also included loose summer suits and trousers for men, at times modelling topless.

For the evening, the catwalk lighting changed to night as models sashayed in shimmering silver dresses adorned in sparkling sequins and crystals. Silver metallic tops were matched to light see-through trousers.

Models wore hats, round sunglasses and carried plexiglas bags. Footwear consisted of flats adorned in sparkles and sandals as well as eye-catching silver sneakers, some running all the way up to the knee.

Armani, who studied medicine before switching to fashion, founded his label in 1975, building it into a global brand. He will present the Spring/Summer 2020 collection for his main Giorgio Armani line on Saturday.

The designer, who has dressed celebrities and royals, will receive an Outstanding Achievement Award at the London Fashion Awards in December, the British Fashion Council (BFC) said this week.

“With more than four decades in the business, Mr Armani’s contribution to the fashion industry is indeed outstanding,” BFC Chief Executive Caroline Rush said in a statement.

“Renowned for his timeless vision of style and the brands’ ability to stay relevant, he has led the way where other brands have followed.”

Italian label Fendi opted for earthy tones, floral patterns and plenty of quilts at its show.

The latest collection comes some seven months after the death of veteran designer Karl Lagerfeld, who joined the Rome-based brand in 1965 and formed a creative duo with the founding family’s scion Silvia Venturini Fendi.

The show opened with quilted jackets and skirts in pale pink and white, with models then wearing darker tones – green, mustard, orange and brown floral patterned jackets and raincoats, check print coats as well as jumpsuits in camel.

Models, including Kendall Jenner, Kaia Gerber and sisters Bella and Gigi Hadid, often wore socks with their sandals and heels as well as oversized sunglasses. 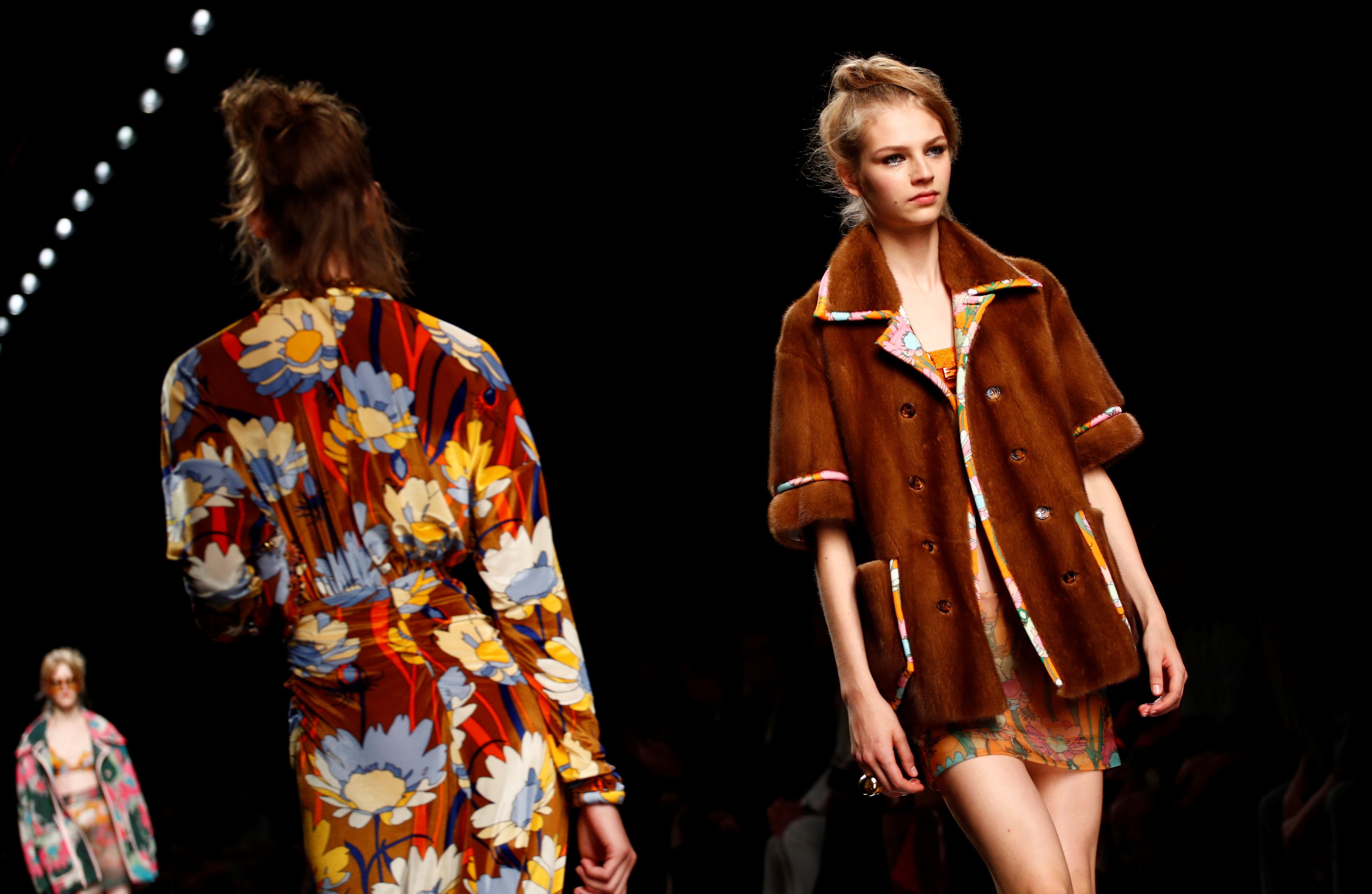 Milan Fashion Week is the third leg of the month-long catwalk season that began in New York and also includes London and Paris.