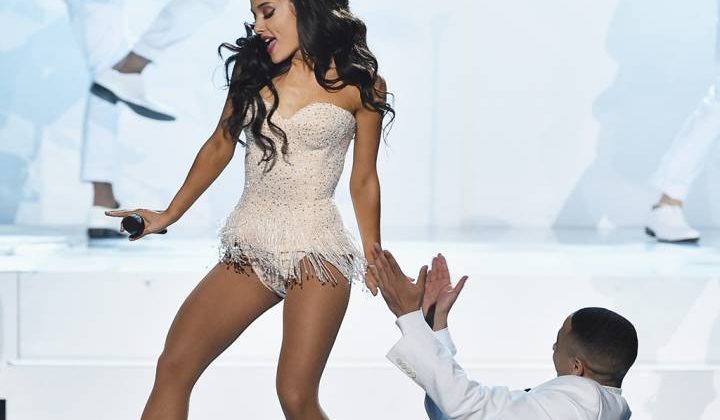 Ariana Grande was announced as 2018’s Woman of the Year on Tuesday morning by music publication Billboard. The 25-year-old will be honoured on Dec. 6 at an exclusive dinner and awards gala in New York City. It will be Billboard’s 13th annual Women in Music event.

Following a massively successful year on the charts and her inspiring social activism, the pop sensation joins the ranks of many other powerful female role models, including Lady Gaga, Taylor Swift, Selena Gomez and Madonna.

Ariana Grande performs at the ‘ARI by Ariana Grande’ fragrance launch at Macy’s on Sept. 16, 2015 in New York City.

Grande has spawned ten Top 10 hits throughout her career. Her latest album, Sweetener (2018) marks her third chart-topping album on the Billboard 200 list. It scored her the largest streaming week ever for a pop album by a female artist.

Her brand new female-empowering single, Thank U, Next, was a global hit on Spotify with 8.19 million listens, marking the most streams in a single day for a female artist ever.

While she’s not busy recording music and touring the world, Grande communicates regularly with her fans on Twitter. She is vocal on a plethora of controversial topics, including mental health, politics, voting and gender equality.

Prior to the midterm elections in the U.S., Grande used her high-traffic Twitter profile to encourage Arianators and readers alike to go out and vote on Tuesday.

Following the March for Our Lives protests in early 2018, Grande performed her fan-favourite Be Alright at a rally as an anti-gun advocate.

It was similar to the benefit concert she held in Manchester last June, One Love. Grande helped raise $23 million to support the victims of those lost in the tragic bomb attack following her concert at Manchester Arena on May 22.

In a recent tweet, The Bang Bang singer even addressed a fan about the benefits of therapy:

“In all honesty, therapy has saved my life so many times.” She added, “If you’re afraid to ask for help, don’t be. You don’t have to be in constant pain.”

“You can process trauma,” Grande wrote, encouraging her fans to seek out help if they should ever need it.

She even has a sharp sense of humour. “Thank God,” she wrote when one fan claimed her music will stop men from approaching women ever again.

Grande’s not shy about her opinions and she tastefully shows why it’s important to project your voice.

Billboard’s Women in Music event will be broadcast over Twitter starting at 7 p.m. ET on Dec. 6.

Grande will return to the stage in 2019 to celebrate Sweetener and her forthcoming album, Thank U, Next. The world tour will commence with a 42-date leg across North America, spanning from March to June of 2019.

Tickets are on sale now and can be purchased through the official Ariana Grande website.