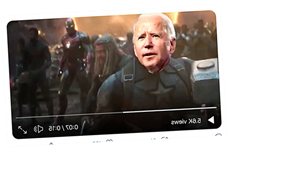 Increasingly restless American voters are shaking off the jitters watching a goofy, inspirational remake of “Avengers: Endgame,” the election version.

The best part is that they all say things they’ve said in real life, like Biden’s “will you shut up, man” to Trump.

Surprises include Elon Musk (not viewers’ favorite) and a smokin’ Hunter Biden.

Even “Star Wars” hero Mark Hamill was hooked on the spoof, but he swore in a tweet that a near like-alike in the video is not him.

Check it out up top.