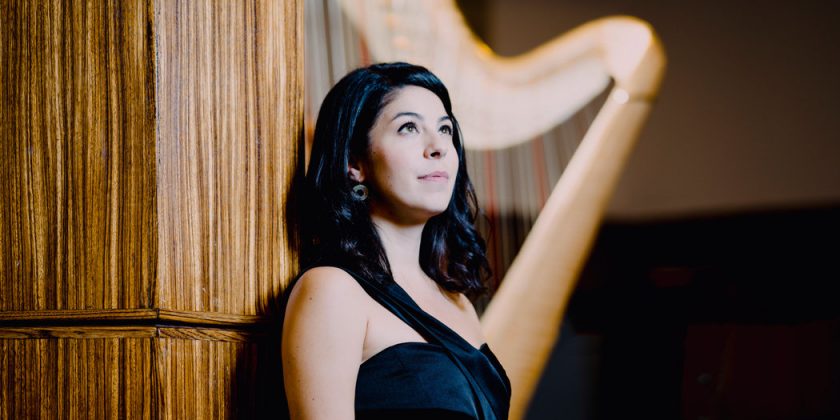 VIENNA — Not long after Anneleen Lenaerts took up the harp at the age of 9, her parents had to buy a new car. It was a pragmatic purchase because their old family vehicle simply did not have enough room to comfortably accommodate the budding musician and her bulky instrument as they drove around her native Belgium for classes, concerts and competitions.

But in the new vehicle, said Ms. Lenaerts, principal harpist of the Vienna Philharmonic, they could take out a middle seat and push the harp inside.

“I was lucky my parents didn’t say, ‘Sorry, Anneleen, just choose the saxophone,’” she said with a laugh over lunch at a cafe across the street from Musikverein, where the musicians were on a break before an almost monthlong tour of Japan and China in November. “I may be one of the only harpists in the world who does not have a driver’s license because when other people were on school holidays learning to drive, I was traveling so much.”

It’s very unlikely that Ms. Lenaerts, 31, will be making a New Year’s resolution to get that license because there simply isn’t room in her busy schedule. In 2018 she has crisscrossed the globe, performing with the Vienna Philharmonic and playing solo concerts in places as diverse as Bruges and Bogotá.

Gustavo Dudamel, the rock star musical director of the Los Angeles Philharmonic, handpicked Lenaerts to play with the Mahler Chamber Orchestra when he was its guest conductor on a tour across Europe in September. That same month, Kalevi Aho’s “Mearra,” which the composer wrote especially for her, had its Finnish premiere.

“Anneleen is a real virtuoso of her instrument,” Mr. Aho wrote in an email. “Her technical virtuosity, her kind personality and her great flexibility in different musical styles are, in my opinion, the reasons why she is as a harpist so in demand.”

Growing up in the Flemish town of Peer, Ms. Lenaerts took up the piano at the age of 8. The next year, when the conductor of their local symphonic wind orchestra, Koninklijke Harmonie van Peer, decided he wanted a harpist, he chose her for the instrument.

“I wanted to play the oboe or the clarinet so I could have a little case to go to rehearsals,” she said. “Usually girls choose the harp because they have seen ‘The Nutcracker’ and they like ballet, but what I knew about the harp was that it gave you calluses on your fingers. I was not a typical girly-girl, so the harp did not attract me because it was so poetic, I just gave it a go.”

It soon became very obvious to all who heard her play that Ms. Lenaerts was a gifted musician; from 1997 to 2010 she won more than 20 prizes and awards in international competitions. By 15 she was working professionally and, after completing her undergraduate and master’s degrees in three years at the Royal Conservatory of Brussels, she went to Paris to train with the solo harpist Isabelle Perrin, all the while continuing to perform with orchestras across Europe.

“I realized how amazingly talented she was and how quickly she could not only learn something but also understand it, which is more difficult,” said Ms. Perrin, who met Ms. Lenaerts when she was 12. “I would say she is one of the top five players in the world, but she has kept that kindness and openness that is so rare when people get to that level.”

In 2010, while in Munich performing with the Bavarian Radio Symphony Orchestra under the conductor Mariss Janson, Ms. Lenaerts learned there would soon be an opening for a harpist with the Vienna Philharmonic. “I was very happy being a soloist, and I never wanted to enter an orchestra,” she said, recalling her hesitation before she decided to go for the tryouts.

“I was ‘number nine’ for the audition, and it was behind a curtain. I was thinking, ‘If this does not go well, I will just go back to Belgium and nobody will ever know.’” She won the audition — at just 23 — and moved to Vienna the next autumn.

“Since her engagement as a member of the Vienna Philharmonic, Anneleen has proven to be an outstanding musician with great excellence,” Daniel Froschauer, the chairman of the orchestra and its first violinist, wrote in an email. “She is a wonderful colleague.”

Ms. Lenaerts, only the eighth woman to join the orchestra (the Vienna Philharmonic was opened to female musicians in 1997), was a quick study, though she was warned that it would most likely take her about three years to feel fully comfortable with the repertoire, which includes 45 operas that often are not rehearsed before a performance.

A highlight of her time with the Philharmonic so far was her first New Year’s concert, in 2012, which Maestro Jansons conducted. “There is a big harp solo in Tchaikovsky’s ‘Panorama’ that I had played with him as an encore in Munich, and he picked that piece for the New Year’s concert so I was playing it with him again,” she said. “It was very special and overwhelming.”

Things are not likely to slow down anytime soon for Ms. Lenaerts. She will, of course, be performing in the New Year’s concert with the Vienna Philharmonic and she plans to continue traveling every two weeks to teach at Conservatorium Maastricht in the Netherlands (she is also on the faculty of the Aspen Music Festival and School in Colorado). In March she will perform at the Louvre in Paris and head to New York to play with the Vienna Philharmonic at Carnegie Hall. Later in the spring, after a number of soloist engagements, she will record Mr. Aho’s double concerto for harp and English horn with the Antwerp Symphony Orchestra.

In the spring Warner Classics will release her third album, “Nino Rota: Works for Harp by Anneleen Lenaerts.” It will feature new arrangements for the harp of music by the Italian classical and film composer Nino Rota, best known for his scores for movies including “The Godfather” and “La Dolce Vita.”