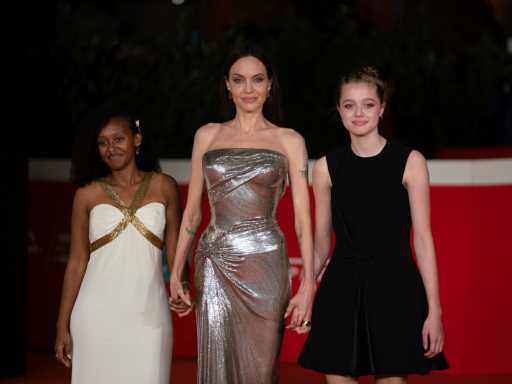 One of the Jolie-Pitt kids might be going into the family business: Shiloh Jolie-Pitt. She’s recently been making the rounds on the red carpet while mom Angelina Jolie promotes her latest film, Eternals. Those appearances are reportedly drawing interest from the fashion industry.

The 15-year-old apparently “has a couple offers” to model and mother and daughter are seriously thinking it over, according to a Life & Style insider. Angelina started her professional career at 16, very close in age to Shiloh, so she knows what it takes to navigate a public career in your teens. But the Maleficent star wants to make sure that this is her daughter’s decision and “will guide her as best she can” if that’s the direction Shiloh goes in.

We certainly know that her children are fashionistas since we’ve already seen Zahara rock her mother’s 2014 Oscars dress and Shiloh recently sported Angelina’s Dior dress at the U.K. premiere of her Marvel film. “I’m like, ‘Oh my god, wear it and wear it better than me! Take it, it’s your turn,’” Angelina explained to E! News Daily Pop. “I’m that mom.” The Oscar winner is also the parent, who isn’t going to make a rash decisio, even if “there’s interest from the fashion world,” per the Life & Style source.

And if Shiloh decides that the modeling industry is for her, she will follow in the footsteps of many famous offspring walking the runways, including Kaia Gerber, Leni Klum and Lily-Rose Depp. Dad Brad Pitt might have some concerns about his daughter in the spotlight, per In Touch, because he “doesn’t want her growing up so fast.” Yet “he’s proud to see her on red carpets” because “it’s been a confidence boost for Shiloh.” The source also revealed, “Of course, he worries about the effect of Hollywood on all his kids, but he does trust Angie’s instincts in this area.” So hopefully, mom and dad can support Shiloh together, no matter what she decides to do.

Before you go, click here to see kids who are following in their supermodel moms’ footsteps.