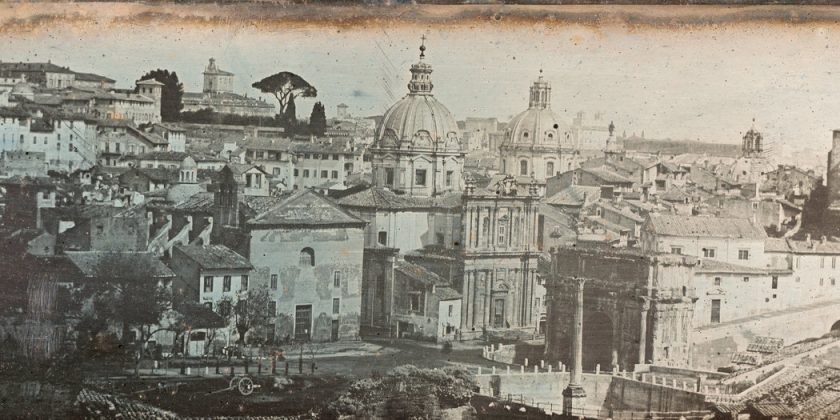 Can you even remember a time before Google Image Search and Street View, before we all had instant access to far-flung sites like the Parthenon, the Dome of the Rock, a stretch of empty highway in the Australian outback? The whole inhabited world has now been pictured and cataloged, and we have so fully embraced the archive that it feels like an extension of our collective mind. In the infinite scroll of the search results page you can forget that once not every place was visible. Someone, in every place, had to take the first photograph.

In dozens of cases, that first photographer was Joseph-Philibert Girault de Prangey (1804-1892), a Frenchman of astonishing artistic ambition and considerable tech savvy. In 1842, three years after his countryman Louis Daguerre unveiled the world’s first practical camera, Girault set out on an epic adventure across Europe and into the Middle East, lugging custom photographic equipment that weighed more than a hundred pounds. He returned with over a thousand photographic plates, including the first surviving daguerreotypes made in Greece, Egypt, Anatolia, Palestine and Syria.

More than 120 of them are on view in “Monumental Journey: The Daguerreotypes of Girault de Prangey,” a buffed jewel of an exhibition now open at the Metropolitan Museum of Art.

“Monumental Journey,” organized with the Bibliothèque Nationale de France and curated by Stephen C. Pinson, of the Met’s department of photographs, is the capstone of a strong season of early photography in New York. (Other highlights include Anna Atkins’s botanical blueprints, at the New York Public Library through Feb. 17; and the groundbreaking “Posing Modernity,” at Columbia University through Feb. 10, which includes photographs of 19th-century black Parisians.)

Digital reproductions can’t capture the glistening silver surfaces of Girault’s daguerreotypes, which appear at the Met in free-standing cases, illuminated by pin lights. But put yourself back in the 1840s, and try to imagine them as something less gemlike. To viewers of his day, these pictures from Rome and Jerusalem were the most cutting-edge products of new media.

Before his journey, Girault visited the monuments of Paris to master the fundamentals of the daguerreotype process, in which light passes through the lens of a box camera onto a silver-coated copper plate, producing highly detailed images that, early viewers thought, glistened with the force of truth. (There are no negatives; each daguerreotype is unique.) Since the camera had a long exposure time, architecture was an ideal subject for early photography. This daguerreotype of the Tuileries Palace shows how Girault was beginning to understand photography as an archival medium — whose value, in this case, Girault could not yet know. While the pavilion in the back still stands, as part of the Louvre, the Tuileries Palace is gone: In 1871, during the Paris Commune, revolutionaries burned it to the ground.

Daguerre had already commercialized the box camera by the end of 1839, but Girault, before setting out on his journey, designed a custom kit. His camera held an oversized plate of about 7½ x 9½ inches, which could be rotated vertically or horizontally, plus a dark slide behind the lens that could be pulled to expose just a part of the plate. The result: Girault could make the world’s first multiple-exposure photographs. He would usually cut the plates into wide panoramas or uncommon vertical images. But sometimes, when it suited his systematic study of monuments, he would present his double exposures jointly — as in this daguerreotype from Corneto (today called Tarquinia, northwest of Rome) that contrasts a Romanesque bell tower with the double vaults of a Gothic window.

North and East Sides of the Parthenon, 1842

Photography came into being just as archaeology was being standardized into something like a science. (Previously the study of buildings of the past was called “monumental history,” on which this show’s title is a play.) In Athens, whose monuments were far less well known to French audiences than those of Rome, Girault made more full-size daguerreotypes than anywhere else. Up on the Acropolis, the Parthenon remains strewn with rubble, and wooden scaffolding is visible behind the colonnade. In another of Girault’s images, you can just make out a tripod, forerunner of today’s selfie sticks.

More than the marbles of Greece or Rome, it was the architecture of the Islamic world that most animated Girault’s archival impulse — a decade earlier he had studied Moorish and Arab buildings in Spain and Tunisia. This was still a young field of study in early colonial France, and his photographs of minarets and mosques in 1842 and 1843 offered an unprecedented record of medieval Islamic architecture. Several daguerreotypes here foreground the ornament and patterning of Egyptian buildings; this one captures every edge of the involute roof of a 16th-century mosque, festooned with knotty hearts and flowers.

Girault was an aristocrat from a conservative stretch of northeast France, and he relied on a tidy inheritance to pay for his travels. Along with his efforts to capture and systematize the world’s monuments — an endeavor with its own colonial baggage — he also made images of sailors, porters, horse drivers and women like this Egyptian: unveiled, smoking a hookah, and looking straight forward. The colonial gaze finds what it wants, and the Met show’s mottled, spectral images of camels and palm trees reveal how Girault indulged French fancies of the East. But by picturing this world via daguerreotype, Girault also insisted that it was not a timeless place, outside of history. It was as real as Paris, and picaresque fantasies were harder to maintain in front of the lens.

French travelers in the late 1830s and 1840s would have kept up with what the newspapers called “the Oriental question” — the international struggle set off by Muhammad Ali, an Ottoman army officer who took control of Egypt and threatened to sack the imperial capital of Constantinople. This first-ever daguerreotype of the city pictures the same sights that tourists in today’s Istanbul glide past with their camera phone’s panorama function: the tiered Blue Mosque on the left, the baroque Nuruosmaniye Mosque at center, the imposing Hagia Sophia at right, and the radiant Bosporus stretching along the back. Like us, Girault was using the sweep and miniaturization of the panorama to document a roisterous city, where past beauties framed contemporary political troubles.

Portal, Church of the Holy Sepulchre, 1844

Girault made the first known photos of Jerusalem, which the Ottomans had only retaken from Muhammad Ali a few years before. He failed to gain admission to several of the holiest Muslim sites, but at the entrance to the Church of the Holy Sepulchre, venerated by Christians as the site of Jesus’s burial and resurrection, he captured the grooved arches and ornate Byzantine columns of the two entranceways — one of which was, and remains bricked shut. This is one of the show’s only photographs to include passers-by, who inscribe the image into the reality of the 1840s. At right is a veiled parishioner, blurred, by the camera’s long exposure time, into a phantasm.

Viewed From the Antioch Gate, 1844

The eastern extreme of Girault’s journey was booming, cosmopolitan Aleppo, where he made this daguerreotype of its ancient ramparts; poking out at top center is the minaret of the Great Mosque. After his death the images languished in the custom wooden boxes he designed, passed into the hands of a distant relative, and only gained wide attention when they came up for sale in 2003. As the world’s oldest photographic archive, Girault’s travel pictures offer a tantalizingly familiar mapping of the world through images, and their modernity pierces sharpest when they picture places razed or renovated in the intervening decades. Some, like this one, picture sites destroyed even more recently. In 2013, during the Syrian army’s horrific onslaught of rebel-held Aleppo, the minaret crumbled into powder. 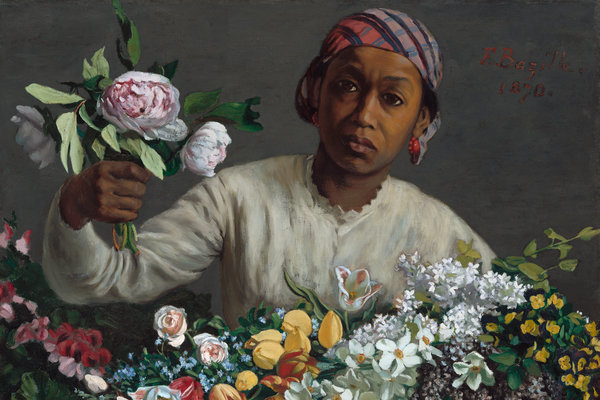 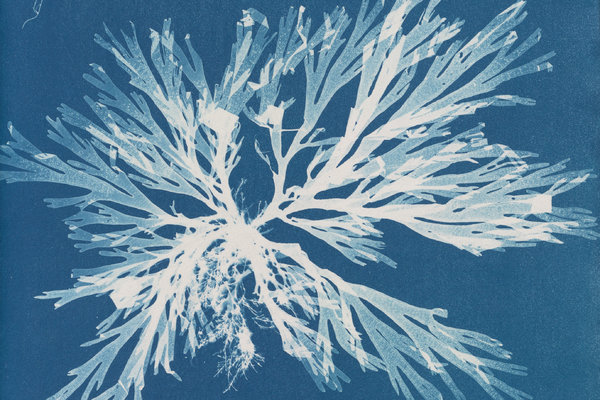