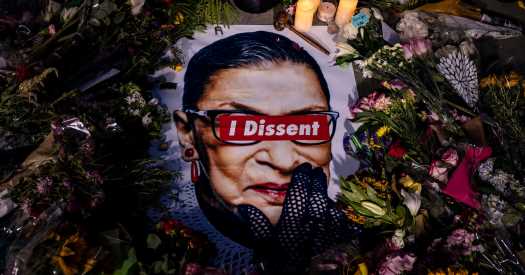 The internet had learned to love Ruth Bader Ginsburg, so it was not surprising that when the news of her death broke on Friday evening, social media lit up with outpourings of love and admiration for this diminutive octogenarian who had been cast as an iron-pumping, dissent-slinging legal ninja.

But those who celebrated her as a one-woman bulwark against the collapse of democracy might have been surprised by something else that bubbled up. Within hours of her death, there also appeared more than a little snarking about the pop-hagiography around her, edged with insinuating questions about just how far-ranging her vision of equality was.

Some noted her poor record of hiring Black law clerks and her comments in 2016 (which she later apologized for) calling Colin Kaepernick’s national anthem protests “dumb” and “disrespectful.”

Others re-upped longstanding critiques of R.G.B.-mania, and perhaps even of the judge herself, as reflecting a myopic “white feminism.” On Twitter, there were calls to remember those “left behind” by the brand of feminism Justice Ginsburg supposedly advanced, along with mocking references to the public grief over her death as a “white women’s 9/11.”

“What conception of women’s rights, and what kind of feminist movement, might have died with Ginsburg?,” Melissa Gira Grant wrote in The New Republic, questioning what she called “the false idea of Ginsburg as liberal or feminist savior.” 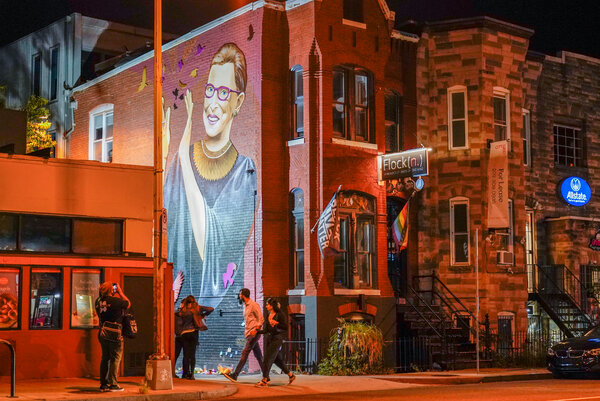 The whiff of a backlash reflects longstanding tensions within feminism, as a movement sometimes criticized for being symbolized by, and primarily serving, middle-class white women has been challenged by a perspective that emphasizes the interplay of race, class, gender and other factors. It’s a tension that has only grown amid the Black Lives Matter protests of the past summer, as some have questioned whether a highly empowered older white woman ensconced in an elite institution was a fit hero for the moment.

But some who share the broader critique of feminism say that seeing Justice Ginsburg as a symbol of a blinkered white perspective is as reductive as an R.B.G. sticker.

“As a Black person, I definitely would have liked to see her be more forward thinking on racial justice issues over the past few years,” Imani Gandy, senior editor for law and policy at Rewire News and co-host of the “Boom! Lawyered” podcast, said. “But denigrating her as an out-of-touch white feminist is a real disservice.”

“There’s this weird demonization vibe that’s really blowback from a lot of the R.B.G. feminist cult-icon stuff that she didn’t ask for,” she said.

Justice Ginsburg’s towering reputation as a legal thinker rests on work she pioneered in the 1970s, through the American Civil Liberties Union’s Women’s Rights Project, which she co-founded. In a string of landmark cases, she successfully challenged the Supreme Court’s view that the equal protection clause of the 14th amendment guarded only against racial discrimination, but permitted sex discrimination (which was often justified as being for women’s own good).

But her fan culture is of much more recent vintage, and springs, paradoxically, from her defeats, rather than her victories. In 2013, Justice Ginsburg issued a blistering dissent in Shelby County v. Holder, denouncing the Court’s invalidation of central portions of the Voting Rights Act of 1965 on the grounds that they were no longer necessary “like throwing away your umbrella in a rainstorm because you are not getting wet.”

The dissent, which Justice Ginsburg read aloud from the bench, drew an electric response. The digital strategist Aminatou Sow, and the designer Frank Chi posted stickers reading “You Can’t Spell Truth Without Ruth” around Washington. The dissent also set off an explosion of online memes, cataloged in the Notorious R.B.G. Tumblr account started by Shana Knizhnik, a law student.

The journalist Irin Carmon, who, with Ms. Knizhnik, -wrote a 2015 book inspired by the Tumblr account, said that Justice Ginsburg became famous as a “symbol of dissent” as much as of feminism, and that the meme culture was not just about her, but about what she was calling attention to.

“And it’s always been important that the genesis was Shelby County,” she said. “As important as her women’s rights work was her broader commitment to equal justice and civil rights.”

Ms. Sow, now an author and host of the podcast “Call Your Girlfriend,” said that some criticisms of the tote-bag version of R.B.G. fandom were warranted. “It speaks to a real laziness in our culture to elevate people and think you’ve done the work,” she said.

But she pushed back against what she said were facile critiques of Justice Ginsburg’s legal work as “white lady” feminism.

“The reason so many young people get to be blasé or cool” by trashing Justice Ginsburg’s record as insufficiently radical, or overly tied to institutions and incremental change, she said, “is that she created this world where people are free to do that.”

“She seems like this older relic,” Ms. Sow, who is 35, continued. “But the point of being a trailblazer is she gets to age into a world where people my age don’t have to remember how hard it was. I mean, not too long before I was born, women couldn’t even get a credit card.”

Some legal scholars argue that Ginsburg’s work, particularly as a litigator, was more intersectional — a term the legal scholar Kimberlé Crenshaw coined in 1989 to describe the complex ways gender, race and other aspects of identity interact — than is commonly acknowledged.

Melissa Murray, a professor at New York University Law School who focuses on family law and reproductive justice, noted that Justice Ginsburg’s first brief filed to the Supreme Court, in the 1971 case Reed v. Reed, also credited as co-authors the African-American legal scholar Pauli Murray and the leftist feminist Dorothy Kenyon, who had pioneered the legal theories she drew on.

“She was always very explicit in her career about giving appropriate deference and respect to the role of Pauli Murray, who was not only an African-American jurist, and largely forgotten until recently, but also a queer woman,” Professor Murray said.

Justice Ginsburg’s cases as a lawyer, including a 1973 challenge to North Carolina’s forced sterilization program, often involved working-class or poor plaintiffs, including women of color. Professor Murray also noted a little-known amicus brief that Ginsburg co-wrote in a 1977 Supreme Court case challenging the constitutionality of a Georgia law allowing the death penalty for rape.

That brief, filed while she worked at the A.C.L.U., addressed the unequal application of the law in cases of Black men convicted of raping white women, criticizing it for reinforcing both patriarchal and racist ideas by treating white women as the property of white men and Black men as dangerous interlopers.

“It’s a real rebuke to people who argue her feminism did not take account of race,” Professor Murray said. “It very clearly did, in a profound way.”

Fatima Goss Graves, the president and chief executive of the National Women’s Law Center, also questioned any implication that Justice Ginsburg, either as a lawyer or a judge, had represented an elitist vision of equality.

In her dissents, Ms. Goss Graves said, Justice Ginsburg repeatedly chided the Court for failing to understand how discrimination worked in the real world, She noted what turned out to be Justice Ginsburg’s last dissent, issued in July, in a contraceptive case, which argued that the court’s ruling would leave many poor women unable to afford birth control.

“She was deeply unafraid to name the many problems with the decisions coming out of the majority, and to do it in a way that put the lives of regular people forward,” Ms. Goss Graves said.

The parsing of Justice Ginsburg’s full legal legacy will be a project of decades. But in the more immediate term, debates about her suitability as a rallying point and icon may have less to do with her than with the limited cultural space granted to “great” women, who have been as rare in our acknowledged public pantheon as on the Supreme Court.

“Individuals who come to bear representative weight are always going to embody contradiction and imperfection,” Rebecca Traister, a writer for New York magazine and the author of “Good and Mad: The Revolutionary Power of Women’s Anger,” said. “Those who become symbols can be so easily torn down.”