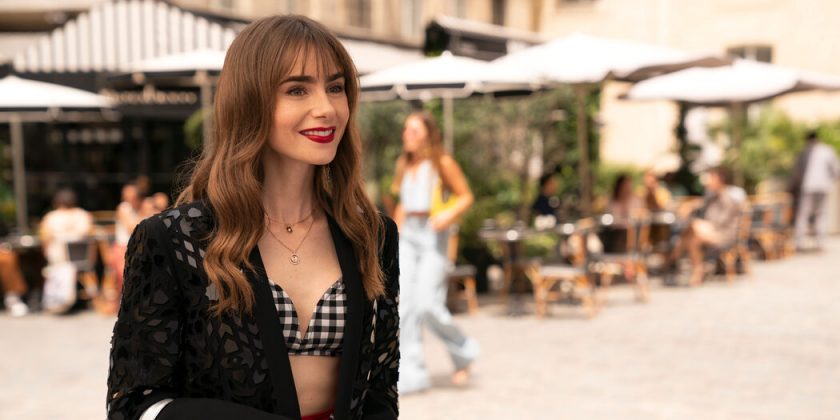 Real-life Emilys in Paris complain that the show’s heroine, clad in over-the-top couture and barely able to speak French, is giving them a bad name. 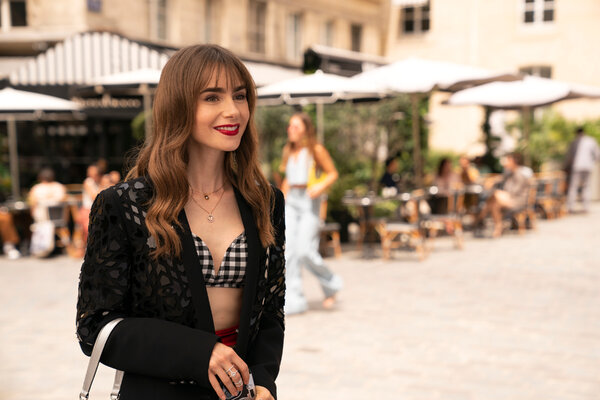 In Season 3 of “Emily in Paris,” Emily Cooper, moonlighting as a waitress — albeit one wearing designer flats — confuses the words “Champagne” and “champignons,” causing a horrible allergic reaction in a customer at Chez Lavaux, the restaurant where her erstwhile French lover Gabriel is head chef.

The scene made Nicole Pritchard, a Paris-based real estate agent, yacht broker and part-time yoga instructor from Virginia, clutch her Hermès scarf in horror. ​ After all, she huffed, Emily (played by Lily Collins) has been living in the French capital for about a year and had a Champagne brand as her client at the fictional luxury marketing firm, Savoir where she worked. How is it possible, she asked, that Emily can’t tell the difference between Dom Pérignon and mushrooms?

“Emily embarrasses me, as I don’t see her trying very hard to integrate into French life,” Pritchard, 41, who has lived in Paris for 20 years, said on a recent day, speaking in hushed tones from the lobby of the glamorous Hotel Costes, where she peppered her sentences with carefully enunciated French. “After all those language classes, she should know the difference between Champagne and champignons,” she added. “It’s two or three syllables. It’s not that hard.”

Since its premiere in late 2020, the popular Netflix series about an American 20-something who moves to Paris for an unexpected job opportunity has spawned a backlash among the French, who complain that it portrays them as nasty, haughty and lazy while projecting Paris as an urban fantasyland, filled with luridly-colored berets, serial philanderers and malevolent waiters.

When Season 3 was released in late December, Le Monde, the influential French newspaper, published a cri de cœur, sniping, “It is time to consider at least one season of Emily Away from Paris.” Writing last week in the left-leaning French newspaper Libération, David Belliard, the deputy mayor of Paris, railed against the show’s “Disneyland Paris, which is confined to the districts of the ultra-center and is inhabited only by the richest people.” The show, he complained, also seemed oblivious about climate change and the scarcity of resources.

But perhaps even more triggered by the series than the French are the real-life Emilys in Paris, American expatriates, who complain that they have spent years perfecting understated elegance and the rolling of their R’s, only to have a brash Chicagoan, in a structured Dolce & Gabbana Zebra-print jacquard jacket with wings, swoop in and ruin their image.

The World of ‘Emily in Paris’

Lily Collins stars in the Netflix series as an American social media wiz in the French capital.

Emily Hamilton, an actual former Emily in Paris, who previously worked in the culture section of the French embassy in New York, said she gave up watching the show; no one, she said, including Emily or her mean fictional boss Sylvie, played with biting insouciance by Philippine Leroy-Beaulieu, resembled anyone she had ever met in France.

“Everyone is an exaggeration,” she said. “It all feels completely absurd.”

And among those cringing is even Rebecca Leffler, 40, who has been dubbed “the real ‘Emily in Paris’” in the French media and is a sometime food writer who aspires to be “the Julia Child of kale.” A former New Jersey resident, she worked as a consultant for the series during Season 1, drawing on her two decades of expatriate life in the French capital to help shape Emily’s on-screen Paris life.

Like Emily Cooper, Leffler moved to Paris in her 20s, and worked in a luxury division within Publicis Groupe, the French advertising company. While she recognized that Emily’s chronic bumbling was a necessary narrative conceit, Leffler said she was nevertheless irked by Season 3 because Emily always seemed to get what she wanted — haute couture, handsome men, business wins — while never seeming to encounter the harsh realities she had, like French bureaucracy, spiraling rents and gnawing homesickness.

“Emily’s biggest struggle is accidentally cutting her bangs while every hot man she meets falls for her,” Leffler said. “She posts a croissant on Instagram and suddenly has a gazillion followers. She has an entry level marketing position and can afford expensive designer dresses. I mean, are they kidding?”

Members of the “Emily” creative team at Netflix, apparently fed up with perceived Emily-bashing, declined multiple interview requests, as did Darren Star, the show’s creator. But Star has previously stressed that “Emily in Paris” is a glamorous love letter to Paris by a young American woman who had never lived there. Aspirational fantasy — not social anthropology.

Pritchard, a Virginia native who also moved to Paris when she was Emily Cooper’s age, said she had initially cheered the character as she grappled with Parisian dog poop and heartbreak, providing comic relief during Paris’s difficult pandemic lockdowns. But by Season 3, she said her patience had fizzled like bad Champagne after Emily grossly mispronounced “bien sûr” (“of course!”) flashed her midriff at the office and mistook George Sand, the French romantic writer, as a man.

“My early inspiration for moving to France was the 1954 Billy Wilder film ‘Sabrina,’ starring Audrey Hepburn as an awkward American 20-something who transforms into an elegant creature and queen of her own destiny, thanks in part to her French mentors,” she said. “Sabrina, Emily Cooper is not!”

Pritchard said her weekly pilgrimage to Café de Flore, where Simone de Beauvoir and Picasso once puffed and preached, had been ruined by the dozens of raucous “Emily in Paris” pilgrims who now swarmed the cafe, taking Instagram-ready selfies on one of the several 2-hour tours of Emily’s favorite Paris haunts, including her Fifth arrondissement apartment. Some wear fire engine red berets, just like Emily.

Such is the ubiquity of the series in the global cultural firmament that Paris hotels, restaurants and bars say the tourism industry is benefiting, and cite “The Emily effect”: Emily-obsessed American tourists arriving in droves. In late December, McDonald’s in Paris introduced an “Emily in Paris” menu featuring the McBaguette, complemented by a duo of chocolate and raspberry macaroons. (In Season 3, Gabriel, a French chef aspiring for a Michelin star, improbably, calls McDonald’s a “little treat.”)

Pamela Druckerman, 52, a Paris-based American writer from Miami, who has written books on French motherhood and French sexual mores, lamented that the show treated Paris as a “two-dimensional cartoon” in which Emily can journey from Montmartre to the Left Bank in what seems like a nanosecond, “without ever taking the metro or encountering homeless people.” Emily — brash, naïve, and clad in metallic blue knee-high boots — held up an uncomfortable mirror of everything she had striven not to be.

“We try so hard not to be the ugly American, and here is Emily with her terrible accent and garish clothing, shouting at French people in English and expecting them to understand,” she said. “Being an American expat in Paris is all about trying to seem vaguely French or invisibly American, and Emily is the opposite of that.”

Fetishizing Paris is part of a long tradition among American cultural observers, from Hemingway to Woody Allen, many of whom have romanticized the French capital as if its streets were bathed in Chanel No. 5. Yet American expatriates and French luminaries alike said the show seemed grotesquely divorced from 21st century France, a country buffeted by social inequality, restive suburbs and racial tensions.

Gérard Araud, France’s former ambassador to Washington, known for throwing fabulous parties that would make Emily swoon, said he wasn’t watching the series and his circle appeared to be studiously avoiding it. “In France, it has the reputation of being a typically American mixture of clichés and of schmaltz,” he wrote in an email. “Clichés about us don’t interest us, and the French are not very schmaltzy.”

Bernard-Henri Lévy, France’s most famous public intellectual, also appears intent on not devoting any gray matter to the series. “I didn’t even think of looking at the show,” he said through a spokesperson.

Nevertheless, Leffler, the former consultant for the series, said that Season 3 got some things right, including by having French characters speak more French among themselves. The show also, she said, accurately captured the French philosophy that it is beneficial for people not to work all the time. In 2017, France passed a provision in the labor law offering the right to disconnect by, in some cases, limiting the need for employees to reply to emails after work.

And while some fashionistas have blasted “Emily in Paris” for ignoring the famous maxim attributed to Coco Chanel, “Before you leave the house, look in the mirror and take one thing off,” the series has won fans among leading designers.

“I don’t know anybody in Paris who dresses like ‘Emily in Paris’ or any 20-something woman who wears Schiaparelli to get her croissant in the morning,” said Christian Juul Nielsen, the creative director of Hervé Léger, who worked close to a decade in Paris as a designer for Christian Dior. “I wish I did!”

The real-life Emilys said, however, that the show’s portrayal of Paris with the grit scrubbed off made them appreciate the real Paris more. Emily also gave them someone to look down on, given that it often seemed as if Frenchwomen could out-cook, out-charm and out-dress them.

In one sense, at least, Leffler acknowledged she was trying harder to embrace her inner Emily. “I used to want everyone to like me, but the French don’t care if you like them,” she said. “I’m from New Jersey and now I own it.”