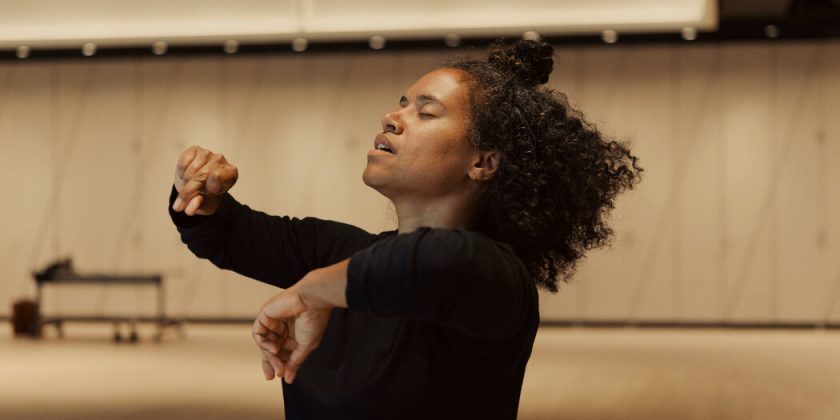 Leslie Cuyjet has performed with dozens of contemporary choreographers over the years, but she’s still something of a mystery. Her subtle, strong presence unassumingly grounds the stage. She has a way of revealing and receding.

But the layers are being peeled back: Lately, Cuyjet, 40, has unveiled a potent choreographic voice, excavating the solo form through video, writing and, of course, the dancing body.

“Blur,” a solo that looks at objectification and race, is set to debut on Friday at the Shed as part of its Open Call series. Cuyjet (pronounced SOO-zhay) also has a video piece, “For All Your Life Studies,” in an exhibition called “In Practice: You may go, but this will bring you back,” at SculptureCenter in Long Island City. Looking ahead, she’ll appear live on June 13 as part of the Performance Mix Festival in Manhattan and offer a virtual presentation on July 11 for the Center for Performance Research.

Earlier in May, as part of the Kitchen’s Dance and Process series, she presented “With Marion,” an elegant, complex look at identity partly inspired by Marion Cuyjet, her great-aunt, a pioneering teacher of Black ballet dancers who formed the Judimar School of Dance in Philadelphia in 1948.

“With Marion” seems to sum up Cuyjet’s approach as a choreographer, which is to bring the past into the present through writing and movement, as well as to surround herself with intimate artifacts. In this labyrinthine work of video, text and movement, she brought the image of her pandemic studio — a desk — into the space (Queenslab in Ridgewood, Queens), and operated a complex system of projections that included a photograph of her great-aunt.

It’s a feat to pull off something so conceptual and personal; Moriah Evans and Yve Laris Cohen — who curate Dance and Process, an incubator that affords choreographers the space and time to develop work — were impressed. Evans said she admired the nuances of seemingly simple gestures in the piece, as well as its “delicate shifts,” which “contain all the complexity that I think is within Leslie as a person and as a performer: the subtlety, the control, but also the anger, the rage, the freedom.” 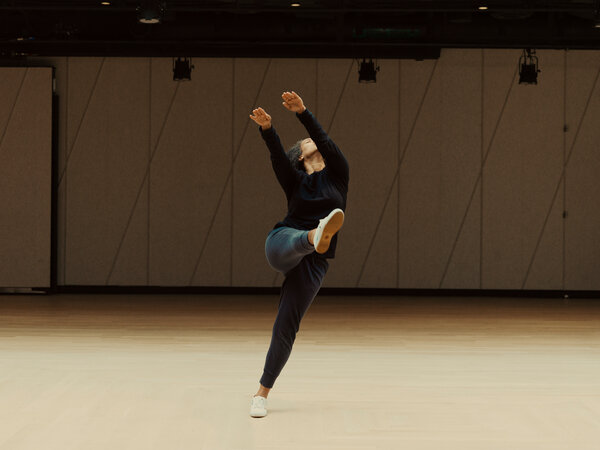 Cuyjet’s dance lineage and her experience growing up in a middle-class Black family are complicated for her. In “With Marion,” she said she was looking at the privilege afforded by light skin. Marion “started teaching because she was kicked out of the corps in a ballet company when they found out that she was Black,” she said. “But before that, she had been successfully passing.”

Cuyjet didn’t know her great-aunt well. “When I started really getting into dance — I was maybe a preteen or a teenager — someone at a family reunion was just like, ‘You know that she’s a dancer,’” Cujyet said. “I thought she was this untouchable character. There’s something bigger brewing about celebrating her and her life and her legacy; this piece for the Kitchen felt like a start.”

As she digs deeper into how her identity both shapes and is shaped by the world, Cuyjet seems to be the kind of choreographer whose works, once unleashed, will continue to grow and morph. In the video “Life Studies,” she explores a favorite topic: Black bodies and water. Her younger self is shown swimming in a competition as well as simply basking by the pool. The children’s laughter you hear alongside splashing water is infectious, a familiar song of summer.

“That was just an expression of the privileges that I had growing up,” Cuyjet said. “I have all these home videos of us swimming in competition and enjoyment, and that’s the makeup of this piece.”

Over the years, Cuyjet has danced for many choreographers, including Kim Brandt, Jane Comfort, Niall Jones, Juliana F. May and Cynthia Oliver, her mentor. She loves to be in a process of collaboration. “Years and years of my work is embedded in Jane Comfort’s work,” she said. But “I started asking questions like, ‘What is my work going to be?’”

It then became clear to her, she said. She wanted to be the one in charge.

Cuyjet has also become more vocal on another topic: In a joint interview in March with another Black choreographer — “Leslie Cuyjet and Angie Pittman are not the same dancer” — she talks about the “shared experience of what it’s like to be the black dot on the white stage.”

Recently, Cuyjet spoke about some of her projects and practices, which weave together her life and her art. What follows are edited excerpts from that conversation.

How did “With Marion” develop?

It was completely shaped by the pandemic. I really started picking up writing to make sense of what was happening and to catalog this momentous occasion in our lifetime. I created a photograph: a collaged image of items and objects that were on and around my desk.

And that includes an image of Marion, which shows up in the work. What kind of comfort did having her so close to you during the pandemic bring?

But that is changing. Why?

In the summer, with the movement for Black lives, I felt myself just sort of shoved in front of a microphone. And it felt really uncomfortable for me to feel like it was earned or deserved. And I think when I look to Marion — and I looked at everything that she went through for me to have this place where I am in this privilege — I feel like I have to take some of these opportunities. Now it feels like I can talk about nuance and I can talk about how my experience might be different than other Black artists.

How do you see your self as a Black woman in the contemporary dance scene?

I recently had a conversation with Angie Pittman [for Critical Correspondence, the online publication of Movement Research]. It was so monumental to talk about how, basically, we’re interchangeable. We are rarely cast in the same pieces.

This experience of being fluent in so many different dance languages and so many different postmodern and experimental forms is that it’s hard to decipher whether you are there for your virtuosity and knowledge or to check a box on somebody’s grant application. I want to feel like I’ve earned everything that I have, and I work really hard and I work all the time.

For years. It’s really isolating to be typecast. I don’t know if that’s the right word, but then there’s the other side of that, where it’s like, “Oh you’re Black, so you can give me these things.”

I want to feel free to let my freak flag fly a little bit, instead of being contained into “this is what Black art is.” And I’m definitely calling my work “Black art,” but sometimes I feel like that’s been challenged and I’ve had to defend it, and it’s just like, why? Why do I have to do this?

What is the background of your SculptureCenter video?

The piece grew out of research for a life-insurance project. My great-grandfather was the president of a Black-owned life-insurance company and was able to give my dad’s side of the family mobility and property and all these things. My mom’s first job was at the insurance company. So it really sort of secured a middle class-ness of both sides of my family.

How else has your family influenced your work?

I remember my parents [who grew up on the South Side of Chicago] telling me a childhood friend of theirs wrote this book about the way they were brought up, and it was Margo Jefferson’s “Negroland.” And I was like, Margo Jefferson was your friend? They sent me a copy and I read it, and I was floored. I changed the whole trajectory of my work. [Laughs]

Her memoir is about being a member of Chicago’s Black elite. Do you have a sense of privilege that is uncomfortable for you?

Absolutely. And it’s hard to acknowledge. And it’s so complicated when people are like: “No, but you have so much oppression. So it’s OK.” [Laughs] But this book and the way that Margo spells it out about being raised this way — it made a lot of sense to me. It’s making me understand my place in the world.