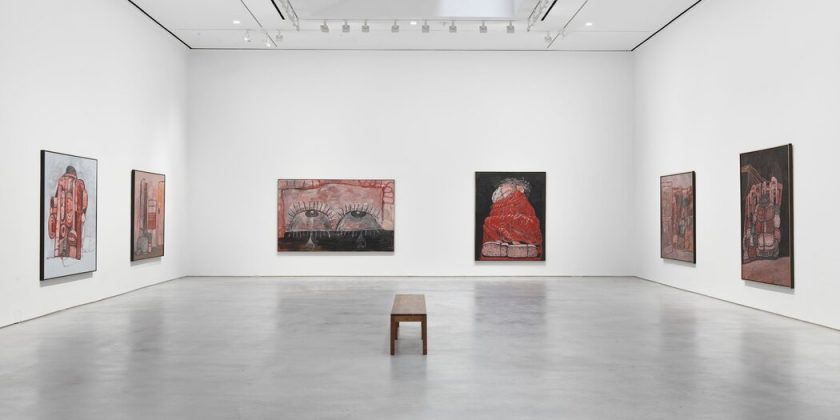 Hauser & Wirth, the gallery that has represented the estate of Philip Guston since 2015, has leapt unto the breach. In lieu of “Philip Guston Now,” the enormous, widely anticipated retrospective set to tour to four museums on both sides of the Atlantic that was abruptly postponed last September, Hauser & Wirth has mounted a powerful exhibition of 18 of the late paintings that are the crowning achievement of Abstract Expressionism’s greatest apostate.

The new show, “Philip Guston, 1969-1979” — organized with cooperation from the Guston Foundation — is divided between two galleries: six paintings from 1969-70 featuring the white-hooded creatures that recall the Ku Klux Klan, and partly caused the postponement; a dozen others from 1973-79, when Guston himself — seen mostly in the studio or lying in bed, usually in comical existential crisis — becomes the main protagonist.

The four prominent organizing museums of the postponed retrospective — the National Gallery of Art, the Museum of Fine Arts, Houston, the Tate Modern in London and the Museum of Fine Arts, Boston — decided that the artist’s depictions of the white-hooded Klan figures — Social Realist in Guston’s early work, cartoonish in his late — had not been sufficiently explicated and might be “misinterpreted.” (This suggests that there are right and wrong interpretations — there aren’t, just more or less convincing ones.) Further work was required, at least for label-writing and programming, it seemed, although the catalog was already in bookstores.

An understandable backlash ensued. Over 2,000 artists, art historians and critics who signed a petition of protest were offended by the museums’ cowardice and lack of faith in their viewers’ ability to look and think for themselves. At first, the show was postponed until sometime in 2024, but a few weeks later, it was shifted back two years. It will now open May 1, 2022, at the Museum of Fine Arts, Boston.

Images of Klansmen more or less bracketed Guston’s restless development; he was ever on the move, feeling his way toward a new phase, or briefly pausing in one before his work started mutating again. The early Social Realist paintings borrowed from Giorgio de Chirico’s haunted plazas and the commanding figuration of the Renaissance for its robed and hooded thugs, who were big, muscular and threatening. At the time, Guston was living in Los Angeles and just entering adulthood; the Klan was active in Southern California and he was sensitive to the recurring horrors whose roots lay in American’s original sin, the enslavement of people abducted from Africa. At least some of these early images may qualify as “toxic,” as the museums claimed; they could have been sequestered in their own gallery with a warning sign.

But the exhibition at Hauser & Wirth samples only work from Guston’s frenzied last phase, which began in 1968-69, when the hoods returned, and extended to 1980, the year of his death. The paintings here have a slightly tighter span — from 1969 to 1979 — and are arrayed in two galleries.

It begins with an amazing sight: six of the paintings from Guston’s groundbreaking 1970 show at Marlborough with which he unveiled his abandonment of abstraction and more or less scandalized the New York art world. Some of these works have not been seen in New York since then, including the lushly painted 1969 “Blackboard,” in which three hoods appear on one as if drawn in chalk, surrounded by a wall of many pinks that may hold your attention. Guston had arrived at them after a 15-year detour through Abstract Expressionism, during which he rid his art of its academicism and discovered paint as material and his own way of handling it. The new hoods were rendered in visibly vigorous brushwork, indebted to de Kooning’s, and tweaked by the jubilant drawing style and roly-poly forms of the great cartoonist George Herriman (1880-1944), creator of the undying “Krazy Kat” comic.

Depicted mostly as conical forms that occasionally have shoulders and thick mitt-like hands, the new hoods seemed disembodied and neutered. They are basically rumpled triangles with slotted eyes that convey a perpetual look of dopey surprise as they drive around town in toylike jalopies, paint self-portraits and talk among themselves. And they are more bumbling than threatening, even in the 1970 “Scared Stiff,” when we see a hood spotted with red (blood), facing a big accusatory red hand while sweating bullets.

The late hoods seem infantilized, moronic. They ridicule America’s entire deeply troubled history, stunted by toxic prejudice, not only racism but xenophobia and misogyny and, now, defiant ignorance, a country that has never realized that it is, itself, a victim of its own profuse and unexamined biases and phobias.

The dozen paintings in the second gallery lack hoods. They careen back and forth between the human condition in general and Guston’s in particular. Three paintings of stacks and piles of hairy legs with boxy shoes suggest invasions, mass arrests, the Holocaust or a crowded vaudeville act, in a hurry and quite out of step. Least familiar is “Entrance,” where the legs crowd toward a cloud of bravura brushwork that, outlined in red, serves as a door. “Studio in a Small Town,” exhibited for the first time, points toward the artist with its title and shows an interior occupied by two towering, seemingly mismatched boots, standing at attention.

Otherwise, Guston himself unmistakably takes center stage, his bulbous potato — or lima-bean — head seen mostly in profile, with one large glaring eye and, often, a comb-over. The hair is in disarray in “Sleeping,” where he huddles under a bright red blanket, his signature boxy shoes sticking out, seen in steep foreshortening that haphazardly conjures Andrea Mantegna’s “Dead Christ.” Guston’s long-suffering wife, the poet Musa McKim Guston, appears in “Tears” as two enormous eyes on a proscenium stage, each orb forming a round little seascape and producing one teardrop.

These paintings have their amusing aspects as images; their enthralling, startling qualities as fields of manipulated paint; and their painful auras as ridiculous yet heart-rending pictures of the hell that is being an artist, or maybe just the hell that was being Philip Guston. We get a sense of how difficult it could be to be around this man who seemed only to think or talk of himself and his work and who, essentially, indulged and worked himself to death. He was a chain-smoking, near-alcoholic insomniac who ignored most medical advice as long as he could, until he had a massive heart attack in early spring 1979 and then, in June 1980, a second one that killed him instantly. In “Pittore” he lies in bed, smoking and watching the clock, his paints and paintbrush waiting by his side. It’s a life study of the artist as a driven man.

In “Back View II,” Guston takes his leave wearing a bulky overcoat, disappearing over the horizon like an armored vehicle. He is laden with more legs and shoes and arms holding garbage-can lids, like the ones that kids used as shields in the make-believe battles of his childhood, and that made their way into his conflict-ridden paintings, both early and late.

The 18 paintings here are so rich and demanding, so challenging yet absorbing, that the prospect of a full-dress Guston retrospective can seem almost daunting. They are fully operational, uniting the political, painterly, psychological and societal into indissoluble visual entities that few painters achieve. They invite many interpretations and are likely to outlive the achievements of many of his contemporaries.