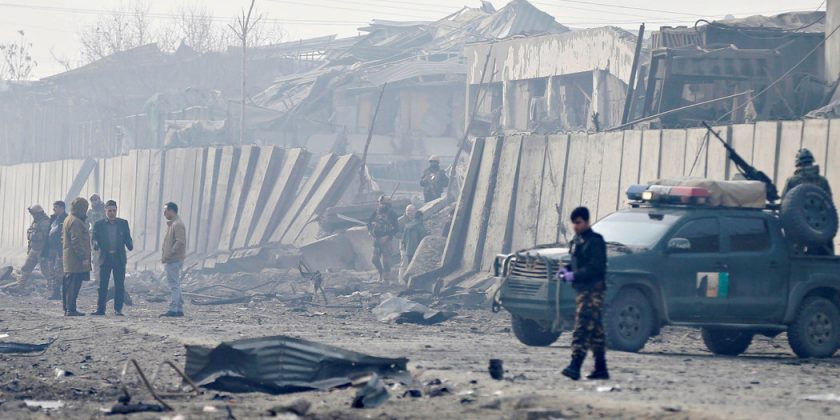 At least 62 pro-government forces and three civilians were killed in Afghanistan during the past week. Casualties among pro-government forces saw a significant drop compared to the previous two weeks, but remain high for this time of year when freezing temperatures historically have curtailed Taliban attacks. In Kabul, there were two bombings within two days of each other; the first left at least 22 people dead and 120 wounded; the breakdown of casualties between security forces and civilians was not available. The second bombing killed one N.D.S. official.

Afghan forces launched an operation against the Taliban in Shinwari District. The district police chief was killed and two police officers were wounded in the fighting.

The Taliban ambushed an Afghan security convoy in Khwaja Sabz Posh District, killing four police officers and wounding two others. The convoy was driving from Balkh to Faryab.

An I.E.D. attached to a civilian vehicle exploded in Kabul City, killing one N.D.S. official.

A car bomb exploded in Kabul, killing 22 people and wounding 120 more. Officials claimed only four people were killed, three of whom were Afghan security officials, and 113 others were wounded.

[Deadly Bombing in Afghan Capital Is Claimed by Taliban]

The Taliban attacked a convoy of Afghan border police close to Qala-i-Naw, killing four and wounding two. The incident took place 31 miles from Badghis City. Afghan officials claimed five members of the Taliban were also were killed and five were wounded.

The Taliban attacked a police checkpoint in the Rabat area of Spin Boldak District, killing five police officers and wounding two others. The insurgents were unable to capture the post and the Taliban was forced from the area. An official claimed that seven Taliban were killed and six were wounded.

The Taliban attacked an outpost in Faizabad District, killing six pro-government militia members. The outpost was captured by the Taliban after three hours of fighting.