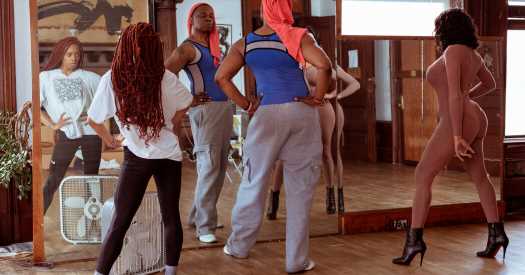 When Archie Burnett walks onto a dance floor, he tends to take it over.

That’s partly because he’s a big guy, 6 foot 4 and full of muscle. Especially in the 1980s and ’90s, when he was a mainstay of New York City’s underground clubs, his body was, as he recently put it, “banging.”

A body like that commands attention, but any chance of fading into the background truly disappears when he starts to move. Then he’s a kaleidoscope of long lines and sharp angles. Every moment, he’s ready for a camera to click; every moment, he’s on beat.

His dancing is also knowledge in action. Vogue and waacking, resurgent in popular culture, may be new to some, but not to Burnett. He’s a father of the House of Ninja, a collective of dancers instrumental in the spread of vogueing from ballrooms to videos and fashion shows in the ’80s and ’90s. With Tyrone Proctor, a pioneer of waacking who happened to be Burnett’s brother-in-law, he helped revive that style of flamboyant, air-slicing improvisation, developed in Los Angeles gay clubs in the 1970s. House dance is home territory, too.

A Burnett dance-floor takeover, though, is never hostile. The choreographer David Neumann remembers going to clubs with him in the ’90s. “People would want to battle him,” Neumann said. “But Archie would immediately disarm the person — screaming, slapping the floor, praising them.”

“That’s his attitude,” Neumann continued. “If you are really in the dance, you get props. Now, eventually, he’ll likely beat you, but that’s not his goal. His goal is the joy of dancing.”

Sally Sommer, a critic and historian who followed Burnett to clubs in the ’80s and put him at the center of her ’90s-club-dance documentary, “Check Your Body at the Door,” similarly described Burnett’s attitude in an interview: “It’s about enlarging the circles of pleasure.”

At 62, Burnett is still enlarging those circles — in clubs but also in classrooms. Since the ’90s, as demand for instruction in underground club styles has grown all around the world and especially in Europe, he has become one of the most revered and influential teachers. (“The most significant disseminator,” Sommer said.) Younger dancers lovingly describe him as a fairy godfather, a cool uncle or the best dad ever, as a friend who makes you want to dance even if your feet hurt.

From July 28 to Aug. 1, his teaching takes a new form: “Life Encounters,” a show at the Jacob’s Pillow Dance Festival in the Berkshires. In it, Burnett and an intergenerational cast of dancers tell the story of his life in dance. (Video of the production will be available on the Jacob’s Pillow website Aug. 12-26.)

They tell that story through dance, with vignettes of Burnett’s high school days, his initiation into underground clubs and vogueing, his first encounter with Europe and experimental dance. These are all scenes of discovery, in which he typically portrays himself as a novice. There’s a lot of humor.

Burnett is at the center, dancing and narrating. His voice is as big as the rest of him, and he’s accustomed to holding forth. Ask him almost any question these days, and his answer is likely to include the phrase “What I tell the kids is …” or one of what he calls his “sayings,” like “you can’t fake the real” and “the club is the classroom.”

The club was his classroom. He had almost no formal training. At first, he cribbed moves off “Soul Train.” Up until 2014, he had a day job with Metropolitan Transportation Authority. (In “Check Your Body,” you can see him washing out subway cars.) Dancing, for him, has been more passion than profession.

Speaking after a recent rehearsal, Burnett said the most important experience of his life started in 1980, when he began dancing at the Loft, the underground party celebrated for its mixed crowd of dance devotees and its spirit of acceptance. “The Loft was a come-as-you-are party,” he said. “It allowed me a nurturing ground to be who I was, even when I didn’t know who I was.”

When Burnett was growing up in Brooklyn, dancing was something he had to do on the sly. His mother, a Seventh Day Adventist from Dominica, didn’t approve. “I wasn’t doing drugs, I wasn’t killing anybody, but she had an issue because I like to shake my ass to a beat?” Burnett said. “She told me I was going to go to Hell, that I should go to God. But dance is like a religion for me. It’s where I feel closest to my spiritual plane.”

His mother wanted him to be a preacher, and in a sense, she may have gotten her wish. Burnett preaches the gospel of the Loft, which is a gospel of love. The message of “Life Encounters” is the message of all his classes: “Live your truth” and “you are good enough.”

There’s not much sadness in the show, though there has been in Burnett’s life. “When AIDS hit the scene, my friends were dropping like flies,” he said. Willi Ninja, who founded the House of Ninja and became famous after appearing in the 1990 documentary “Paris Is Burning,” died of AIDS-related heart failure in 2006. Burnett was his health care proxy. “I had to pull the plug after he went into cardiac arrest,” he said. “Those experiences shaped my idea of friendship and family. I try to spread that love through dance.”

It’s not that Burnett doesn’t teach movement. He tries to teach his students as he learned. “These kids were never raised in club culture,” he said. “They’re seeing it from the outside. But this stuff comes from the inside out. I try to make it as if we’re at a party and I’m inviting them to do what I do” — a mirroring that connects them to the music and to their own responses.

For the cast of “Life Encounters,” rehearsals have been a continuing master class. “Archie is a history bearer and he’s always dropping gems,” said Abdiel Jacobsen, who used to be a member of the Martha Graham Dance Company (and who uses the pronoun “they”). A few years ago, looking for ways to more fully express a gender-fluid identity, Jacobsen discovered encouragement and welcome in Burnett’s vogue and waacking classes. Now a devotee of the Hustle, they do that partner dance with Burnett in the show.

Sinia Alaia (who also goes by Sinia Braxton, Nia Reid and other names) met Burnett about seven years ago, when they were both teaching in Sweden. A recognized diva in the vogue ballroom scene — in “Life Encounters,” she schools the others in sass — she was then in her late 30s and had not been performing and feared doing an instructor demonstration. “But Archie told me, ‘You got this, girl,’ and he breathed that life into me,” Reid said. “It’s when you stop dancing that you feel the aches and pains.”

Getting older hasn’t been easy for Burnett. “I’m my own worst critic,” he said. “If I think of all the abilities I had when I was 20, I’d go insane. But I tried to stop worrying about what I didn’t have and remember what I did.”

What he has are relationships. The cast of “Life Encounters,” he said, is like a “family love affair.” Maya Llanos is the daughter of the D.J. Joey Llanos, a friend of Burnett’s from the Paradise Garage days. Samara Cohen, better known as Princess Lockeroo, is the foremost protégé of Proctor (who died last year). DeAndre Brown (Yummy in the ballroom) was once part of the House of Ninja. Burnett met Ephrat Asherie on the dance floor. “I’ve danced with that girl for 20 years,” he said.

And what he has is knowledge. The playwright Marcella Murray, who serves as dramaturge for “Life Encounters” along with Neumann, said that in doing research for this show, “Archie is the research, this amazing font.”

But it’s not just Burnett’s knowledge about dance that impressed Murray. “We have been having conversations in the arts about how we treat each other,” she said. “It’s been wonderful to see how Archie has moved through the world, and how people want to show up for him.”

“Because we’re all trying to be like that,” she continued, “not just making brilliant art, but being good people who make art. That’s my favorite reason for being glad that people are going to get to see more of Archie.”