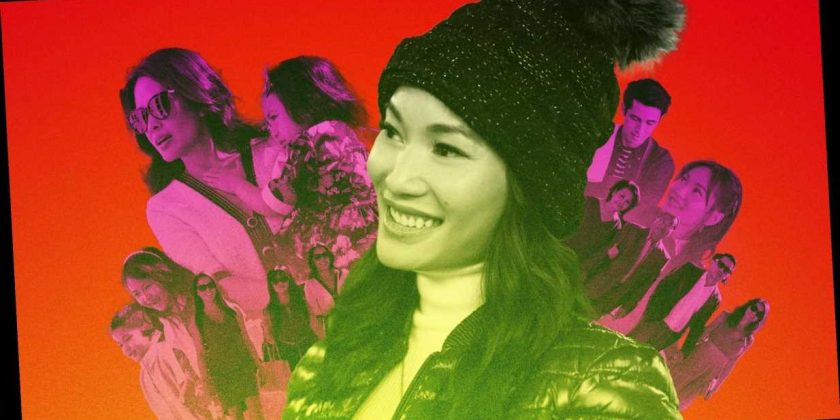 Every year, the Lifetime/Hallmark/Netflix holiday rom-com industrial complex churns out dozens of movies that follow a plot resembling this: Sad Career Woman™ goes back to her small, snowy hometown somewhere in New England (but really, some fake snow plopped on a soundstage in LA), realizes her life is unfulfilled, rediscovers the spirit of Christmas and reconnects with an old high school flame, creating some will-they-won’t-they intrigue.

That’s the general gist of Lifetime’s “A Sugar & Spice Holiday.” In this case, the Sad Career Woman™ is an architect juggling her family’s holiday festivities with a project that will determine whether she gets a promotion, which inexplicably has a Christmas Eve deadline. Sprinkle in some other tropes of the genre: For example, she joins a team competing in the town’s annual baking contest, wanting to honor the memory of her late grandmother, a frequent winner of the contest.

And in a first for Lifetime, she and her family happen to be Chinese American, part of a better-late-than-never trend of the holiday rom-com genre providing more on-screen representation.

Asian Americans are especially underrepresented in the comedy and reality genres, according to a new report from media research giant Nielsen on who gets represented on TV. This week brings a new release in each genre, both of which thread the needle of being culturally specific but not making the characters’ identity the central plot point. Like “A Sugar & Spice Holiday,” in HBO Max’s new reality series, “House of Ho,” which follows a wealthy Vietnamese American family in Houston, the family’s heritage is just one part of the show, which otherwise reproduces common elements of reality TV.

Both are also decidedly mediocre … and that’s OK. Their flaws are to be expected because they follow the conventions of two easily reproducible genres. While inserting some culturally specific details, they mostly regurgitate elements of each genre’s formula. Yet, whether it’s a messy reality show or an anodyne holiday rom-com, every new show or movie means there’s a little less weight placed on each show or movie about Asian Americans to succeed. And it means there’s a little less of the absurd expectation that each show or movie needs to somehow represent an entire, extremely diverse racial group — because of course it can’t.

“A Sugar & Spice Holiday” doesn’t pander to viewers or feel cringeworthy or overly performative, in part because it sticks to the classics of the genre. These made-for-TV movies reproduce a bland, monochromatic aesthetic and aspire toward some vaguely WASP-y ideal, even when they attempt to be more diverse, as my colleague Emma Gray wrote earlier this week. 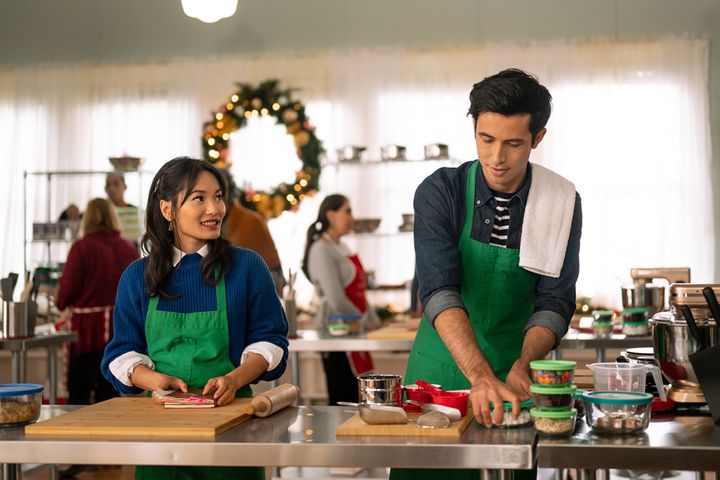 Perhaps watching “A Sugar & Spice Holiday” is disappointing if you expected something better. But it’s a made-for-TV holiday rom-com. It’s like one of those generic, boxed greeting cards: Yes, it’s mediocre and highly commercialized, but it can still be pleasant to receive one.

“House of Ho” begins as many reality shows about large, raucous families do. We meet the Hos, who are full of outsized personalities and, of course, lots of drama — whether it’s real or contrived for the cameras. Some of the developments are culturally specific, but others follow the familiar rhythms of reality TV.

Binh and Hue Ho came to the U.S. as refugees in the 1970s, beginning an archetypal, rags-to-riches tale, eventually accumulating wealth through banking and real estate.

There are a lot of tensions between them and their adult children that spill out onto the screen. Some of the Hos’ conflicts stem from the model minority trope, the weight of expectations placed on the children of immigrants, and the divergent upbringings and values between them and their immigrant parents. Binh and Hue reinforce a slew of conservative, patriarchal and sexist values, like prioritizing their sons over their daughter and seeing a woman’s role mainly as a caretaker and peacemaker.

Case in point: oldest child Judy points out that her brothers are named after presidents: Washington (the heir to dad Binh’s business) and Reagan (the youngest, and who only makes a brief appearance for reasons that are explained later in the show). She, on the other hand, was deemed a disappointment because she was a girl, so they went with Judy. 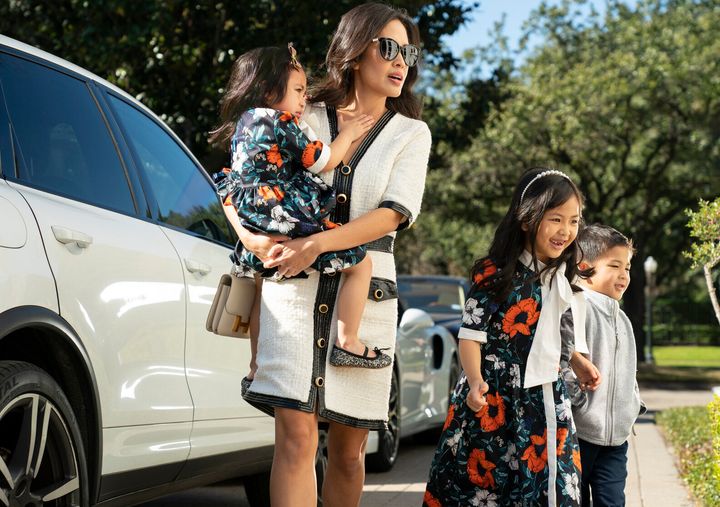 At the start of the series, Judy announces to the family that she and her husband are getting a divorce. Her parents, traditional Catholics, disapprove and blame her for the split and accuse her of not prioritizing her children. Later, when things start to get serious between Judy and her new boyfriend, Judy, a 39-year-old adult, is supposed to seek the approval of both her father and her younger brother.

Meanwhile, Washington’s reckless spending and excessive drinking have strained his marriage to wife Lesley. Lesley is contending with high expectations from her in-laws, who blame her for her manchild husband’s problems. They simultaneously put undue pressure on her to fix them and suggest she loosen up a bit. As Judy frequently points out, their parents give Washington a pass for his mistakes and set the bar lower for him.

Washington, who has adopted some of the same patriarchal attitudes as his father, whines that Judy’s divorce has been bad for him and his relationship, even though he should maybe demonstrate some empathy for his older sister.

Behind the scenes, Binh — who seems to view a lot of interactions with his children as purely transactional — pulls a Logan Roy-esque move. Initially, he plans to announce his retirement and turn over the family business to Washington. But he reverses course, deeming Washington too immature and not ready for prime time and criticizing Judy for not having enough “stability” in her life — and then only tells Lesley about his change of plans.

To its credit, the show does address topics a lot of Asian cultures and communities tend to avoid, such as divorce, depression and substance abuse. But there’s only so much a glossy, soapy reality series can address, and as the episodes go on, the Hos become more and more exhausting to watch. I bristled when someone would try to provide context to someone else’s behavior by explaining “this is the Asian way” or “this is part of Asian culture.” Some of that is true. But every family has problems particular to themselves, and reality shows mine those problems for maximum drama and suspense. 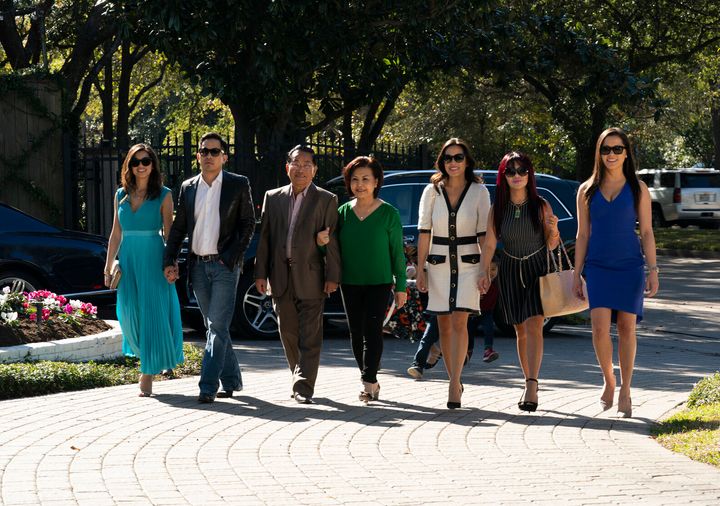 It wouldn’t be a reality show without a lot of messy drama. Another member of the Hos, Aunt Tina, Binh’s younger sister, embodies another trope of reality TV: the gossipy party animal who bluntly states what everyone else won’t say.

In most shows like these, there’s at least something redeeming or even endearing about the family members that keeps viewers invested in them. Here, it’s all a bit too much. The adult children appear to be heavily dependent on their dad’s wealth, which makes breaking free from his domineering ways difficult. It also makes their complaints sound entitled and grating.

Everyone in the family has so much unprocessed pain and intergenerational trauma. I found myself hoping they all can get some serious therapy and really talk about everything — ideally without the cameras rolling.

There’s nothing particularly distinctive about either “House of Ho” and “A Sugar & Spice Holiday” because they are two prototypical additions to two very broad television categories. But lots of shows and movies are just OK, especially when they’re in two of the most mass-produced genres. There will surely be more variations of them in the future — and the more, the merrier.

As an Asian person, dare I say: It’s kind of nice to be expected to just be mediocre.

“A Sugar & Spice Holiday” premieres Sunday at 8 p.m. ET on Lifetime. “House of Ho” is now streaming on HBO Max.