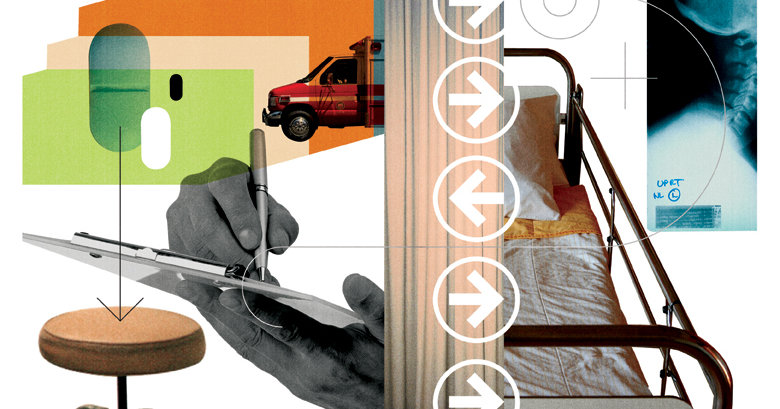 I recently cared for a hairdresser who had gone through a year of vague and varied symptoms. What started as a few unpleasant aches soon became debilitating pain throughout her body. A heavy fatigue settled into her bones: Holding scissors or sweeping the floor became too much. She slept fitfully; her memory flagged. Frustrated by many symptoms and few answers, she grew anxious and depressed.

Our medical team, after a battery of unrevealing tests, settled on a diagnosis of fibromyalgia. Tears welled in her eyes as I explained the diagnosis, and I worried I’d been too brusque. But these were tears of relief, she said, not because the symptoms had ceased, but because she finally had an answer, a name for her pain.

Those who suffer without a clear understanding of its cause experience a unique form of torment. There is great power in diagnosis: It can be comforting, terrifying, and sometimes, even healing.

There’s evidence, for example, that patients who receive a new diagnosis of fibromyalgia — for which there is limited treatment — may have fewer symptoms, be more satisfied with their health, and possibly incur lower costs.

But fibromyalgia wasn’t a recognized diagnosis 30 years ago. Nor were many other now-common diagnoses that have only recently been recognized and treated as medical conditions.

Since the 1980s, there’s been rapid expansion in the number and complexity of medical diagnoses — a trend known as “medicalization.” A recent study found that the cost of 12 newly medicalized conditions — things like irritable bowel syndrome, post-traumatic stress disorder, low testosterone, attention deficit hyperactivity disorder — now approaches $80 billion a year, or about 4 percent of total health care spending. That’s about as much as we spend on heart disease or cancer, and more than we spend on public health initiatives.

Our ever-expanding armamentarium of diagnoses no doubt offers comfort, attention and a path to treatment for many previously undiagnosed — and undiagnosable — patients. But we may also be medicalizing much of normal human behavior — labeling the healthy as diseased, and exposing them to undue risk of stigma, testing and treatment.

Trouble sleeping is now insomnia. Shyness is social phobia. Grief is depression. Infidelity is sex addiction. It’s not that these diseases don’t exist — the spectrum of human behavior is broad, and the extremes do represent real pathology — but we may be drawing lines in the wrong places, with negative health and financial consequences.

This is perhaps most concerning for children. About 12 percent of children in America now carry a diagnosis of A.D.H.D, and there was a 40-fold increase in childhood bipolar disorder diagnoses between 1994 and 2003. Five times as many children are now prescribed psychostimulant and antipsychotic medications as were in the 1980s. Today, a quarter of children and teenagers take prescription drugs regularly, and seven percent of older adolescents and young adults report abusing opioids — most of whom were initially prescribed them by a doctor.

With millions of Americans taking risky medications for questionable diagnoses, have we medicalized everyday life?

There’s no shortage of factors that have gotten us here. The pharmaceutical industry, for instance, has taken an active, sometimes dubious, role in defining and promoting new diagnoses, through direct-to-consumer advertising and physician outreach efforts.

Often overlooked, however, are how the psychologies of doctors and patients contribute. Clinical encounters that don’t end with a definitive diagnosis — a clear acknowledgment of the enemy — are inherently unsatisfying. Doctors, through their training and mandate, are motivated to package a constellation of symptoms into something that can be understood, named and treated.

At the same time, we have both a growing arsenal of medications to fix patients’ problems and a steadily shrinking number of minutes in which to do so. Not surprisingly, the path of least resistance becomes labeling and prescribing instead of exploring and managing.

Patients are motivated by the understandable desire to name and ease their suffering — and today, many more patients have that opportunity. But it also means that much of normal human experience is treated with prescriptions instead of patience. This is perhaps not surprising. We increasingly have easy solutions at our fingertips: Dial-up modems have given way to broadband; stores are being replaced by Amazon drones; courtship is now Tinder. Is it wrong for patients to expect quick fixes from medicine?

An important step forward may be putting more emphasis on nonprescription remedies. For many medicalized conditions, lifestyle changes are often just as effective as medications, if not more so (and don’t come with side effects).

Patients and doctors should also regularly revisit whether a given diagnosis still applies over time. Many patients diagnosed with depression, asthma, acid reflux or insomnia may not meet criteria for these conditions when reassessed, but they often continue taking medications even after symptoms have resolved.

More fundamentally, we need to reconsider where the upper and lower bounds of diagnosis should be. Many experts believe the pendulum has swung too far, such that much of normal human behavior now falls within treatment thresholds. This reassessment is particularly important because those with mild or borderline symptoms may be less likely to benefit from treatment than those with more severe symptoms.

Diagnosis is complicated. It can be a path to acceptance and treatment, or a road to risk and stigma. More diagnoses mean more patients can heal but also that more might suffer. Figuring out who will be helped — and who will harmed — might be the most important diagnosis we make.

Dhruv Khullar, M.D., M.P.P. (@DhruvKhullar) is a physician at NewYork-Presbyterian Hospital, an assistant professor in the departments of medicine and health care policy at Weill Cornell, and director of policy dissemination at the Physicians Foundation Center for Physician Practice and Leadership.