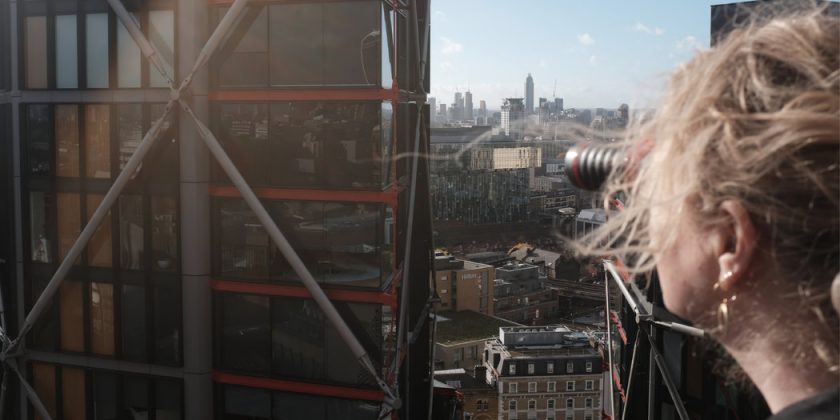 LONDON — Just after 10 a.m. on Saturday, Daniel Huchard, 53, a French ski instructor visiting Tate Modern in London, stood on the 10th-story viewing terrace and admired one of the gallery’s more unusual sights: the apartments opposite.

In one, a middle-age man wearing a gray T-shirt and shorts could be seen through the floor-to-ceiling windows eating breakfast. It appeared to be a slice of toast.

In another, a different middle-age man sat on a green sofa, a weekend newspaper sprawled around him.

There were no signs of life in the many other apartments, some of which are only around 60 feet from the viewing terrace.

“They’re very nice flats — a lot of light, very expensive probably,” Mr. Huchard said. But he would not live in one, he added, even if he had a spare $4.5 million, the asking price of an apartment currently on sale.

“They are like animals in a zoo,” he said.

Tate Modern’s viewing terrace has been popular since it opened as part of the gallery’s extension in 2016. It offers one of London’s best views, taking in St. Paul’s Cathedral; the Leadenhall Building, a skyscraper better known as the Cheesegrater for its distinctive appearance; the Houses of Parliament; and a swath of South London. Visitors take hundreds of selfies every day. 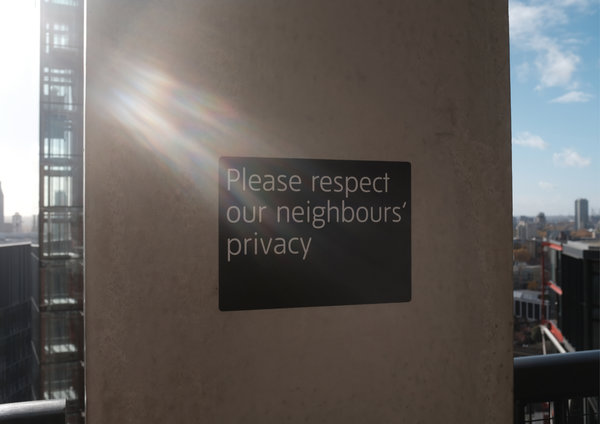 But the ability to walk around one side of the terrace and peek into the apartments is being challenged.

In 2017, four apartment owners in the buildings, part of a development called Neo Bankside, sued Tate, the organization that runs Tate Modern and other museums in Britain, for what they claim is the “relentless” invasion of privacy from visitors to the terrace. The viewing platform stops the apartments being “a secure home for young children” because of the onlookers, they said in court papers.

In response, the gallery pointed out that plans for the construction of the platform were public knowledge when the apartments were sold. The gallery received its original planning permission for its development before the apartments, it added.

At a news conference in September 2016, Nicholas Serota, then Tate’s director, said that there was a simple answer to the problem: Hang curtains. But Tate’s arguments did not stop the case. This month, it reached the High Court. A judgment is expected soon.

Appropriately, the case has prompted an artwork. This month, Max Siedentopf, a conceptual artist, tied 10 pairs of binoculars to the terrace opposite the apartments for people to use. He called the unauthorized intervention “Please Respect Our Neighbors’ Privacy,” the same message that appears on signs in Tate Modern.

But he also just wanted to make people laugh, and highlight an uncomfortable fact for Tate: “I think the funny part of the story is that the neighbors’ apartments are actually more popular than any work on display,” he said. Sometimes the gawking crowd “almost resembles photos you see at the Louvre where hundreds of people gather to look at the Mona Lisa,” he added.

The gallery quickly removed Mr. Siedentopf’s binoculars. (Tate has also started closing the contentious areas of the terrace earlier in the evenings.)

Neither the apartment owners contacted through Forsters, their lawyers, nor Tate would comment while the court case was continuing. Several residents coming in and out of the building declined to be interviewed when approached. One said he lived on the opposite side of the building to Tate Modern. “Thank God,” he added.

But on Saturday evening, there was little sympathy for the apartment owners’ case from people on the viewing platform. “If you can afford to live there, you can afford to live somewhere else, can’t you?” said Nimai Inniss, 24, who was showing two Spanish friends the view. “I think the sheer gall of people to move in somewhere like that and then complain about the fact there’s a museum across the road tells you a lot about where London’s going.”

Reinholds Bunde, a software engineer in London who is originally from Latvia, pointed out that the residents could look into each others’ homes and anyone could look into many of the apartments from the street below. “I don’t think they have a point,” he said, when asked about the case. “If you live in a city, and you have windows, people look in.”

“I’ve seen naked people from my flat, across the road, just getting dressed,” he added. “If you don’t close the blinds people look in. Someone’s probably seen me naked.”

As he spoke, a woman appeared in one of the windows and put some items into a dishwasher. “That’s the first person I’ve ever seen,” said Mr. Bunde, a regular visitor to the gallery. “They’re always empty.”

A few meters away, Milena Pinsel, a German tourist, leaning against a pillar kissing her boyfriend, turned to stare at the apartments just in time to see a child shake a yellow bedsheet out of the window, as if trying to get rid of crumbs. “It’s a little creepy,” she said, “but I’d still live there, even if people could look inside my living room.”

She didn’t mind being watched, she said. “I mean, we’re making out in public.”