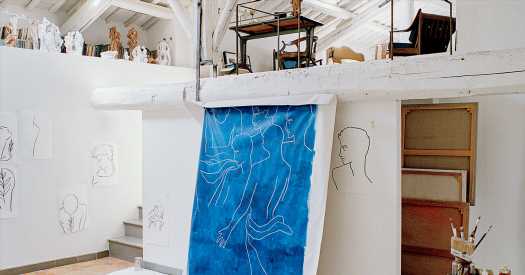 There are times, while perched in his attic studio in Rome, when the Italian artist Roberto Ruspoli imagines he’s Cosimo in Italo Calvino’s novel “Baron in the Trees,” a character who exchanges his predictable life of privilege for one of his own making in the treetops. Some evenings, the 1,000-square-foot space, with its skeletal pitched ceiling of centuries-old wooden beams, reminds him of an ancient boat, the kind on which Odysseus might have journeyed home to Ithaca.

The 49-year-old painter and mural artist has called Paris home for the last few years, but whenever he needs inspiration, he returns to this place high in the rafters of his childhood home, a 19th-century townhouse near the Spanish Steps. “The space is literally a blank canvas,” says Ruspoli, who washed the apartment in a chalky hue so he could sketch on the walls. “Working here helps me to stay in a clean mental state where the shapes and forms in my head are pure.” He gestures to a black charcoal drawing that occupies the entirety of a 15-foot wall above an overstuffed white sofa, one of the few pieces of furniture in the spare room. It’s a gestural yet sensual rendering of a classical godlike figure — part Picasso line drawing, part ancient Greek cave art — and one typical of Ruspoli’s fluid, figurative style, both in his small-scale paintings and large wall panels. 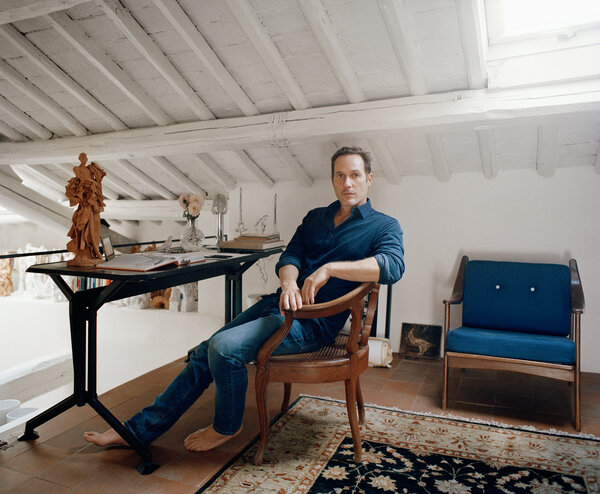 Raised by a Swiss mother and his stepfather — a Ruspoli, one of Italy’s oldest families — the artist demonstrated talent, which was readily nurtured, from a young age. At 18, in 1990, he moved to New York to attend the School of Visual Arts, where he studied with the abstract painters Michael Goldberg and Georgia Marsh, and danced all night at the weekly Jackie 60 parties at the nightclub Mother in the meatpacking district.

In 2018, after living briefly in London and making ceramic sculptures in Puglia for a year (a few of his pieces from this era are scattered around the apartment), Ruspoli settled in Paris. There, he shows his paintings and works on mural commissions for private residences and public spaces, including the dining room of Bambini, the new restaurant inside the Palais de Tokyo, and the entryway and rooms of the city’s first Soho House, which is set to open in the Pigalle neighborhood next month. “What I love about making large frescoes is that when I am in the right place, I am so concentrated and full of adrenaline — it’s like being a tightrope walker,” says Ruspoli, whose work is a nimble dance between the past and the present, his formidable heritage and the desire to travel his own path. “I love when it all comes together,” he says. “I’m 100 percent in the moment. Not in the past, and not in the future.”