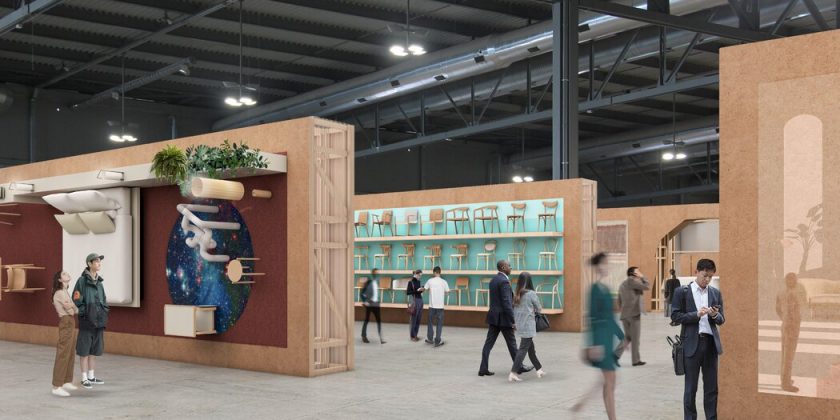 It has been 60 years since Salone del Mobile Milano, the premier annual exhibition of furniture, was founded, and two and a half years since crowds last gathered in Milan’s exhibition halls to admire the relentless creativity of international designers and manufacturers.

A spirit of innovation continues to drive the fair, not least in the way its organizers have responded to the pandemic. Sunday marked the opening of a special edition called Supersalone.

With 423 exhibitors, about a quarter of the usual number, Supersalone is a scaled-down affair, “but in a certain way it is bigger in terms of our capacity to experiment with the format,” said Stefano Boeri, a Milanese architect and the event’s curator. Exhibitor booths have been replaced with display walls that are hung with products and allow for free circulation. (The structures will be dismantled and recycled or composted after the fair.) And whereas Salone had previously been limited to members of the trade on most days, Supersalone welcomes the public throughout its five-day run, for a reduced entry price of 15 euros (about $18). For the first time, too, many of the goods will be available for purchase.

One Salone tradition has not been altered: Throughout the week of the fair, design is also being celebrated in shops, galleries, parks and palaces throughout Milan. What follows are some highlights. — JULIE LASKY

The Italian ceramics company Bitossi is celebrating its 100th anniversary this year, and has marked the occasion by opening the Bitossi Archive Museum at the company’s headquarters in Montelupo Fiorentino, near Florence, on Monday. The museum, which was designed by Luca Cipelletti of the Milan architecture firm AR.CH.IT, occupies more than 21,000 square feet of former factory space (with its industrial vibe preserved), and is filled with about 7,000 pieces from the company’s archive, as well as photographs and drawings that are intended as a resource for design professionals and the public.

On display are objects by Aldo Londi, Bitossi’s artistic director and contributor from 1946 to the 1990s — who designed the well-known Rimini Blu ceramic line, and who worked with another legend, Ettore Sottsass, beginning in the 1950s. Other works are by influential designers like Nathalie Du Pasquier, George Sowden, Michele De Lucchi and Arik Levy, and more recent collaborations with Max Lamb, FormaFantasma, Dimorestudio and Bethan Laura Wood, to name a few.

Although many of the pieces are displayed in groups, the museum also has a project room that highlights the work of a single designer, in this case a collection of whimsical takes on traditional ceramics by the French designer and artist Pierre Marie Agin.

In Milan, historic Bitossi ceramics are represented in “Past, Present, Future,” an exhibition at DimoreGallery, Via Solferino 11, through Friday. fondazionevittorianobitossi.it
— PILAR VILADAS

In his Milan debut, the London-based, Polish-born artist Marcin Rusak presents “Unnatural Practice,” a show of his ongoing work with discarded plant material. Items on display from his “Perishable” collection, made with flowers, and “Protoplasting Nature” series, using leaves, draw attention to his method of repurposing flora into light fixtures, furniture and decorative vases engineered to decay over time.

The exhibition, which is curated by Federica Sala, is “filled with many conceptual, unfinished pieces and ideas to examine our relationship with the objects that we collect,” the artist wrote in an email. It also features a new series of wall-hanging pieces; an installation that examines the influence of Mr. Rusak’s family business on his vocation (he is a descendant of flower growers); and signature scents tied to his pieces, created by Barnabé Fillion, a perfumer.

“Most of the projects we work on have common threads in terms of concepts and materials,” Mr. Rusak said. “The installation is something that brings you closer to looking at these objects the way I see them — as an ever-growing and decaying living catalog.” On view through Friday at Ordet, Via Adige 17. marcinrusak.com. — LAUREN MESSMAN

A furniture collection with a literary inspiration

When Annabel Karim Kassar, a London-based architect, chose to call her new furniture collection Salon Nanà after the titular courtesan in Émile Zola’s 1880 novel, “Nana,” it was not out of admiration for the character’s practice of driving men to distraction and death. Rather, Ms. Kassar, who was born in Paris, said the pieces were meant to evoke the sociability of late-19th-century literary salons.

Produced by the Italian company Moroso, Salon Nanà consists of lush sofas with oversize down cushions, a chaise longue and two groups of tables, some with Moorish patterns and decorative studs. The designs draw from Ms. Kassar’s three years in Morocco and more broadly from her long tenure in the Middle East, where her firm has offices in Beirut and Dubai. The sofas, for instance, are available in black-and-white striped fabric influenced by the djellabas, or robes, worn by Arab men. (Other options run to 1960s-style floral prints and corduroy reminiscent of 1970s men’s trousers.)

As for the character that inspired the collection, Ms. Kassar is willing to cut the female Second Empire invention of a male writer some slack. “I have no judgment about Nana being good or bad,” she said. “She had to endure a difficult life.” On view through Sept. 19 at Moroso’s showroom, Via Pontaccio 8/10. Moroso.it — JULIE LASKY

Trompe l’oeil, the centuries-old art world technique of tricking the eye, has been applied in a thoroughly modern way to the Ombra carpet collection for the Milanese company cc-tapis.

The Belgian couple who designed Ombra — Fien Muller, a photographer, and Hannes Van Severen, a sculptor, principals of the studio Muller Van Severen — said they wanted to get away from the idea that a rug was just a two-dimensional plane on the floor. “We hope to give movement in an interior, in a subtle way,” they wrote jointly in an email. “It was mainly a study of interesting uses of color and composition with paper and light. But you can’t call it pure trompe l’oeil, either.”

The designers worked on the project at their dining table during the pandemic, cutting, gluing and photographing paper and cardboard, using the light from their phones to create and study shadows.

The rugs, produced in Nepal, are hand-knotted in Himalayan wool and come in two versions: monochromatic or multicolor. They are produced in one size: 9.8 feet by 7.5 feet.

On view through Friday at Supersalone and at the cc-tapis showroom at Piazza Santo Stefano 10. cc-tapis.com — ARLENE HIRST

George Sowden, one of the founding members of Memphis, the ’80s radical movement that challenged modernism’s ruling aesthetic, is keeping up with the techno-Joneses. With his new company, Sowdenlight, the English-born, Milan-based designer intends to produce a wide selection of innovative lighting solutions.

First up is Shade, a whimsical group of multihued fixtures that capitalize on the light-diffusing, easy-to-clean properties of silicone. The modular lamps can be made to order, giving the customer a head-spinning array of form and color options.

Mr. Sowden, 79, is meanwhile developing a replacement for the classic Edison light bulb. This signature of industrial chic, he said, though “perfectly functional for incandescent fixtures,” is a manufacturing mistake when applied to LED technologies, “wasteful and inadequate.”

Shade is on view at the Sowdenlight showroom, at Via Della Spiga 52. Sowdenlight.com — ARLENE HIRST

The secret to eternal youth?

For the Italian bath fixtures company Agape, the inspiration for its Vitruvio mirror goes back to traditional stage dressing rooms, where a ring of incandescent bulbs helped stars put on their makeup — and believe they still appeared young. “The quality of illumination for the face and upper part of the body is close to perfection,” said Cinzia Cumini, who with her husband, Vicente García Jiménez, designed the rebooted version of the old-school vanity lights.

The name derives from “Vitruvian Man,” the Leonardo da Vinci drawing of a nude male figure inside a circle and a square, whose beauty also inspired them. But they employed modern technology to improve the experience. “Lighting bulbs are romantic but nowadays a little uncomfortable in the usage,” Ms. Cumini said. “LEDs allowed us to rethink with a contemporary approach.” The upgrade smooths the appearance of facial wrinkles sans heat, so you can put on your greasepaint without sweating profusely. The square mirrors are available in three sizes: about 24 inches, 31.5 inches and 47 inches per side. They are being displayed with other new products at the Agape 12 showroom at via Statuto 12. agapedesign.it/en — STEPHEN TREFFINGER

Reviving a minimalist radio by an Italian master

Typically, couples who receive unwanted wedding presents hide them, return them or give them away. Franco Albini had a different idea. When, in 1938, this neo-rationalist Italian architect and his bride, Carla, received an ungainly radio in a traditional wood cabinet that looked out of place in their modern home, Albini discarded the housing and mounted the electrical components between two supporting pieces of tempered glass. “Air and light are construction materials,” he later told his son Marco.

Albini eventually refined the design for commercial production, creating a minimal glass case for the electrical guts. Produced by the Swiss company Wohnbedarf, the stripped-down Radio in Cristallo was introduced in 1940. Now the furniture company Cassina has revived it with the identical proportions (about 28 inches high by 11 inches deep), adding a state-of-the-art speaker from the Italian company B&C. The radio has both FM and digital technology, Bluetooth capabilities, and a seven-inch display screen. The price is $8,235 (a limited-edition, hand-wired version sells for $14,770).

On view during Milan Design Week at the Cassina showroom at Via Durini 16. cassina.com — ARLENE HIRST

Shining a light on everyday objects

Turning the familiar into something new and compelling is a specialty for Seletti. In 2006, the Italian company commissioned the designer Alessandro Zambelli to create Estetico Quotidiano, a series of everyday objects like takeout containers, tin cans and baskets remade in porcelain or glass. These pieces were “figurative, quirky, accessible and deeply linked to the memories of the daily objects we all have in mind, yet with a twist and a sense of surprise,” said Stefano Seletti, the company’s art director.

For the new collection, called DailyGlow, Mr. Zambelli added the element of light. Objects cast in resin — including a toothpaste tube, a milk carton and a liquid-soap bottle — “dispense” LED-illluminated strands instead of their intended products. (Sardines and canned goods glow from inside their vessels.)

Mr. Zambelli said he wanted to capture “the essence of common shapes, the ones we see every day in the objects around us.” At the same time, by adding lights to the equation, he transformed the objects into “lamps that could narrate how the world is changing.”

The DailyGlow collection is being shown through Saturday at the Seletti flagship store at Corso Garibaldi 117. From $219. seletti.us — STEPHEN TREFFINGER

Warmhearted mirrors made of stone

Despite all their challenges, the last 18 months have given space for self-reflection and creativity. In that optimistic spirit, the Italian design firm Salvatori is presenting work that has been in development during the pandemic, including its first collaboration with the Brooklyn-based designer Stephen Burks.

Mr. Burks has fused his vibrant flair and cultural perspective with Salvatori’s expertise in stone surfaces to create a new collection of sculptural mirrors. The mirrors, which come in a tabletop size titled Friends (from $3,900) and a wall-hanging version called Neighbors (from $5,400), incorporate an array of colorful marble, including Rosso Francia (red), Giallo Siena (yellow) and Bianco Carrara (white). Holes in the anthropomorphically styled pieces also suggest cutouts in a mask, offering viewers an opportunity to see themselves in a new light.

“I was inspired by the variety of stone that was available to us — and how that spoke to the diversity of people who might see their image reflected on the surface,” Mr. Burks said in an email.

Although the products can be interpreted as masks, Mr. Burks said that they aren’t intended to obscure the face. “I’m hoping the mirrors will remind people of how expressive they can be.” Through Sept. 10, at Salvatori’s Milanese showroom at Via Solferino 11; salvatoriofficial.com — LAUREN MESSMAN