“The Best Man: The Final Chapters,” a new series sequel to the popular films, deepens the franchise’s female characters, introduces new faces and tackles a wider range of issues. 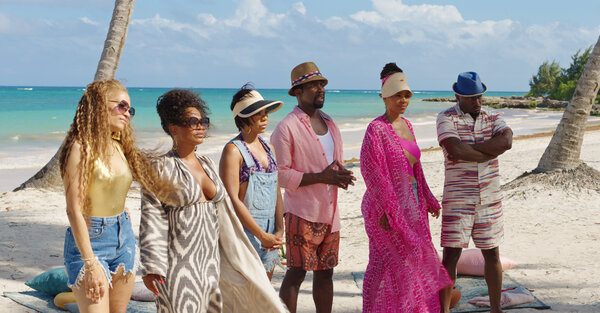 The broom-jumping romantic comedy “The Best Man” debuted in theaters in 1999, delivering a bougie Black bonanza that would prove to have true staying power.

For his film directing debut, Malcolm D. Lee assembled for “The Best Man” a cast of young Black actors, anchored by Morris Chestnut, Taye Diggs and Nia Long, to play successful late-20s college buddies navigating the messier aspects of love and friendship as one couple prepares to wed.

There was no encroaching systemic racism for them to overcome and there were no societal ills looming large (unless you count the male characters’ misogynistic views). It was just two hours of beautiful people representing every shade of brown, sporting their best Y2K wear, thriving professionally and being decadently self-involved to the beat of a neo-soul soundtrack.

“It was such an important film during that time for the culture,” Long said. “We, as Black people, were seeing ourselves in a different way for the first time, and were thirsty for that.”

Lee, who also wrote the film, said he wanted Black filmgoers to “feel seen, and to normalize what I know as being Black in America.”

The film grossed an estimated $34.5 million (on a budget of $9 million), helped start the careers of Regina Hall and Sanaa Lathan, and became a Black rom-com classic, joining the ranks of Diggs’s 1998 star-making vehicle “How Stella Got Her Groove Back” and the Long-led 1997 drama “Love Jones.” The 2013 follow-up, “The Best Man Holiday,” doubled its predecessor’s box office numbers with a Christmas-themed tear-jerker that reunited the age-defying actors.

Now, more than two decades since they danced the Electric Slide to Cameo’s “Candy” during the first film’s climactic reception scene, the ensemble is back together for another installment. “The Best Man: The Final Chapters,” a limited series premiering on Peacock on Dec. 22, picks up where the sequel left off, in the aftermath of one character’s tragic loss and amid the shock of yet another wedding announcement. (And still, the actors seemingly have not aged a lick.)

“It’s kind of amazing that we’re all alive and healthy, and that we’re all thriving in this business,” Lathan said. “When we came up, there were literally a handful of us working and fighting for the same jobs.”

With eight hourlong episodes to work with (all dropping at once), Lee and the other writers expanded the story to give equal time to the women, introduce some new faces and tackle a more robust range of issues.