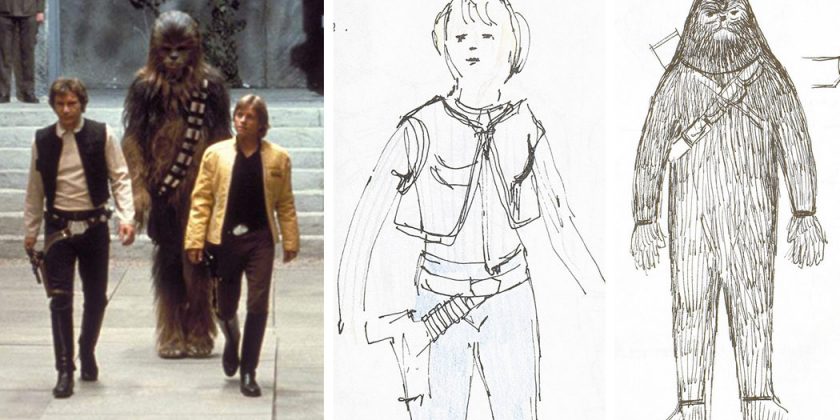 When George Lucas conceived “Star Wars” in the early 1970s, he had to create an entirely different look for an entirely different galaxy. That included the costumes. The film’s production illustrator, Ralph McQuarrie, did the groundwork. The execution went to John Mollo, a British military illustrator and cinematic wardrobe consultant who would win the 1978 Academy Award for Best Costume Design for Mr. Lucas’s space epic.

On Dec. 11, Bonhams will auction Mollo’s original sketchbooks for “Star Wars” and its sequel, “The Empire Strikes Back,” in its “Designing an Empire: The John Mollo Archive” sale. The books for the first movie are expected to fetch $130,000 to $190,000, the sequel, $100,000 to $160,000. Also up for grabs are sketches and ephemera from other Mollo movies including “Barry Lyndon,” “Alien,” “Chaplin” and “Gandhi,” for which Mollo won his second Oscar.

The time pressure on the first “Star Wars” was intense for Mollo, who died last year. “I think my father put it all together in six weeks,” Mollo’s son, Tom, said in an interview earlier this month. “He always said he found it frighteningly difficult working with people who were indecisive, and Lucas was not indecisive. He’d put the sketches before him and he’d say yes or no.”

Lucas “said in a memorable understatement, ‘I don’t want anyone to notice the costumes,’” John Mollo wrote in a foreword to “Star Wars Costumes: The Original Trilogy” by Brandon Alinger. “Unlike period films, where there are limits to what is historically correct, there are none in science fiction, and the director can ask for any outlandish thing he wants with the cost being his main handicap. George wasn’t like that. He strongly believed that the costumes should be real clothes, and that if they were noticed too much they would distract the attention of the audience.”

Here, from John Mollo’s sketchbooks, are prototype drawings of six major figures from the original “Star Wars” (a.k.a. “Star Wars: Episode IV — A New Hope”), with edited excerpts from the interview with Tom Mollo.

The Noblest Jedi of Them All 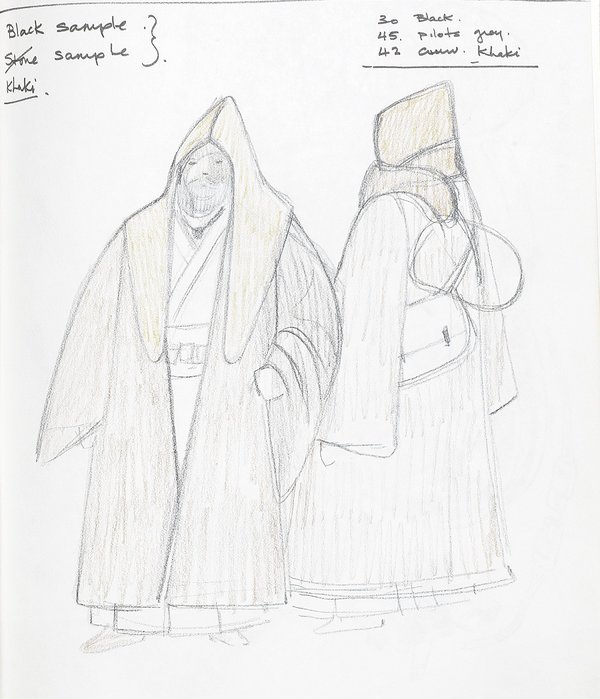 George Lucas envisioned the Jedi master Obi-Wan Kenobi as an unlikely combination of monk and samurai warrior. Before Alec Guinness portrayed him, Mollo depicted his outfit as bulkier and more heavily draped. The “slightly worn” earth tones of the final product — the “tan and sandy stuff” of Guinness’s relaxed yet noble raiment — Tom Mollo said, represent a soft, humanistic contrast to the stark slabs of color worn by his imperial enemies.

“My father saw him as a sort of medieval elder or priest,” Mollo said. “There’s a story that Alec hadn’t committed to the film until he saw the designs, and that helped sell him on the role. But he did very well out of it. He was one of the few people who got a cut of the action. So perhaps my father can be credited with some of that.”

“The sense was that he was cowboylike,” Mollo said. “He was probably the most Western of the characters.” The giveaway, Mollo said, is that “he had his holster slung low.” Han Solo was therefore quite at home at Mos Eisley Spaceport, which Obi-Wan called a “wretched hive of scum and villainy.”

“That’s why I think that cantina scene is so amazing,” Mollo said. “It’s very saloonlike. My father was in large part responsible for the look of that scene.”

The Big-Screen Bigfoot in the Shag Carpet

“There are almost as many drawings of his bandoleer belt as there are of the costume itself,” Tom Mollo said. “He certainly put a lot of emphasis on the accouterments. I think that’s the biggest John Mollo feature — the military kit.”

The Dark Side of the Force

For Darth Vader (played by David Prowse and voiced by James Earl Jones), Mollo went to the London costumers Bermans and Nathans for ideas. In the end, he said, he tapped “the ecclesiastical department for a robe, the modern department for a motorcycle suit and the military department for a German helmet and gas mask” from World War II.

“I think that sketch was done right around the time he went to those departments,” Tom Mollo said. “It’s only just beginning to take shape. It’s a really early one.” Barely defined, for instance, are Vader’s famous chest box and belt: “He’s feeling his way around. You can see the progression.”

Only 5 years old when “Star Wars” came out, Tom Mollo wasn’t especially freaked out by the sinister Vader. The Jawas, those tiny, scummy scroungers with glowing eyes, were another matter. “I remember vividly their prototype heads. I remember being very scared of those.”

The Gang That Couldn’t Shoot Straight

Faceless, mindless, subservient and rotten as marksmen, Imperial Stormtroopers embodied dehumanization. John Mollo may have put more effort into them than any other “Star Wars” supernumeraries.

“What you notice when you go to the sketchbooks is that they take up a good deal of room,” Tom Mollo said. “When he won his Oscar, he said it wasn’t so much a matter of costume design as mechanical engineering. But he knew how medieval armor worked. He obviously put a lot of time into solving problems around them. He was so frantically busy getting the Stormtroopers done. As a child I thought the Stormtroopers were excellent in every way.”

But why cast these extragalactic Brownshirts in virtuous white? Tom Mollo suggested a study in contrast: “Visually, it’s incredibly powerful, isn’t it, when the black Darth Vader appears and he’s surrounded by these white Stormtroopers?”

The Gutsy Damsel in Distress

If the blank slates of Stormtrooper armor signaled blind obedience to authority, the flowing white dresses of the beautiful, heroic Princess Leia Organa signified morality and truth. For most of “Star Wars,” Carrie Fisher wore a futuristic cross between a nun’s habit and academic garb.

“There’s a purity to that costume, isn’t there?” said Tom Mollo. “What’s funny is that my father didn’t have a background in fashion design. And yet that’s one of the iconic female costume designs of all time. I think it’s one of his standouts. Plenty of people hire it for Halloween.”

This sketch, a variation on the Leia theme, is of the formal gown that the princess wore at the awards ceremony at the end of the film. Mollo suggested that this gala version “takes its inspiration from classical figures, Greek or Roman, which wouldn’t surprise me, knowing Dad.”

A footnote: John Mollo did not work on “The Return of the Jedi,” the final installment of the original “Star Wars” trilogy. Of that film’s many costumes, the best remembered is probably the daring metallic bikini that Carrie Fisher wore when Jabba the Hutt enslaved her. Tom Mollo said, “I couldn’t see my father coming up with that.” 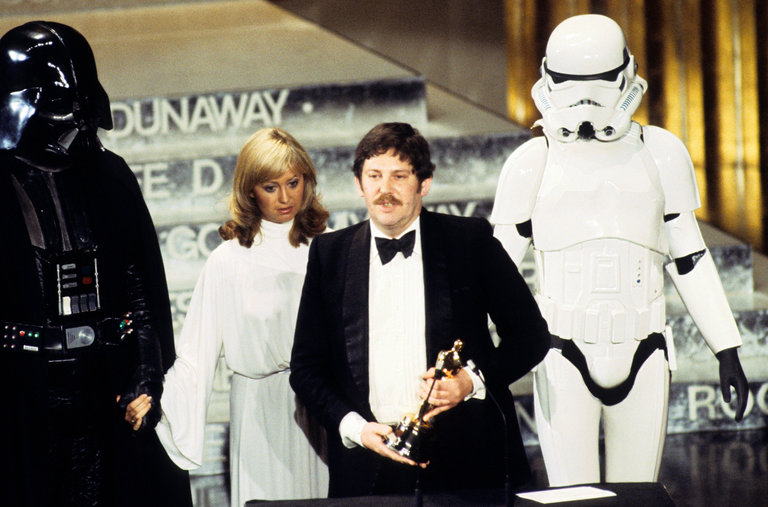 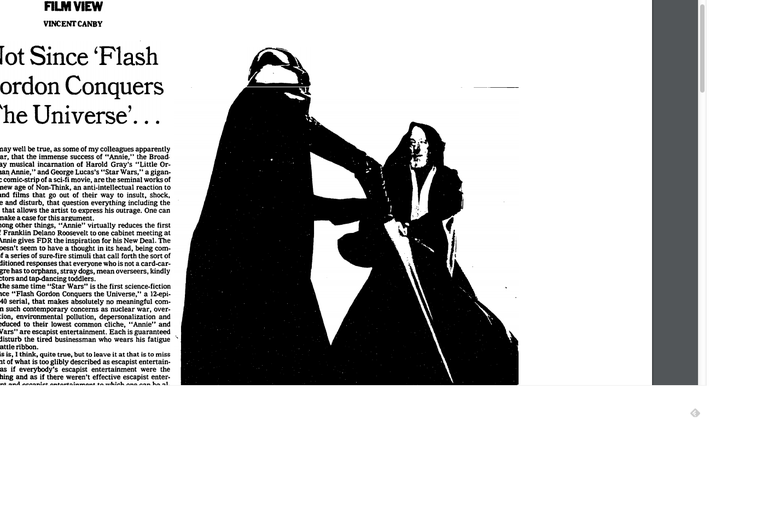 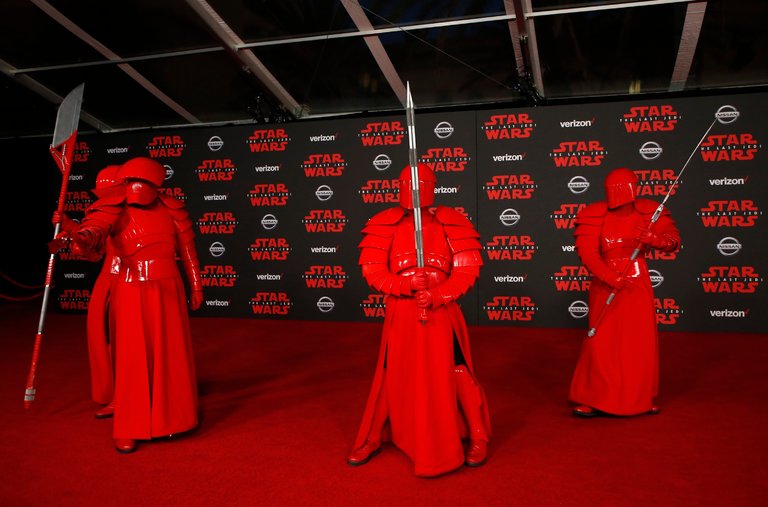 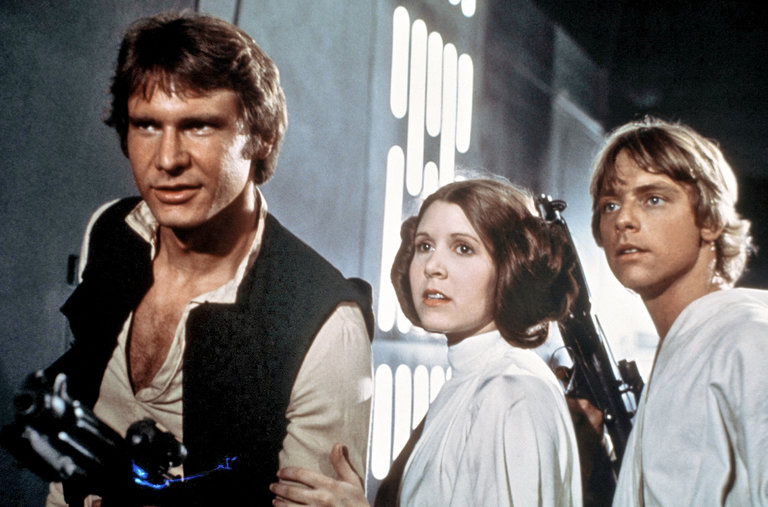