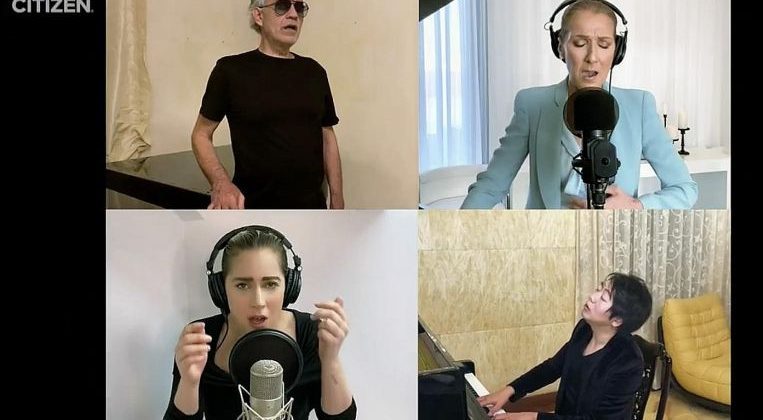 From covers of songs like Lean On Me to originals like Elton John’s I’m Still Standing, the theme was hope, positivity and encouragement as an A-list line-up of music stars dipped into their repertoires and other classic songs for One World: Together At Home.

The global event, which was broadcast live yesterday morning Singapore time, was to celebrate healthcare and front-line workers around the world and support the United Nations Foundation’s Covid-19 Solidarity Response Fund.

It kicked off with a one-two punch from the event’s curator, American pop star Lady Gaga, who urged everyone to “smile though your heart is aching” with a take on Nat King Cole’s Smile.

She was followed by fellow American Stevie Wonder, with an emphatic tribute to Lean On Me by Bill Withers, who died recently.

It set the tone for the rest of the event, which was hosted by three of the biggest late-night television show hosts in the United States – Jimmy Kimmel, Stephen Colbert and Jimmy Fallon – who injected the right amount of humour and gravity when necessary.

Interspersed with videos of do-gooders and video calls to healthcare workers and medical experts, there was the consistent message to stay home and flatten the curve in order to “give scientists the time to find a cure”, as one doctor put it.

It was a sombre reminder that the coronavirus is still a clear and present danger.

But beyond the seriousness, there were some serious singing chops on display, as American pop star Lizzo lit up the screen with her cover of Sam Cooke’s A Change Is Gonna Come.

Meanwhile, American singer John Legend and British crooner Sam Smith served up the cross-continental collaboration of the day with their impeccable harmonising on feel-good number Stand By Me by Ben E. King.

Perhaps the most intriguing part of it all was getting to peel back the curtain and peek into the lives of these superstars who were performing from their homes.

British singer John, for instance, offered a rousing rendition of his song I’m Still Standing, played on a grand piano in his garden.

ONE WORLD: TOGETHER AT HOME

Meanwhile, Pearl Jam frontman Eddie Vedder managed to make a church organ look cool by playing River Cross on the instrument – which just so happened to be in his music room.

Pianos were a popular choice. Billie Eilish and her brother Finneas sang a trademark whispery version of Sunny, popularised by Marvin Gaye, while Taylor Swift drew on one of her own songs – the emotionally charged Soon You’ll Get Better.

The special was preceded by a six-hour pre-show featuring performances by the likes of singers Adam Lambert, Niall Horan and Jennifer Hudson.

Besides performances, the two-hour special was also peppered with messages and calls to action from celebrities such as Bollywood star Shah Rukh Khan and former US first lady Michelle Obama.

In a video message, Beyonce – who did not perform – highlighted the disproportionately high death rates in the African-American community due to the virus. She also thanked delivery workers, postmen and sanitation employees.

According to organisers, about US$128 million (S$182 million) has been raised so far, with US$55.1 million going to the Solidarity Response Fund and US$72.8 million going to local and regional responders in the US.

Ending the show with a soaring four-part harmony were Italian tenor Andrea Bocelli and Canadian crooner Celine Dion, who reunited to perform their 1999 duet The Prayer, but this time accompanied by Lady Gaga, Legend and renowned Chinese pianist Lang Lang.

While the number of viewers has yet to be revealed, this event that connected people all over the globe has proven that even if they are isolated in their homes, they are anything but alone.

• Watch the concert at str.sg/JMwV

Read the latest on the Covid-19 situation in Singapore and beyond on our dedicated site here.

Get The Straits Times app and receive breaking news alerts and more. Download from the Apple App Store or Google Play Store now.