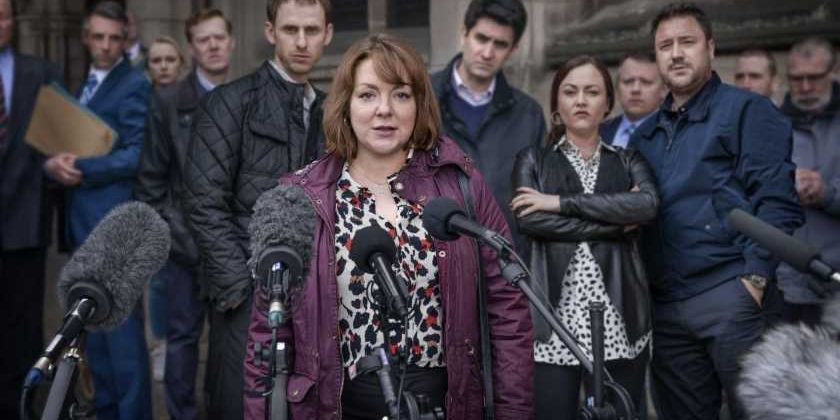 The new factual BBC drama will go beyond the headlines that surrounded the case of serial killer Stephen Port, and tell the story through the families and friends of the victims.

BBC have a jam-packed roster of fresh, new series for us to get stuck into later this year and in 2022. From A Very British Scandal to The Girl Before, BBC One continues to be the destination for hard-hitting dramas.

Coming to our screens in the first week of the new year will be Four Lives, a factual drama focusing on the fight for justice that the families of Stephen Port’s victims have had to endure.

Port, who has been labelled as the ‘Grindr killer’, is currently serving a life sentence for murdering Anthony Walgate, Gabriel Kovari, Daniel Whitworth and Jack Taylor in Barking over 16 months, between June 2014 and September 2015.

The BBC drama will uncover the point of view of the families and friends of the four young men. The series was originally announced back in 2019 but had to be delayed because of an inquest into the Metropolitan Police’s investigation into Port’s crimes.

The nine-week long inquest recently found that there were failures which “cannot be overlooked”. The inquest jury also stated that there were “fundamental failings in these investigations from the beginning”.

Here’s everything we know about Four Lives.

What is Four Lives about?

The factual drama is based on the real-life victims of Stephen Port, who is also known as the ‘Grindr serial killer’.

The series, which is written by Jeff Pope and Neil McKay (The Moorside, Appropriate Adult) will “go beneath the headlines to shed new light on this story by telling it from the point of view of the families and friends of the four young men – Anthony Walgate, Gabriel Kovari, Daniel Whitworth and Jack Taylor – who were murdered by Stephen Port.

“Four Lives focuses on the fight to uncover the truth about what had happened to their lost sons, brothers and loved ones in the face of a now widely condemned police investigation.”

What is the real-life story behind Four Lives?

While the three-part drama is set to be insightful and heart wrenching, it is based on harrowing true events.

Over a 16-month period between 2014 and 2015, Port killed four men by giving them overdoses of the “date rape” drug gamma-hydroxybutyrate (GHB) at his east London home.

The victims met Port via dating websites such as Grindr and were taken to his flat in Barking, east London, for sex. Their bodies were all found dumped in or near a graveyard within 500m of Port’s home.

In 2016, Port was sentenced to life imprisonment after denying the total of 29 charges.

The lasting impact of the case is one that highlights the failings of the investigation and the Metropolitan Police.

The deaths were not regarded as suspicious until weeks after the fourth murder and the case has since been labelled as “one of the most widespread institutional failings in modern history” by the men’s families.

In the recent inquiry, the court heard how the Metropolitan Police failed to carry out basic checks, send evidence for forensic examination and did not “exercise professional curiosity” while Port continued to prey on further victims.

While Coroner Sarah Munro QC ruled out homophobia as an issue for the jury to consider, Neil Hudgell, a solicitor representing the victims, has said: “Our firmly held belief is that the Metropolitan Police’s actions were, in part, driven by homophobia.”

The inquests, which were held at Barking Town Hall, were told that police had ignored multiple chances to uncover Port as being responsible for the first murder of Anthony Walgate, 23, in June 2014. The result of which could have meant that the later deaths of Kovari, 22, Whitworth, 21 and Taylor, 25, were preventable.

The jury also found that a murder team should have taken over the first inquiry.

Who will star in Four Lives?

Also joining the cast is Jaime Winstone (Five Daughters, Babs) as Donna Taylor, one of the sisters of Jack Taylor.

On joining the cast, Stephen Merchant said: “This is a story that can’t be ignored – how four young lives were lost and their families’ brave attempt to uncover what happened.

“This factual drama will shed light on their story, so it’s a privilege to be a part of telling it with the brilliant combination of Jeff Pope, Neil McKay and the BBC.”

“Along with the other families, Sarah went through so much heartache and it would have been easy for her to just accept what she was being told by the police, but something inside made her keep fighting for her son.”

Is there a trailer for Four Lives?

The newly released trailer for Four Lives features Smith as central character Sarah Sak and is a tense watch. She cries: “I think my son’s been murdered,” on the phone to a police officer who tells her that she “can’t start saying that.”

When and where will Four Lives be available to watch?

Four Lives will be coming to our screens in the new year – the series will premiere on 3 January at 9pm on BBC One and BBC iPlayer. It will then air over three consecutive nights, with all episodes on BBC iPlayer from the same time.

Four Lives will air on Monday 3 January at 9pm on BBC One and BBC iPlayer.