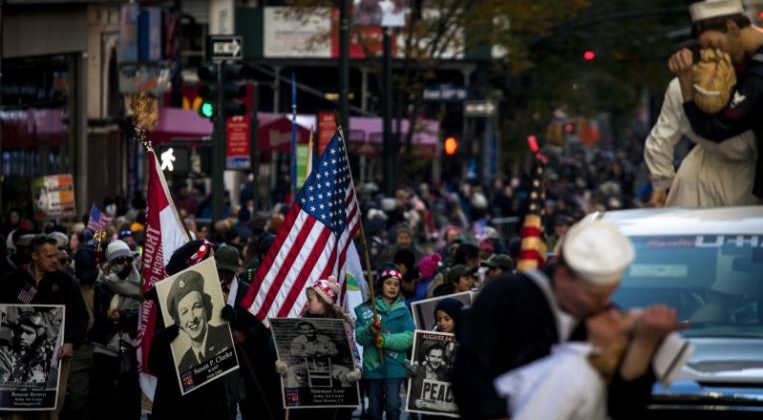 WASHINGTON (WASHINGTON POST) – A century ago, the four-year-long nightmare eventually called World War I finally came to a halt on Nov 11, 1918.

That date now goes by several names – Armistice Day, Remembrance Day, Veterans Day – and on it the world honours the fallen, which in the case of the supposed “War to End All Wars” amounts to roughly 20 million soldiers and civilians.

That number doesn’t include the additional 21 million people who were wounded, sometimes grievously. And for what? The war accomplished only one thing beyond doubt: In the muddy trenches of France and the killing fields of Flanders, the 19th century slowly died. Never such innocence again.

The prose anthology spotlights, among much else, Arthur Conan Doyle’s account of Sherlock Holmes’ war service, His Last Bow, and Arthur Machen’s The Bowmen, which gave rise to the legend of the Angels of Mons.

Even now, it is said, some people still believe that an English squadron, under intense attack, was miraculously saved by a company of spectral archers. German soldiers were even, supposedly, found dead from arrow wounds.

Walter’s complementary and equally superb poetry collection is organised by subject – In Training, In Trenches, Rendezvous With Death – and reprints the work of unfamiliar poets as well as famous ones such as Wilfred Owen, Rupert Brooke, Isaac Rosenberg and Edward Thomas. None of these four young Englishmen survived the war.

Those who did, such as Robert Graves and Siegfried Sassoon, were changed men.

In the former’s Good-Bye To All That and the latter’s autobiographical Complete Memoirs Of George Sherston (comprising Memoirs Of A Fox-Hunting Man, Memoirs Of An Infantry Officer and Sherston’s Progress – all three available from Penguin), the horrors of no man’s land are vividly, harrowingly relived.

Of course, French and German combatants also brought out accounts of their analogous experiences, notably Erich Maria Remarque’s All Quiet On The Western Front, Henri Barbusse’s anecdotal but grim Under Fire and Ernst Junger’s Homeric paean to martial valour, Storm Of Steel.

While the above writers, poets and memoirists are, for the most part, familiar chroniclers of World War I, this is not true of W.F. Morris (1892-1975).

Yet in 1929 Morris published an extraordinary novel that merits rediscovery. Not that Bretherton: Khaki Or Field Grey? or, as it was titled in its American edition, G.B.: A Story Of The Great War, is completely unknown. British thriller writer Eric Ambler listed it among his top five spy thrillers.

In fact, Bretherton covers nearly every aspect of the 1914-1918 conflict: the gallows humour of the English Tommies, night manoeuvres in France, romance-filled interludes away from the front, the Battle of the Somme, a suspenseful escape from a prison camp.

In the closing hours of the war, a young officer named Gurney happens upon a bombed-out chateau from which he hears Just A Song At Twilight being played on a piano. After he cautiously enters the house, he discovers a beautiful young woman in an evening dress dead on a sofa. At the piano is a dead man wearing the uniform of a German general.

When Gurney looks more closely at him, he undergoes “the greatest shock of my life.” The face is that of his friend and comrade G.B. – Gerard Bretherton – with whom he had chatted briefly just the day before. What does it all mean? There appear to be two equally unlikely alternatives: “G.B. was either a British spy in the German Army or a German spy in the British Army.” Or could there be another explanation?

Morris now shifts narrators, as an officer named Baron recounts certain enigmatic events back in 1915, most notably the disappearance of an important map. Is someone passing information to the enemy? To the reader, G.B. appears the likely double agent. After all, he passed much of his youth in Germany and speaks the language perfectly. He sometimes even defends the Bosche as simply doing his duty as the Tommies are doing theirs.

Throughout the novel, slang-filled repartee alternates with scenes of tenderness, desperation and shock.

On one night patrol, Baron is crawling on all fours when he encounters a dead body. “My forearm came down on the faded grey cloth. Down it went, but not against resistance; it clove through a damp sticky substance like rotten pears to the earth below, and I snatched it away covered with green frothy slime, having raised a stench that is indescribable.”

Meanwhile, at the front lines, the ant-like construction of trenches never ceases: “Endless streams of men coming and going; staggering under heavy loads; half-naked and sweating; manhandling guns into pits; digging, marching, falling into shell-holes, cursing, laughing, singing softly to the orchestra of the guns.”

When Baron later peers down the barrel of his rifle at a German charging toward him, he squeezes the trigger until “the sights ran unimpeded to the opposite hill-slope.”

Army life also features the exhilaration of a return home on leave, first for Baron, then for G.B., both of whom are attracted to Gurney’s twin sister, Helen. Later, a German colonel named Otto von Wahnheim falls in love with the widowed Duchess of Wittelsberg-Strelitz, his lieutenant’s twin sister.

Bretherton is a haunting mystery-thriller, of considerable narrative complexity, and a lost masterpiece of World War I literature. One should read it and weep.