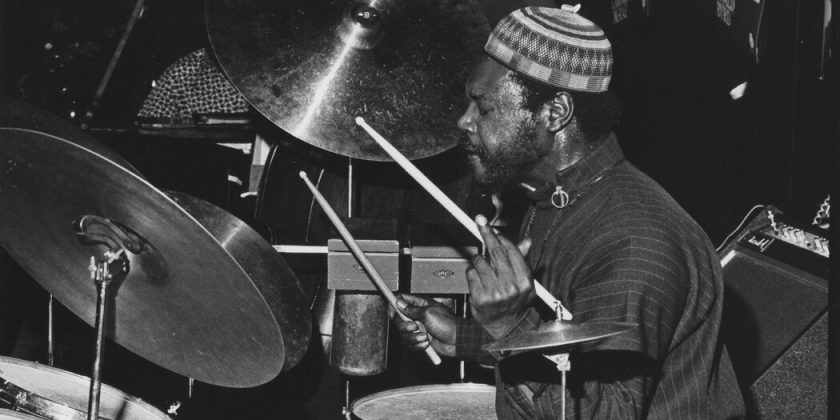 In 1991, as part of its Magic Music Days initiative, Disneyland hosted the International Musical Saw Festival. Fifty people who played the instrument — the actual tool, held between one’s knees and stroked with a violin bow — descended on Anaheim, Calif., to compete in different genres. Roy Brooks, a drummer from Detroit, took home third place in the pop/jazz category.

Two decades earlier, while touring Europe with Charles Mingus’s band, Brooks received a more prestigious honor: a regular feature called “Blues for Roy’s Saw,” where the drummer would step away from his kit and solo on his side instrument. (Instead of a bow, Brooks used a mallet.)

Brooks, who died in 2005 at 67 after a life of ecstatic highs and perilous lows, worked with jazz legends like Horace Silver, Yusef Lateef and Mingus; he also had bipolar disorder, and served a sentence for felony assault from 2000 to 2004. On Friday, a previously unreleased Brooks live album from 1970 titled “Understanding” arrives on vinyl, providing an opportunity to deepen listeners’ comprehension of his talent. (Digital and CD releases will come out July 23.)

The seven-track “Understanding” was made at Baltimore’s Famous Ballroom, where Brooks and his band had recorded their lauded live set “The Free Slave” only six months prior. The concert features the trumpeter Woody Shaw and the bassist Cecil McBee — holdovers from the night that resulted in “The Free Slave” — plus Harold Mabern on piano and Carlos Garnett on tenor saxophone.

Despite similar personnel and only a brief interval between engagements, “The Free Slave” and “Understanding” are worlds apart. Where the first release is a euphoric joy ride that touches on funk and odd-time grooving, the new album is an intense, hypnotic journey that seems immovable even at its gentlest moments. What a difference a half-year makes.

Zev Feldman, a co-producer of “Understanding,” was struck by the LP’s sprawling nature. A typical track runs about 20 minutes, making room for multiple unhurried solos. (Brooks breaks out the saw on “Prelude to Understanding.”)

Brooks, who grew up in Detroit playing basketball and in jazz bands, was in a pivotal place in 1970. He had just wrapped a three-year stint with Lateef (he can be heard on “The Golden Flute” and “The Blue Yusef Lateef”) and was newly a member of M’Boom, the Max Roach group featuring seven or more percussionists.

His own rhythm section was unshakable, but never rigid. Brooks and McBee met in the early ’60s at a Sunday jam session in Detroit hosted by Alice McLeod — soon to be Alice Coltrane — but they truly connected while playing in Lateef’s group. When Brooks realized he could trust McBee to handle the heavy time-keeping, new paths seemed to open up for both musicians.

“He loosened up and would play things that would loosen me up,” McBee said in an interview. “Although you understood your responsibility to keep the flow. Once you understand that, and know what that is — and you both are clear about that — then you don’t have to do it. Just let it go. ’Cause you can feel it.”

Cory Weeds, the founder of the label Reel to Real, which is releasing the album, sees the live recording as a perfect primer for understanding Brooks’s accomplishments.

“This record sort of encapsulates his whole career,” said Weeds. “Like, ‘OK, now I sort of get the trajectory of Roy Brooks.’ From growing up in Detroit, and then moving to New York, and doing those straight-ahead dates, to this.”

In the years after the performance that yielded “Understanding,” Brooks returned to Detroit and formed the Aboriginal Percussion Choir, which featured 20 drummers, and developed a solo performance called the Mystical Afronaut, which found him playing along to a Joe Louis fight and jamming with battery-powered toys. His avant-garde leanings didn’t begin in the mid-70s, though; earlier, he had invented the Breath-a-Tone, which connects plastic tubes to a tom-tom. The instrument can be heard near the end of “Billie’s Bounce,” from “Understanding.”

“I remember being a kid, watching him solo, and being scared to death,” Brooks’s son Raheem Brooks said in an interview. “Like, ‘Is he going to have a heart attack?’ So much force would go into it — you know, when he solos, he goes in.”

Brooks pushed himself to the limits onstage and off, and as the decades passed, he struggled to manage his mental illness.

“You read some of the stuff, and I’ve seen stuff like, ‘The Wild Man on the Drums,’ or something like that,” Raheem Brooks said of how he’d seen his father described. “It really paints a picture that’s negative.” But Brooks recalls his father as a tireless, disciplined artist, whose passion for music was all-consuming.

Brooks’s drive to play endured for decades. Mark Stryker, who wrote part of the liner notes for “Understanding” as well as the 2019 book “Jazz from Detroit,” said he saw Brooks give a transcendent performance in the ’90s.

“When I saw him play, you felt as if you were in the presence of a spirit,” Stryker said. “There was a shamanistic quality to Roy’s presence and his playing. You absolutely felt that. There was something beyond music happening with Roy.”

The promise of great jazz bands, he added, is “that you can have the same players playing the same tunes in the same place and for some reason, there’s this extra jolt of energy and electricity and creativity that pushes the music into a higher plane of invention.” On “Understanding,” he said, “I think that that happened.”